On 12 March 2013, a Tunis Air Airbus A320 landed on runway 08 at Paris Orly and, having slowed to just over 40 knots, were expecting, despite the covering of dry snow and some slush pre-notified and found on the runway, to vacate it without difficulty at the mid point. ATC then requested that the aircraft roll to the end of the runway before clearing. However, after a slight increase in speed, the crew were unable to subsequently slow the aircraft as the runway end approached and it overran at a low groundspeed before coming to a stop 4 seconds later.

On 12 March 2013, an Airbus A320 (TS-IMC) being operated by Tunisair on a scheduled passenger flight from Djerba to Paris Orly landed normally on runway 08 at destination in day Visual Meteorological Conditions (VMC) but was unable to clear the runway after encountering a deterioration from the braking effectiveness encountered earlier on the snow and slush-covered surface. An overrun at taxi speed occurred and the aircraft came to a stop with the NLG off the runway but the MLG still on it. Passengers were disembarked to ground transport using steps positioned at the left hand rear door. 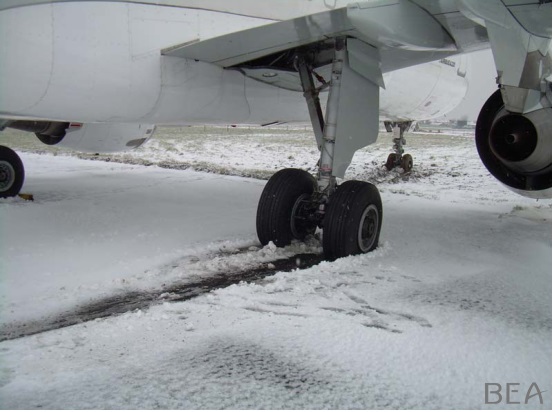 The aircraft positioned partly off the runway after the overrun showing the depth of contaminant on the runway at its end. Reproduced from the Official Report

An Investigation was carried out by the French BEA.

It was established that the Automatic Terminal Information Service (ATIS) which had been obtained as the destination was approached advised that runway 08 was the only active runway and was covered with dry snow and that it should be vacated either via runway 02/20 (approximately at the midpoint) or taxiway at the runway end. ATC then advised that braking action on the runway was "medium to poor". The crew were aware that there was slush on the runway. During the approach, the crew discussed the risk of a runway excursion and confirmed the previously-advised braking action. The First Officer was PF. The autobrake was set to 'medium' and the Reference Speed (Vref) of 137 KIAS was set. The final approach was stabilised and the landing normal. During the landing roll, the Captain took control in accordance with the operator’s procedures with the intention of vacating via runway 02/20. As the aircraft decelerated through 70 knots groundspeed, the autobrake was disconnected and shortly afterwards the thrust reversers were also stowed.

As the aircraft approached the intended intersection turn off at just over 40 knots groundspeed, the controller asked the crew to vacate at the end of the runway not the intersection, a further 1700 metres. The aircraft continued as instructed and the Captain slightly increased thrust so that the ground speed increased to and stabilised at around 60 knots. Shortly after reaching a position 500 metres from the end of the runway, braking re-commenced but the effect, even with increased brake pressure, was not enough to reduce the speed and the end of the runway was approached at a ground speed of 35 knots. The Captain then applied the parking brake and tried to control the direction using the rudder pedals. The overrun occurred at a groundspeed of 17 knots and the aircraft subsequently stopped with the MLG still on the paved surface. It was apparent that an emergency evacuation was not required and after a delay of forty-five minutes, passengers were disembarked to ground transport using steps placed at the rear left hand door. After the overrun, the Captain described the braking action towards the end of the runway as "very, very poor".

It was found that prior to the landing, there had been "continuous and variable snowfall since 0800 local time with a generally N to NNE surface wind of around 10knots. From 15 minutes prior to the touchdown, "precipitation occurred in the form of continuous light snow, with a surface wind from 020 degrees at about 6 knots".

Airport Operator ADP advised that the current braking action communicated by them to ATC for the full length of runway 08 at the time of the landing and overrun was "medium". Airbus used the recorded braking performance over the final third of the runway to determine what the actual braking action had been and found that it had been "medium to poor" - the same as had been confirmed by ATC six minutes before landing.

The Investigation noted that there was a Quick Reference Handbook (QRH) memory procedure for "loss of braking" which required the crew, regardless of the speed it occurs, to fully activate the thrust reversers and apply maximum brake pressure. If there is still no braking, the procedure requires the application of the parking brake several times in succession.

The Findings of the Investigation were as follows:

The Conclusions of the Investigation were that:

The Final Report was published in English translation on 24 September 2014 following initial publication in French on September 2014. No Safety Recommendations were made.