On 1 October 2013, an Airbus A320 took off from a runway intersection at Porto which provided 1900 metres TORA using take off thrust that had been calculated for the full runway length of 3480 metres TORA. It became airborne 350 metres prior to the end of the runway but the subsequent Investigation concluded that it would not have been able to safely reject the take-off or continue it, had an engine failed at high speed. The event was attributed to distraction and the inappropriate formulation of the operating airline's procedures for the pre take-off phase of flight.

On 1 October 2013, an Airbus A320 (HB-IOR) being operated by Belair Airlines on an Air Berlin flight from Porto to Palma de Mallorca as flight AB7785 became airborne close to the end of the runway at Porto after an otherwise uneventful departure in day VMC. Thereafter the flight was completed without further event.

Because of the late initial notification, by the time the Investigation started, relevant data from both FDR and CVR were no longer available and neither were relevant ATC radar and communications recordings. However, relevant recorded data from the QAR and both EFBs was available and used.

It was established that prior to the arrival of the loadsheet, the Captain had provisionally used an estimate of the take-off mass to calculate the required engine thrust for take-off from runway 17 using his EFB. Since an intersection take-off from 'F' (see the aerodrome diagram below) with 1900 metres TORA would require full thrust and since reduced thrust could be used if the full runway length (3480 metres TORA) was used, he input the full length take-off data into the FMGS with the awareness of the First Officer.

When the loadsheet subsequently arrived, the actual take-off mass was 3.5 tonnes less than the earlier estimate and during the subsequent take-off briefing based on a full length take-off, the Captain "resolved to re-assess the option of an intersection take off". He carried out the calculation on his EFB and found that a reduced thrust take-off would now be possible from intersection 'F', albeit with a smaller reduction than would apply to a full length take-off. At this point, the arrival of the handling agent advising that they were one passenger down led him to record the results on a piece of paper, aware that reprogramming of the FMGS was still to be done. He then left the flight deck "to take care of this matter" and was absent for approximately ten minutes. Soon after he returned, ATC gave push back and engine start clearance and the intended reprogramming of the FMGS for an intersection take-off did not occur - although the First Officer subsequently stated that he had assumed that it had been done. It was noted that the arrival of the aircraft into Porto had been 13 minutes behind schedule and that the missing passenger situation had had the effect of increasing the departure delay slightly to 21 minutes. 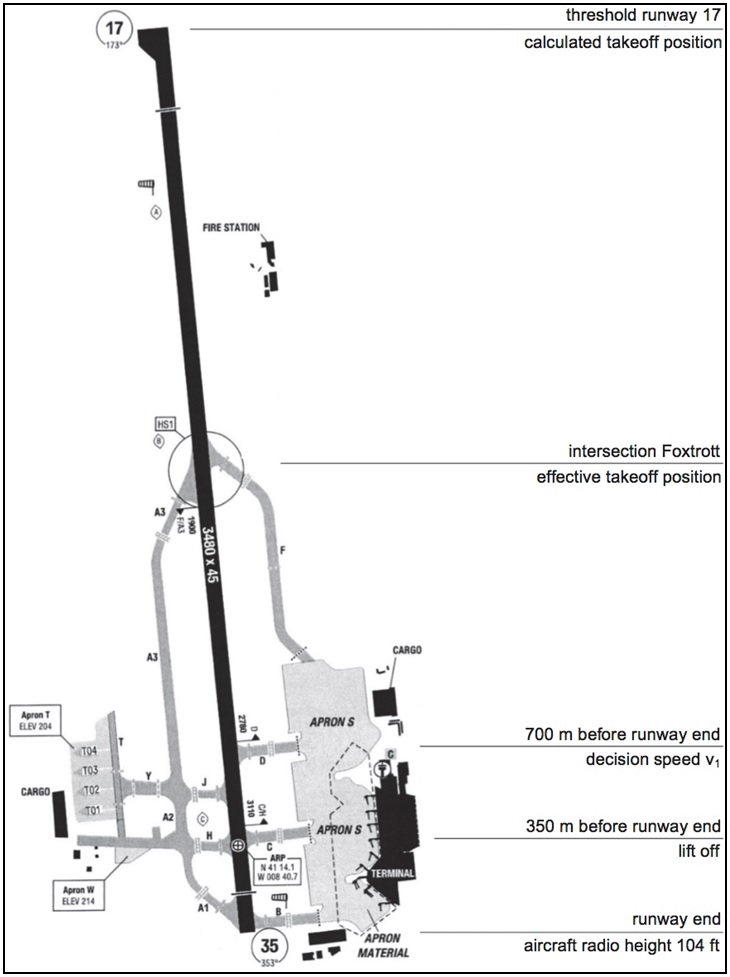 Whilst taxiing out, the flight crew requested take-off from intersection 'F'. ATC then issued clearance to the aircraft taxiing in front of them on taxiway 'F' to enter the runway and backtrack for a full-length take-off. This was followed by ATC asking if the flight crew "were prepared for an immediate take-off" from intersection 'F' ahead of the backtracking aircraft and when this was accepted, take-off clearance was granted immediately.

During a short discussion between the two pilots about the lack of runway which occurred after take-off, the reason for it "still remained unnoticed" and it was not until "the end of his flight duty" that the Captain "became aware of a possible error" and informed both his First Officer and the Belair Flight Safety Officer of his conclusion that "the take-off in Porto had been performed with insufficient engine power".

The Investigation noted that although this reduced engine thrust had been sufficient for a normal take-off "according to the manufacturer's official performance calculations", it had not met the requirement to be able to stop the aircraft on the remaining available runway length in case of a rejected take-off up to V1 speed or to be able to continue the take-off in the event of an engine failure after V1.

In order to establish the context for the crew error at the heart of the event, the Investigation carried out an in-depth review of the circumstances in which it had occurred. Crew fatigue was discounted as a factor and attention was focused on crew actions and relevant Standard Operating Procedures (SOPs) and their supporting documentation.

It was considered that the arrival of the handling agent with their 'one passenger down news' for the Captain had amounted to a distraction and concluded that "the decision to interrupt his work and leave the flight deck at this stage was not appropriate to the situation and facilitated the occurrence of the […] serious incident".

It was noted that the 'Before Pushback or Start’ procedure "stipulates that the final take-off data is first entered by the commander" but that the other pilot must then check these entries. However, on the day, "neither the data entry nor the check were performed in accordance with this provision" and so it was "not possible by the flight crew to discover that the take-off data were incorrectly programmed". It was also noted that the last action in this procedure is the Before Start Checklist, "which includes both pilots cross-checking the take-off data again" but that "even using this Checklist, (neither pilot noticed) that the programmed take-off data did not correspond to the calculated take-off data on the commander's EFB”.

It was considered that a number of factors may have contributed to the incomplete execution of the 'Before Pushback or Start' procedure as follows:

It was found that whilst the elements of procedure came from a range of original sources and were suitably cross referenced, they were not presented in a user-friendly way. Since a flight crew will use the relevant QRH Pre Start Checklist to prepare for their flight, the fact that key checks were not revisited after the decision to request an intersection take-off was significant. The incomplete execution of the steps required by the 'Before Pushback or Start' process remained undetected because subsequent Checklists only resulted in a confirmation that (some) take-off data had been programmed in the FMGS and not what that data was. It was also considered that as the Operator allowed the entering and checking of take-off data to be "subject to task sharing between the PF and the PM”, the process followed "therefore varied from flight to flight".

It was considered that although the taxi procedure "includes the steps to be taken in the event that the take-off data or the intended take-off runway is changed", since the First Officer "believed that the intersection take-off data had already been programmed", the stated qualification for these steps was "if required" which did not trigger any such action. It was especially noticed that since the taxi procedure is required to be completed by the PM alone in silence, the Captain had no influence on the response to 'if required', whereas had it been a challenge and response or other verbalised procedure, the Captain might have been reminded of the status of the FMGS data. A similar charge of ineffectiveness was also considered to apply to the 'Before Take-Off Procedure' which required only that the pilots check whether the aircraft is on the intended runway since "there is no check stipulated to ensure the correct intersection or the available runway length". Had this been included, it "could have served as a reminder of the delayed programming of the correct take-off data".

It was concluded that "the stipulation that the take-off data check and take-off briefing check should be performed in silence while taxiing is an inappropriately narrow interpretation of the sterile cockpit procedure". A "closed loop" procedure involving both pilots which allows an incorrect assumption by one pilot to be identified and corrected by the other, is impossible in silence and it also "remains unclear whether the check has taken place or has been forgotten".

It was concluded that the Cause of the Serious Incident was "the fact that the aircraft did not reach the necessary flight performance on take-off, because the flight crew performed the take-off from a runway intersection with an engine power which had been calculated for the entire length of the runway”.

Safety Action taken by the Aircraft Operator since the occurrence of the investigated event were noted to have included the following:

The Final Report] of the Investigation was approved by the Swiss Transportation Safety Investigation Board on 13 August 2015 and published on 21 August 2015. No Safety Recommendations were made.