On 12 February 2019, an Airbus A320 under the command of a Captain reportedly undergoing line training supervised by a Training Captain occupying the supernumerary crew seat was slow to follow ATC instructions after breaking off from an unstabilised approach at London Stansted caused by the First Officer’s mismanagement of the approach and lost separation at night as it crossed approximately 600 feet above a Saab 340B climbing after takeoff. The Investigation found that flight crew workload had been exacerbated after the Captain under supervision unnecessarily delayed taking over control and had then not done so in the prescribed way.

On 12 February 2019, an Airbus A320 (OE-IHD) being operated by Laudamotion on a scheduled international passenger flight from Vienna to London Stansted as LDM9421 and which had just commenced a pilot-initiated go around from runway 23 at destination lost separation in night VMC against a Saab 340B (G-LGNK), being operated by Loganair as LOG65KL which was on a domestic passenger flight from London Stansted to Dundee, as it crossed above this aircraft. ATC took the Saab 340, which had just taken off from the same runway and was climbing on runway heading, off the SID being flown to ensure separation but a TCAS RA was briefly activated and followed as the A320 passed over the Saab with approximately 600 feet vertical separation.

An Investigation was carried out by the UK AAIB based on ATC radar and transponder data from both aircraft and information provided by both flight crews. It was noted that the 41 year-old A320 Captain who had been PM for the flight involved until obliged to take over, had a total of 13,731 flying hours of which just 98 hours were on type. No information was provided on the experience of the A320 First Officer who was acting as PF until the Captain was obliged to take over control or on the experience of the Training Captain who was occupying the supernumerary crew seat. It was also not clarified how the designated aircraft commander was able to be so designated whilst undergoing line training or how it was possible for the Training Captain “supervising” him not to have been occupying the right hand pilot seat. It was noted that the 42 year-old Saab 340 Captain had a total of 5,311 flying hours of which 4,574 hours were on type.

It was established that as the A320 was passing approximately FL 140, ATC gave the flight a short-cut and a speed reduction to 250 knots which meant that it was now above the ideal descent profile for the in-use runway 22. The First Officer reported having considered that the approach was “still acceptable” and when, at approximately FL 070, the flight was re-cleared to 2,000 feet QNH, the altitude of the ILS final approach fix (FAF), it was decided to extend the speed brakes to increase the rate of descent. After further reducing the required speed to 220 knots and then to 200 knots, an increase in track miles was offered by ATC but declined by the First Officer. The Captain then reminded him that the aircraft was still above profile and said that he wanted to extend the landing gear to assist. Once this had been done, the aircraft began returning to the final approach vertical profile, although as the planned ILS GS intercept point - the FAF - neared, a considerable ‘fly down’ indication was still present and prior to GS capture, the aircraft began to level off at the selected altitude of 2000 feet.

The Captain responded by directing the First Officer to select V/S mode so as to enable ILS GS capture to occur but instead the First Officer inadvertently selected a climb mode instead. Although he then wanted to correct his error and try again to descend to the ILS GS, the Captain, “recognising there was no prospect of a stable approach” ordered a go-around.

The First Officer “set TOGA for the flight director and autothrottle whilst also disconnecting the AP” whilst the Captain set the 3000 feet QNH go around stop altitude in the the flight control unit (FCU). Almost immediately, altitude capture mode became active and as the aircraft levelled off, “there was some confusion between the pilots over speed and flap selections” which resulted in the First Officer reducing the thrust to idle. In response, the Captain instructed the First Officer to “set thrust and Flap 1” but then, still not content with the control of the aircraft, the Captain took over as PF without pressing the priority button on his sidestick. As he did so, ATC re-cleared the flight to 4,000 feet and instructed it to fly a heading of 135°M, the latter being followed shortly afterwards by an instruction to continue the left turn onto 090°M.

The flight director was set for the standard missed approach procedure and so the Captain did not engage the AP and instructed the First Officer to set the cleared heading of 090°M. However, he then “made a slight turn to the right” before quickly reversing this to commence the instructed left turn. On seeing the initial response, the First Officer pressed the priority button on his sidestick which generated an aural warning of “priority right” upon which, the Captain re-iterated that he was in control of the aircraft and pressed his own priority button. He then continued the left turn and climbed as cleared to 4000 feet QNH and a further approach to a landing was subsequently completed. The crew subsequently stated that proximity of the Saab 340 had generated a TCAS TA and that they had “believed the aircraft were approximately 900 feet apart”.

The departing Saab 340, with the Captain as PF, was flying a UTAVA 1R SID. This involved climbing on runway heading to 3.1 nm on the ILS DME and then making a right turn onto the BKY VOR 170°R continuing the climb to 4000 feet QNH. As the flight passed 1000 feet with the AP engaged, ATC advised that an aircraft on approach had initiated a go-around. After initially telling the crew to continue on the SID, they then gave a radar heading of 290°. As this was commenced, ATC then told them to stop their climb at 3000 feet. As the aircraft passed approximately 2,500 feet, a TCAS TA was displayed followed a few seconds later by a TCAS RA ‘LEVEL OFF’ as the aircraft passed approximately 2,700 feet. The Captain disconnected the AP and began to level the aircraft but almost immediately a TCAS “clear of conflict” message was annunciated and the climb to 3000 feet was completed and the AP re-engaged. No TCAS RA call was made to ATC because of the First Officer’s “high workload” at the time of the event and only after the flight to destination had been completed was the event reported to Stansted ATC.

Radar and ATC transponder data were analysed and it was determined that that the two aircraft had passed 87 metres apart laterally and 600 feet vertically as illustrated below where the annotated altitudes are shown based on 1013. 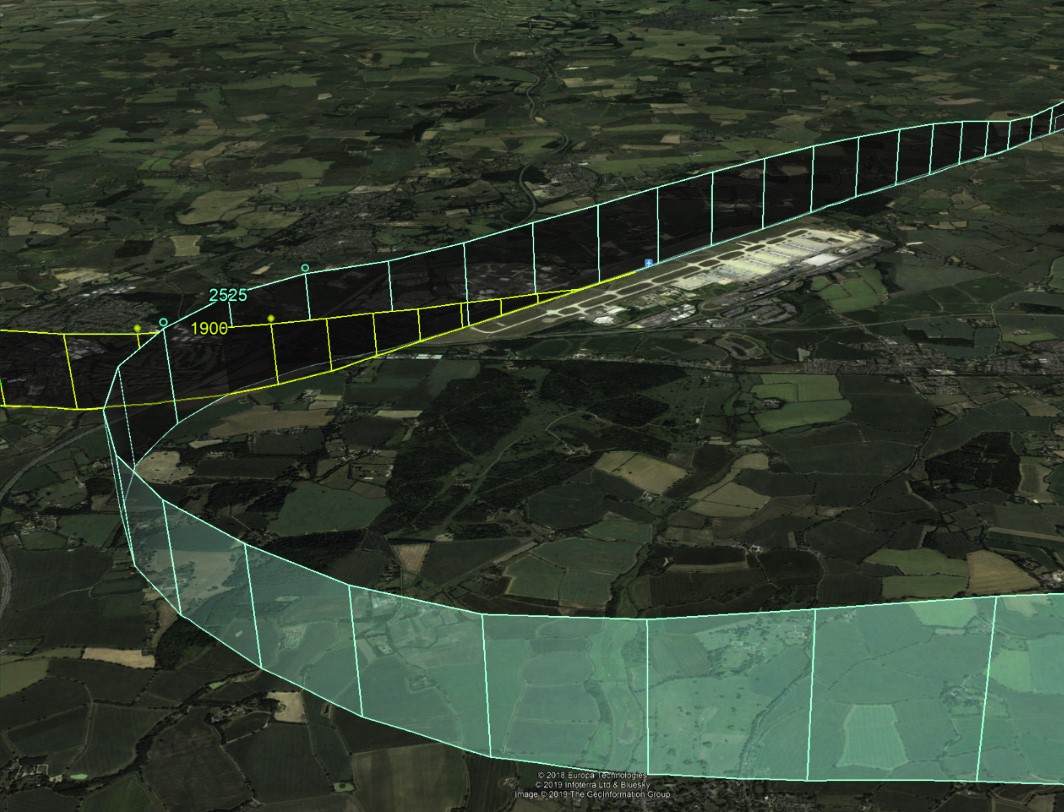 A 3D reconstruction of the flight paths of the A320 (blue) and the SF34 (yellow). [Reproduced from the Official Report]

In its analysis of the event, the Investigation identified the First Officer’s non-standard disconnection of the AP as “inadvertent” and surmised that the delayed response of the A320 crew to ATC instructions following their notification that a go around was being flown was attributable in part to their “high workload following the initiation of the go around and the change of control (which) led their focus to be inside the aircraft for a significant period”. It was also considered that the fact that “the commander was in a relatively unfamiliar role and being assessed on his performance (meant that) it is likely that he did not wish to be too overbearing on the First Officer and so allowed the perceived excess energy situation to persist longer than he would in normal circumstances”.

The Conclusion of the Investigation was formally documented as follows:

The go-around and the very high resultant workload, followed by a change of PF, led to a situation where the ability of one of the A320 crew to react to ATC instructions was reduced. Due to the delay in the response by the A320 crew there was a short term loss of separation between the aircraft. The Saab 340 crew received a TCAS RA which prevented a further degradation of separation.

The Final Report of the Investigation was published on 14 November 2019. No Safety Recommendations were made.