On 18 September 2018, an Airbus A320 crewed by a Training Captain and a trainee Second Officer departing Sharjah was cleared for an intersection takeoff on runway 30 but turned onto the 12 direction and commenced takeoff with less than 1000 metres of runway ahead. On eventually recognising the error the Training Captain took control, set maximum thrust and the aircraft became airborne beyond the end of the runway and completed its international flight. The Investigation attributed the event to the pilots’ total absence of situational awareness noting that after issuing takeoff clearance, the controller did not monitor the aircraft.

On 18 September 2018, an Airbus A320 (A6-ANV) being operated by Air Arabia on an international passenger flight from Sharjah to Salalah as ABY111 which was being used for line training turned the wrong way when entering the runway in normal day visibility and began takeoff with insufficient runway length available. The lightly loaded aircraft did not become airborne until it had departed the end of the runway and entered the RESA after which the landing gear struck an approach light damaging the tyre involved. It then continued without further event to its intended destination and continued to complete the return flight with the damaged tyre remaining inflated and the damage reportedly not visible with the wheel concerned positioned during the turnround.

An Investigation was carried out by the UAE GCAA Air Accident Investigation Sector (AAIS). Data from both the FDR and the CVR were downloaded but relevant data from the CVR had been overwritten.

It was found that the 51 year-old Training Captain in command had a total of 22,184 hours flying experience including 15,536 hours on type and had been acting as PM for the investigated departure. He was accompanied by a 34 year-old Second Officer under training who had a total of just 159 hours flying experience, all of which had been gained on type as she progressed through the fifth and final stage of the operator’s MPL-based ab-initio pilot training programme. At this stage of her training, company procedures did not require a third pilot to occupy the flight deck supernumerary crew seat during flights. The event under investigation occurred on the fourth day of line/route training conducted with the same crew pairing.

It was established that pre fight preparation was unhurried and apparently thorough and included the Second Officer being briefed that she would be PF and that the taxi out would be on a single engine with the second started nearer the runway. The brief also included the planned intersection and rolling takeoff “as part of her training subjects”.

The speeds used for a 57 tonne takeoff using reduced thrust were V1, 122 KIAS, VR, 127 KIAS and V2, 129 KIAS. All relevant flight performance data, including the flap/slat setting and the runway in use - runway 30 - were correctly entered in the FMS. In line with the aircraft operators procedures the ‘V’ speeds used were provided on the OFP rather than calculated by the crew. The OFP stated that from the intersection to be used, B14, the TODA would be 3,050 metres. The ASDA in the event of a rejected take off was not provided which was approximately 1,000 metres shorter that the full length of the runway.

During pushback, the left engine was started by the Captain. Taxi clearance was then given as taxi for runway 30 at B14 via taxiways A & A14 and contact TWR on reaching the holding point. After about a minute of taxi time, the right engine was started as the aircraft approached the B14 intersection. With the park brake set, the Before Takeoff Checklist (see the illustration below) was completed ‘down to the line’. 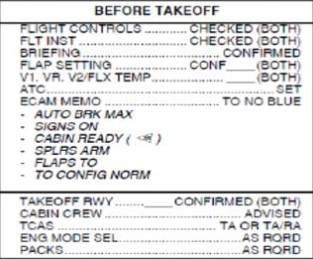 The Before Takeoff Checklist. [Reproduced from the Official Report]

The Captain called TWR and advised ready for departure and on receiving takeoff clearance read it back “Clear for takeoff, Bravo fourteen, Runway three zero Arabia triple one. Thank you”. The Second Officer then requested completion of the paused checklist which includes confirmation of the runway by both pilots.

As this was being read by the Captain, the parking brake was released and after a few seconds rolling forward towards the runway at idle thrust, the Second Officer then began to increase both engines' thrust above idle power and commenced a right turn towards runway 12, the reciprocal direction of the runway. The Captain stated that at this time “his sight was directed inside the flight deck completing the remaining items on the Before Takeoff Checklist”.

The runway 12/30 access from B14 showing the taxi lines and the runway 30 TDZ markings. [Reproduced from the Official Report]

Without any intervention from the Captain, the Second Officer then advanced both thrust levers to the FLX/MCT position. After checking thrust was set, she reported noticing that the Flight Mode Annunciator (FMA) was showing ‘NAV’ instead of ‘RWY’ and called this out. Soon after this call, the Captain looked up and realised that the aircraft was accelerating in the wrong direction but “decided to continue the takeoff believing that the remaining take-off runway available was insufficient to reject the takeoff” and advanced the thrust levers to TOGA. FDR data indicated that this action occurred at 57 KCAS and 63 knots ground speed with 730 metres of runway remaining with TOGA thrust reached within 2 seconds. The Second Officer continued to apply a nose down sidestick input of 6°.

After a further six seconds, TWR saw what was happening and called the flight with no response. The Captain then moved the slat/flap to the ‘flap 2’ position and initiated rotation at VR-8 by making a nose up sidestick input recorded as initially 8.3° which then increased to 9.2°. FDR data showed that although the Captain had clearly taken control, he had not taken sidestick priority so that the Second Officer’s continuing nose down sidestick input, albeit reduced to 3° was being summed with the Captain’s opposing input. The aircraft pitch-up angle reached 9.1° and the aircraft lifted off at 132 KCAS - equivalent to 140 knots ground speed given the tailwind takeoff. The aircraft had continued beyond the end of the runway into the RESA by about 30 metres. The illustration below shows the takeoff diagrammatically.

An annotated reconstruction of the aircraft ground track. [Reproduced from the Official Report]

Although not known to the crew at the time, the No. 3 main gear wheel had struck and damaged one of the runway approach lights. A further call from TWR as the aircraft climbed through 260 feet agl received a response from the Captain who subsequently passed control back to the Second Officer and the intended flight was completed.

In his interview, the Captain stated that after arriving at Salalah, he was contacted by company Operations Control and a discussion took place about the return sector. As he stated that he was unaware of any aircraft damage, he decided to operate the flight as planned and subsequently did so as PF.

It was concluded that in all probability, neither of the calls which the Captain was required to make when taking control - “I have control” - and when deciding to continue the takeoff - “Go” - or any equivalent verbal communication had occurred.

One Contributing Factor was also identified as “the air traffic controller did not monitor the aircraft movement after takeoff clearance was given”.

A total of 6 Safety Recommendations were made as a result of the Investigation as follows:

The Final Report of the Investigation was issued on 10 January 2022.