On 2 December 2016, the crew of an Airbus A320 passing 100 knots on takeoff at Calgary saw another aircraft crossing an intersection ahead but continued because they considered that, as the other aircraft was already more than half way across, it would be clear before they reached that point. The Investigation found that the GND Controller had cleared the other aircraft to cross after forgetting that the runway was active and under TWR control. It was concluded that the response of the ANSP SMS process to a history of identical controller errors and related reports had been inadequate.

On 2 December 2016, an Airbus A320 (C-FDQV) being operated by Air Canada and departing Calgary on a scheduled passenger flight to Vancouver as ACA 221 was accelerating through 100 knots on runway 29 in “twilight” but otherwise excellent day visibility when its crew saw an out of service Swearingen SA226-TC (C-FGEW) being operated by Sunwest Aviation crossing the runway ahead. Because this aircraft was already half way across, the A320 crew elected to continue their takeoff which was accomplished without further incident.

An Investigation was carried out by the Canadian Transportation Safety Board (TSB). Sufficient relevant recorded data and testimony was available to enable a detailed reconstruction of the events leading up to the incursion. It was noted that the benign prevailing weather conditions had played no part in the incursion. It was noted that the GND controller involved had 15 years’ experience of which 11 were at Calgary and had been on duty for 4 hours at the time of the occurrence.

It was found that runway 11/29 had been transferred from GND to TWR control 10 minutes prior to the conflict after a change in forecast wind velocity had led, some 40 minutes earlier, to the decision to change the active runways from 17L and 17R to 29. Soon after the changeover of runway 11/29 to TWR control, the A320 was cleared by GND to taxi to the 29 holding point - position [5] on the illustration below. Five minutes later, the same GND controller cleared the A226 to taxi on ‘W’ and ‘A’ to hold short of runway 29 – shaded position [6] on the illustration. The A320 was instructed by GND to change to TWR and, on checking in, was cleared to continue taxiing onto the runway and to take off. However, the controller did not then update the computer display system. Almost a minute later, the GND controller cleared a just-landed CRJ900 to the main apron and immediately updated the computer display system. He then proceeded to update the computer display system for the SA226 “to reflect the clearance instruction to hold short of Runway 29” and immediately informed the same aircraft that it was cleared to cross Runway 29. He then further updated the computer display system to reflect the revised clearance limit of the intersection of taxiways ‘A’ and ‘J’ to await the passing of the CRJ 900 on taxiway ‘J’. 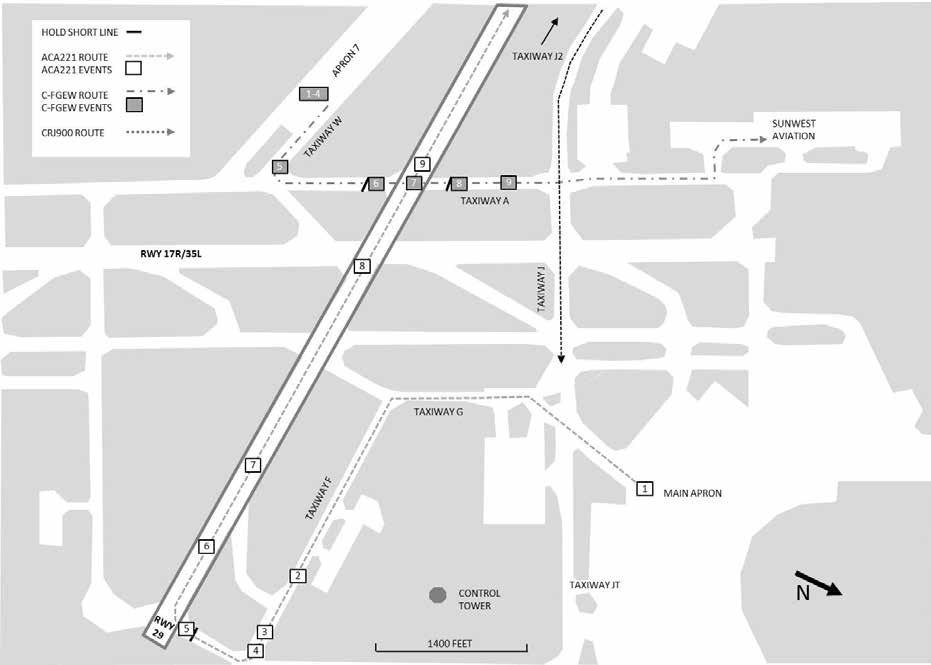 Part of the Calgary Airport Taxi layout annotated with the tracks of the three relevant aircraft. [Reproduced from the Official Report]

Soon afterwards, the A320 began its takeoff and soon after that, the SA226 crossed the runway 29 holding point, both aircraft being in compliance with their respective clearances. Twelve seconds later, the SA226 was crossing the centreline of runway 29 - shaded position [7] on the illustration and the A320 crew first saw it ahead as they accelerated through 100 KIAS. They decided to continue on the basis that the conflicting aircraft was likely to clear before they reached it. Three seconds after the SA226 crossed the northern hold short line - shaded position [8] on the illustration, the A320, by now just airborne, crossed over the taxiway ‘A’ centreline at a ground speed of approximately 136 knots.

Only the ATC aspects of the event were examined. The late sighting of the crossing aircraft by the A320 crew and their decision to continue with the takeoff after sighting the obstruction ahead were not investigated.

Significant aspects of the provision of ATC at Calgary were noted as including:

The implications of these observations for controller training in infrequently used procedural skills such as use of 29 as an active runway were noted as best addressed by frequent reinforcement of such skills to enhance retention and proficiency.

In terms of the wider Runway Incursion risk, the Investigation noted that whilst the annual total of all recorded Canadian runway incursions during the six year period 2011-2016 appeared to have peaked, 21 of the 48 of those incursions categorised as having a serious outcome (defined as ICAO Class ‘A’) had occurred in the single year 2016. Runway Incursions remain on the TSB Watchlist as they have been since 2010.

The one formally-stated Finding as to Risk was as follows:

Safety Action taken as a result of the occurrence by ANSP NAV CANADA was noted as having included the following:

The Final Report of the Investigation was authorised for release on 17 January 2018 and it was officially released on 5 February 2018. No Safety Recommendations were made.