On 30 September 2017, an Airbus A320 touched down late after an ILS approach to runway 32 at Sylt with a significant tailwind component being reported and failed to stop before overrunning the end of the runway and subsequently stopped on grass 80 metres beyond it. The Investigation noted that the calculated required landing distance was close to the landing distance available, the actual approach speed was 20 knots above the calculated one and that the aircraft had floated in the flare above a wet runway. It was concluded that the runway excursion was attributable to non-performance of a go-around.

On 30 September 2017, an Airbus A320 (D-ABHO) being operated by Air Berlin on a scheduled domestic passenger flight from Dusseldorf to Sylt as AB6880 failed to stop prior to the end of the 2,102 metre-long runway 32 at destination after touching down in normal day visibility following a Cat 1 ILS approach. The aircraft was undamaged but one runway threshold light was destroyed. 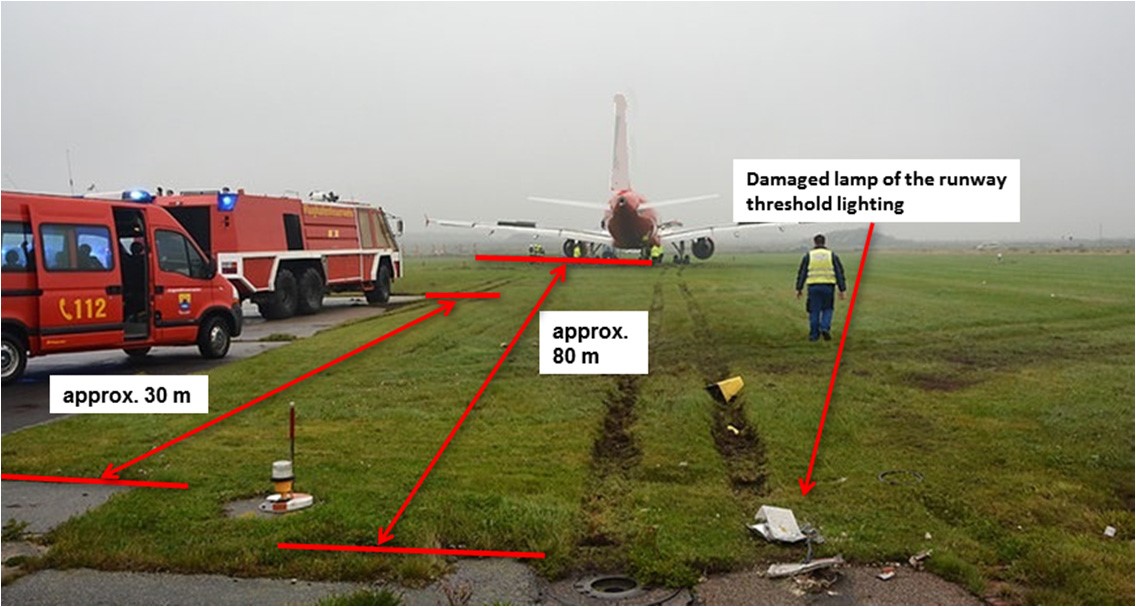 The aircraft in its finally stopped position beyond the runway. [Reproduced from the Official Report]

An Investigation was carried out by the German Federal Bureau of Accident Investigation (BFU). The SSFDR and SSCVR were both removed from the aircraft and their relevant data was successfully downloaded. The Brake Steering Control Unit (BSCU) and the Centralised Fault Display System (CFDS) were also removed and data from the latter analysed.

The flight was the first of the day for both pilots. The TAF for Sylt indicated that the cloudbase was such that it would be necessary to make an ILS approach for which only runway 32 was equipped and this request was made and approved. During the subsequent approach briefing, the approach and go-around procedures and the anticipated tail wind component were discussed and a ‘medium’ auto brake setting was selected.

Clearance for the approach was given and flap 1 was selected, followed after about 20 seconds by flap 2. By around 11 nm from touchdown, the aircraft was fully established on the runway 32 ILS and was transferred to TWR. Passing about 2,500 feet QNH, the AP and A/THR were disconnected and soon afterwards, landing clearance was given with the spot wind 140°/11 knots and the advice that the runway was “wet with water patches”. This prompted a discussion between the pilots as to whether to change the previously selected auto brake “medium” setting but it was agreed to leave it where it was. Half a minute later, the landing gear was selected down and after a further half minute, flap 3 was selected.

The Captain then instructed the First Officer to add 5 knots to the previously set VAPP on the Mode Control Unit (MDCU) and then requested full flap selection and called for the landing checklist with the aircraft about 4½ nm from touchdown. As the aircraft passed 400 feet agl with sufficient visual reference to complete a landing not yet acquired, the Captain said "land". The TWR controller then passed the spot wind of 140°/10 knots and just before the applicable DA of 230 feet QNH was reached, the Captain called runway in sight and said “continue”. The runway threshold was crossed at approximately 50 feet agl with a 163 knot ground speed. The aircraft began to float in the flare and six seconds after crossing the threshold, the Captain was recorded as saying to himself in German “come on, go down” followed one second later by the automatic callout “five“ and then the same again two seconds later.

Touchdown followed approximately 930 metres past the threshold of the 2,120 metre-long runway 12 seconds after crossing it. This was about 4 seconds longer than the average time to touchdown during the 20 previous landings recorded on the DFDR. Autobrake was deactivated about 5 seconds after touchdown by the Captain beginning manual braking with maximum possible brake pedal movement quickly reached but actual brake pressure then intermittently reduced by the anti skid system as patches of standing water were encountered. Twenty three seconds after touchdown, having remained on the runway centreline, the aircraft crossed the end of the runway with a ground speed of approximately 44 knots before eventually stopping after a further 80 metres. The illustration below is annotated accordingly.

The Captain then made a PA call of “attention crew on station” and repeated it. Once the airport RFFS had reached the aircraft, they made contact with the flight crew and both passengers and crew subsequently disembarked via air stairs brought to the aircraft. The Captain subsequently stated to the Investigation that whilst he thought he had remained in the flare too long and had been aware that touchdown had consequently been “somewhat late”, he had “not seen the necessity for a go-around procedure”. The First Officer stated that he “had had the impression that a go-around was imminent, but he had not intervened”. He also stated that prior to touchdown the approach lighting “could be seen very well”. It was noted that the landing mass was just under 56 tonnes compared to the MLM of 64.5 tonnes.

At the time of the overrun, the prevailing surface visibility was 1,200 metres and the runway 32 RVR was in excess of 2000 metres in “mist and rain” below a cloudbase being reported as 200 feet aal. It was noted that whilst an LNAV non precision approach procedure was available for runway 14, the associated obstacle clearance altitude (OCA) for Cat ‘C’ aircraft such as the A320 was 410 feet QNH, making a successful approach using it unlikely.

In respect of the wet runway surface, it was noted that in respect of the achieved braking action against the RCAM categories, it had been between ‘Medium’ and ‘Good to Medium’ (see the second illustration below). The pilots used the RCAM method during their landing distance calculation and classified the runway braking action as ‘Good to Medium’ which showed a distance of 130 metres in excess of the required landing distance and Airbus confirmed that the calculated distance was “close to the actual values”. 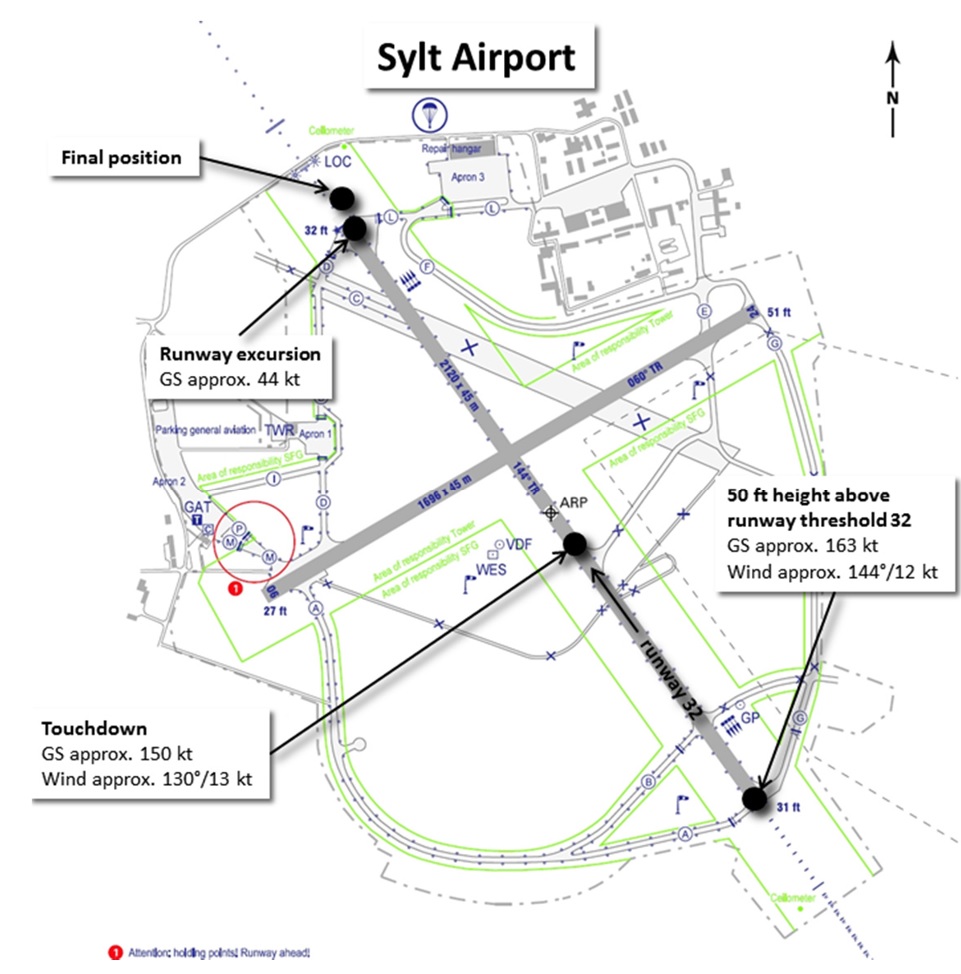 The Sylt Aerodrome Diagram annotated with data derived from analysis of FDR data. [Reproduced from the Official Report]

The Investigation made no findings which would have impaired a safe landing under the prevailing conditions. There was some conflict between the statements given by the airport operator than the runway surface had only been damp and other evidence. On balance, it was concluded that the runway surface had been “contaminated with standing water”. The Investigation was unable to assess the amount of rubber contamination on the runway and no documentation to show when the last rubber removal procedure had been performed was available. It was considered that “contamination of the runway with water in not ascertainable quantity in combination with an unmeasured but existing amount of rubber deposit” together constituted a contributory factor in the reduced braking action recorded and the consequent increase in the stopping distance required.

In terms of the approach speed flown, it was found that the runway threshold had been crossed at approximately 151KCAS compared to the EFB VAPP calculation of 131 KIAS but it was not possible to determine what VAPP had been calculated by the MDCU or establish why the Captain had asked for a 5 knot addition to the VAPP originally set on the MDCU. It was, however, certain that whilst this increase would have added to the landing distance required, the original calculation had not been updated. 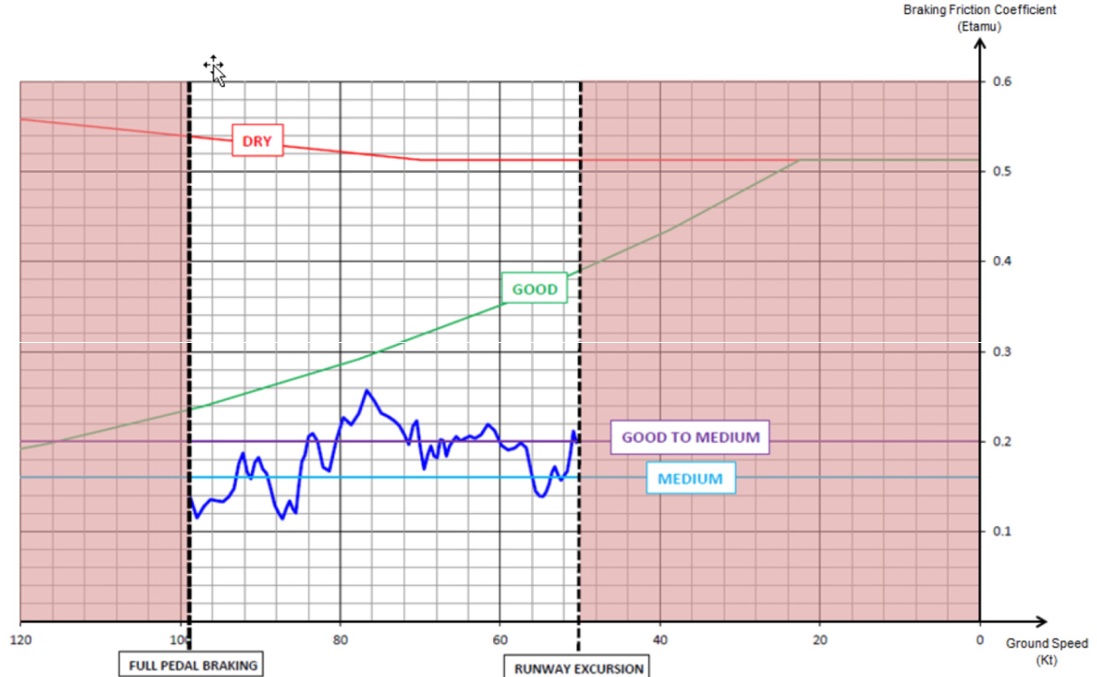 The braking friction coefficient relative to the code for landing distance calculation. [Reproduced from the Official Report]

Overall, the Investigation considered that based on the calculation of the landing distance required - 1,990 metres - “both pilots must have been aware that the safety margin was extremely small and about 130 metres long”. It was clear that especially on a short runway, in this case one which was also “covered with water”, a positive touchdown without a prior long flare was necessary. It was further considered that the Captain “should have considered this in a risk assessment and included it in his approach briefing".

The importance of effective CRM as a safety mechanism was noted with its fundamental point being that “flight crew members monitor and observe each other and share which actions deviate from the standard procedure and give correction instructions”. Meaningful teamwork on the flight deck also means that the other person is included in the decision making process in which case, the First Officer would have felt able to call for a go-around in accordance with the operator’s SOP. It was concluded that “given the circumstances, one of the pilots should have made the go-around call” and that had this happened at the appropriate time, the runway excursion would have been prevented.

The Cause of the Runway Excursion was formally documented as “the non-performance of the go-around procedure”.

A Contributory Factor was also identified as “the addition of a 5 knot increase to the originally calculated VAPP and the consequent increase in landing distance required”.

The Final Report of the Investigation was published on 15 October 2020 and released the following month. No Safety Recommendations were made in respect of “organisation and procedures” related to the event since “at the end of 2017 the operator declared bankruptcy (and) there is no legal successor”.