On 13 August 2016, an Airbus A320 departed the side of the runway at low speed during takeoff from Tehran Mehrabad and became immobilised in soft ground. The Investigation found that the Captain had not ensured that both engines were simultaneously stabilised before completing the setting of takeoff thrust and that his subsequent response to the resulting directional control difficulties had been inappropriate and decision to reject the takeoff too late to prevent the excursion. Poor CRM on the flight deck was identified as including but not limited to the First Officer’s early call to reject the takeoff being ignored.

On 13 August 2016, an Airbus A320 (EP-TTA) being operated by Atrak Airlines on a domestic passenger flight from Tehran Mehrabad to Hasheminejad as ATR 1943 failed to proceed aligned with the centreline of the 4,030 metre-long, 60 metre-wide runway 29 as it accelerated for takeoff and had departed the left side of the runway at low speed in night VMC and become immobilised in soft ground. The aircraft sustained only relatively minor damage despite an application of forward thrust after the aircraft had come to a stop which failed to move it. The 154 passengers were disembarked from the aircraft and returned to the terminal.

The aircraft where it stopped following the excursion. [Reproduced from the Official Report]

An Investigation was carried out by the Aircraft Accident Investigation Board (AAIB) of the Iran Civil Aviation Organisation (CAO). Data from both the SSFDR and the CVR were successfully downloaded and used to assist the Investigation. The prevailing weather conditions were benign with an almost negligible tailwind component and had no effect on the event.

It was established that the takeoff had been commenced from a standing start and that the Captain had begun setting the thrust for flex thrust takeoff whilst the First Officer was still reading back the takeoff clearance. To achieve this, he moved both thrust levers symmetrically and from the IDLE detent directly towards the FLX/MCT position without pausing to achieve thrust stabilisation at 1.05 EPR before continuing to complete the thrust lever movement to the FLX/MCT detent. It was noted that the 1.05 EPR Thrust Lever Angle (TLA) is approximately 9.5° to 10° whereas the FLX/MCT detent is at 33°. FDR data showed that, although four seconds after commencement of the initial forward movement of the thrust levers, there had been a very brief (2-3 second) pause, thrust did not stabilise during this pause and the initial difference between the thrust of the two engines after increase in thrust at comparable rates had produced a left engine EPR of 1.03 and a right engine EPR at 1.24.

As the aircraft began to veer slightly to the left as a result of this thrust asymmetry (see the illustration below), a significant right rudder pedal input was recorded. At the prevailing low speed, this would not have had any corrective directional control via the rudder deflection but would, irrespective of any input to the nosewheel steering input via the tiller (not recorded on the SSFDR), have immediately led to a change in the nose wheel steering alignment to the right which corresponded to the time when “noise and vibration” was reported by the crew to have begun. It was considered that this would have been a consequence of the nosewheels skidding across the runway surface when aligned contrary to the direction of movement of the aircraft. 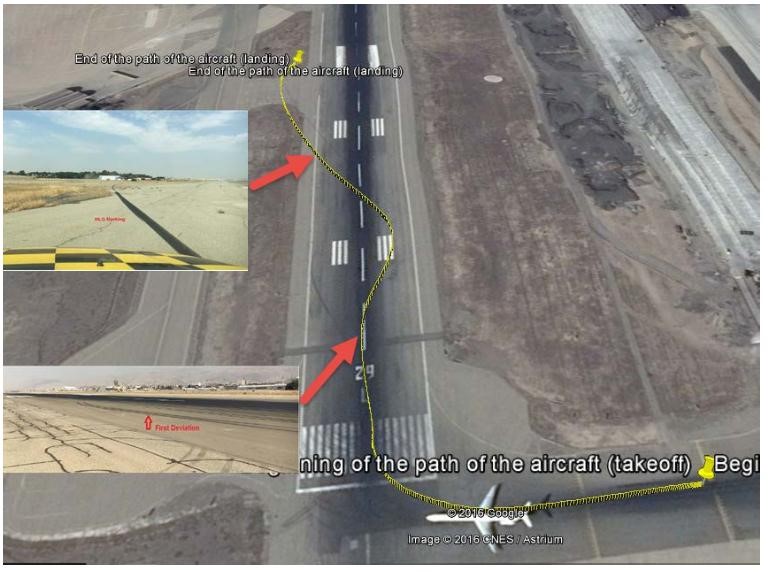 The reconstructed ground track of the aircraft during the attempted takeoff. [Reproduced from the Official Report]

As the groundspeed reached 15 knots, both TLAs were reduced slightly as was the right rudder input and the aircraft began to turn back towards the right and through the runway centreline. As the groundspeed passed 22 knots, the rudder pedal input was changed to a significant left turn and passing 26 knots, the right engine TLA was increased to over 40° (almost reaching the TOGA detent) whilst the left engine TLA was simultaneously returned to the IDLE detent. At this speed, the aircraft reached its closest to the right hand edge of the runway and a turn back to the left then commenced and both foot brakes were applied. The right engine TLA was then reduced to IDLE. At almost the same time as the aircraft departed the left side of the runway, the maximum achieved groundspeed of 31 knots was reached and both thrust levers were selected to ‘MAX REV’. The aircraft eventually came to a stop 48 seconds after the thrust levers had been initially advanced above IDLE.

FDR data showed that, in an apparent attempt to move the aircraft back towards the paved surface, two separate movements of the left engine thrust lever had then been made, first to 14° and then to 20° with the corresponding EPR reaching 1.16 but the aircraft did not move. The subsequent completion of AMM actions to check the continued integrity of the nose landing gear and steering system did not identify any abnormalities which might have been caused by this action but other damage to the aircraft did include minor damage to the fan blades of both engines caused by ingestion of FOD as well as damage to a landing light.

In seeking to relate the reconstructed aircraft ground track with crew actions, Airbus facilitated engineering simulations which demonstrated that this ground track could not have been achieved by the recorded sequence of rudder and thrust inputs. The only way that it could have been achieved was by concurrent nose wheel steering tiller commands, which allow up to 7.5° of nose wheel movement either side of neutral at groundspeeds of up to 20 knots rather than the absolute maximum of 6° achievable by movement of the rudder pedals.

Once the directional control difficulty had arisen, the only valid crew response was to reject the takeoff and it was noted from the CVR data that the Captain had initially ignored a call to abandon the takeoff from the relatively more type-experienced First Officer. The eventual use of reverse thrust and braking action was then so late as to make the runway excursion inevitable. It was also noted that the First Officer’s role as PM included monitoring the setting of takeoff thrust which the reading back of the takeoff clearance whilst this was happening would have compromised.

The Investigation determined that the Probable Cause of the Accident was "pilot failure to set takeoff power without first achieving initial stabilisation of both engine parameters as required by the aircraft FCOM and also the failure to safely reject the takeoff in a timely manner which resulted in a runway excursion”.

The Final Report of the Investigation was issued on 6 May 2017 and subsequently made available online.