On 25 February 2017, an Airbus A320 left the side of the landing runway at Toronto when, for undetermined reasons, the Captain, as Pilot Flying, set up a drift to the right just before touchdown. This was then followed by a lateral runway excursion into wet grass in rain-reduced visibility which continued for 1,650 metres before the aircraft regained the runway and stopped. The Investigation noted that both the absence of runway centreline lighting and the aircraft operator’s policy of not activating the aircraft rain repellent system or applying the alternative hydrophobic windshield coating may have increased the excursion risk.

On 25 February 2017, an Airbus A320 (C-FDRP) being operated by Air Canada on a scheduled domestic passenger flight from Halifax to Toronto as flight 62 made a night Cat 1 ILS approach in reduced visibility due to rain which resulted in a late touchdown near the edge of the 60 metre-wide 2,770 metre-long runway 15R. The aircraft subsequently departed the runway onto the adjacent grass. It then paralleled the runway for over half its length before regaining it and coming to a stop. After the engines had been shut down and inspection showed that there was damage to the landing gear and engines, passengers were disembarked to buses.

An Investigation was carried out by the Canadian TSB. Relevant data was successfully recovered from the FDR.

It was established that runway 15R was in use as the landing runway at Toronto and that only a Cat 1 ILS approach was available in conditions of reduced visibility in rain. The aircraft being flown was equipped for autoland off a Cat 1 approach but as the reported RVR was almost twice the applicable minimum, the crew, having noted the absence of centreline lighting on the runway concerned, nevertheless decided that the AP would be disengaged once below DA for a manual landing in surface winds that were light and variable.

The PF had the approach lights in sight when the PM called “Minimums” at 200 feet agl and responded with “Landing”. At 100 feet agl, he disengaged the AP. The aircraft crossed the displaced runway threshold at a recorded height of 39 feet agl on the ILS LOC and GS. Then, descending through 26 feet agl, the PF made a brief but large right roll input - approximately 75% of the maximum available sidestick deflection - which produced a 4° right bank and the aircraft began to drift to the right of centreline and then immediately reduced the thrust to idle. At a recorded 8 feet agl, the aircraft was 10 metres to the right of the centreline of the 60 metre wide runway and PM called out that the aircraft was drifting to the right. The PF responded with a left roll command and left rudder but although the wings returned to level, the drift to the right continued due to the aircraft’s momentum. The left main gear touched down on the paved surface some 680 metres past the displaced runway threshold followed almost straight away by a minor bounce of the right main gear during which the outboard wheel was just 6 metres from the edge of the runway.

The aircraft continued drifting to the right following the bounce and when the right main gear touched down again it was off the runway in wet grass. After a further 85 metres during which there was further movement to the right, the nose landing gear also touched down on the grass and struck one of the runway edge lights. The out board left main gear wheel and left engine cowling then each struck two runway edge lights and the outboard left wheel tyre was damaged and deflated. The Captain then selected reverse thrust and both engines began to ingest debris. Once the aircraft had slowed down, he steered it back onto the paved surface and brought it to a stop 1653 metres from the displaced threshold and 938 metres from the end of the runway. The PM advised ATC that the aircraft was stopped on the runway and had undergone a runway excursion and requested ARFF to attend and inspect the aircraft for damage which was deemed sufficient to require no attempt to taxi in and the passengers were disembarked onto buses and taken to the terminal.

Further examination of the engines found denting to the left engine cowling and sufficient internal damage to both engines caused by use of reverse thrust whilst on the grass for both to have to be replaced. A total of 5 runway edge lights, which were located in the grass 1.5m metres beyond the runway edge, were damaged by impact with either the landing gear or the left engine cowling.

The Investigation was unable to determine why, as the aircraft was flared from an on-centreline position, the Captain had made a right roll command input, which initiated the drift to the right. It was noted that although a previous review of lateral excursions by Airbus had found that this type of destabilisation often occurred when the AP was disconnected or as the transition from instrument to visual flight was being made, in the event under investigation, destabilisation occurred much later than both of these and was also closer to the ground. It was also noted that the fact that the aircraft was drifting had to be pointed out to the Captain by the PM First Officer and that the former’s response to the alert, was insufficient to counteract the lateral momentum of the aircraft. 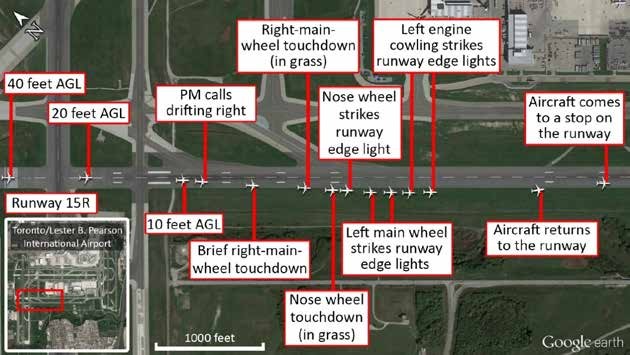 The aircraft ground track in relation to the landing runway. [Reproduced from the Official Report]

More generally, it was noted that the TSB had previously investigated a number of lateral runway excursions during landing in which directional control issues developed in reduced visibility conditions such as the ones here with both the lack of centreline lighting on wide runways and Air Canada’s policy to not either have functioning rain repellent systems or apply the alternative windshield hydrophobic coatings. It was noted that two of these earlier investigations, to an Airbus A340-300 at Toronto in 2005 and to an Airbus A330-300 at Montreal in 2014 had been identified as events where the lack of a rain repellent system or the alternative windshield hydrophobic coating was likely to have raised the lateral runway excursion risk. A third of these earlier TSB-investigated events, involving an Airbus A320 of another Canadian operator at Varadero, Cuba in 2005 had identified the same reduced visibility risk but not because a rain repellent system was not installed but because it was and the flight crew were unaware of the fact.

A 2015 review by Airbus of ‘Lateral runway excursions upon landing’ was referenced on the wider subject of the circumstances in which pilots destabilise their aircraft late in the approach. This review included the advice that since an aircraft will be stable when flying with the AP engaged, once it has been disconnected, no sidestick inputs should be made until the pilot has had time to assess the aircraft trajectory.

Safety Action taken by Air Canada as a result of the excursion and made known to the Investigation included:

The Final Report of the Investigation was authorised for release on 28 March 2018 and it was officially released on 25 April 2018. No Safety Recommendations were made.