On 31 January 2010, an Airbus A320-200 being operated by the Canadian Airline Skyservice on a passenger flight from Toronto Canada to Varadero Cuba made a procedural night ILS approach to destination in heavy rain and, soon after touchdown on a flooded runway, drifted off the side and travelled parallel to it for a little over 500 metres before subsequently re-entering it at low speed. There were no injuries to the 186 occupants and the aircraft sustained only minor damage.

On 31 January 2010, an Airbus A320-200 being operated by the Canadian Airline Skyservice on a passenger flight from Toronto Canada to Varadero Cuba made a procedural night Instrument Landing System (ILS) approach to destination in heavy rain and, soon after touchdown on a flooded runway, drifted off the side and travelled parallel to it for a little over 500 metres before subsequently re-entering it at low speed. There were no injuries to the 186 occupants and the aircraft sustained only minor damage.

An Investigation was carried out by the Canadian TSB. It was established that both flight crew were experienced on the aircraft type and that the aircraft commander was designated as PF. It was noted that the destination TAF for the ETA when en route had indicated thunderstorm activity and rain showers clearing to broken cloud at 1500 feet agl after the rain and that the corresponding alternate TAF was for Visual Meteorological Conditions (VMC) with light winds.

It was noted that the flight crew had been aware that they would probably encounter reduced visibility nearer to landing but when the previous aircraft, a Boeing 737, called a go around, the reason for it was not given and no attempt was made to establish it from ATC, who also did not volunteer a reduction in visibility from 2000m to 1000m in the rain.

FDR data showed that the Instrument Landing System (ILS) approach was stable until the autopilot had been disconnected at 200 ft aal after which tracking of the extended centreline had become erratic. The flight crew reported that the forward visibility had worsened rapidly in heavy rain and they had eventually lost almost all visual reference in the flare. Flight Data Recorder (FDR) data showed that the threshold had been crossed at 20 feet agl followed by touchdown on the runway 195 m from the threshold with unintended drift.

The aircraft commander reported considering that attempting a go around or balked landing while in a low-energy state would be a high-risk manoeuvre and so had continued with the landing. The Investigation appeared to accept the validity of that decision by quoting Transport Canada Commercial and Business Aviation Advisory Circular No. 0141 ‘Low Energy Hazards/Balked Landing/Go Around’ statement that “an attempt to commence a go-around or balked landing while in the low-energy landing regime is a high-risk manoeuvre”.

After travelling for 518 metres, the aircraft had exited the right hand side of the runway at a speed of 130 knots and then travelled almost parallel to it for 532 metres before re-entering it at a speed of 40 knots 1310 metres from the threshold.

Once the aircraft was back on the runway and appeared to the crew to be substantially undamaged, the aircraft commander decided to taxi in. It was noted that the surface adjacent to the runway edge was hard-packed grass with some gravel patches and a slight down slope away from the runway for drainage.

It was not clear to the Investigation whether ATC had observed or understood that a significant runway excursion had occurred until the aircraft arrived on the gate. Once at the gate, aircraft damage caused by collision with runway edge lights, various other objects and debris was found to the tyres, the engine fan blades and some of the acoustic and ice impact panels on the right engine, one of the flap track fairings and the right hand air conditioning pack.

It was established that the aircraft had been equipped with a serviceable rain repellant system but that it was not used at any time during the arrival and that the flight crew had been unaware of its availability. It was found that it had only been re-activated after a prolonged period of disconnection awaiting an available minor modification in the autumn of 2008. No evidence that Skyservice had informed their flight crews of the re-activation of the rain repellent system could be found by the Investigation. 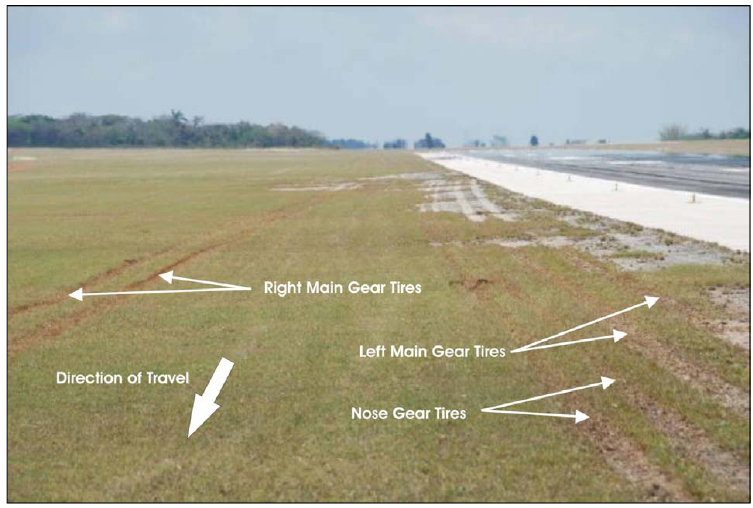 The Investigation made the following “Findings as to Causes and Contributing Factors”:

The Final Report of the Investigation: Aviation Investigation Report A10F0012 was authorised for release on 19 January 2011. No Safety Recommendations were made.

Comments on the Report by the French BEA and included as an Appendix to the TSB Report were made to the effect that the option to commence a go around in an A320 type aircraft existed at all times until reverse thrust was applied and noted that this had not been acknowledged by the Investigation.