On 23 August 2000, a Gulf Air Airbus A320 flew at speed into the sea during an intended dark night go around at Bahrain and all 143 occupants were killed. It was subsequently concluded that, although a number of factors created the scenario in which the accident could occur, the most plausible explanation for both the descent and the failure to recover from it was the focus on the airspeed indication at the expense of the ADI and the effect of somatogravic illusion on the recently promoted Captain which went unchallenged by his low-experience First Officer.

On 23 August 2000, an Airbus A320-200 being operated by Gulf Air on a scheduled passenger flight from Cairo to Bahrain commenced a night go around in VMC after its non precision approach to runway 12 at destination became unstable but then failed to establish a normal climb before descending at speed into the sea 3 miles from the airport. The aircraft was destroyed and all 143 occupants were killed.

An Investigation was carried out by a Technical Investigation Committee (TIC) appointed by the Bahrain Accident Investigation Board under the Chairmanship of the Minister of Transport. The designated TIC Chairman and appointed Investigator in Charge (IIC) was the accredited representative of the National Transportation Safety Board (USA) (NTSB). FDR and CVR data were successfully replayed and this and other evidence assembled were used to publish an Interim Factual Report on 27 March 2001. The TIC then proceeded with their analysis.

It was found that the Captain involved had originally been a Lockheed Tristar Flight Engineer with Gulf Air and had subsequently spent most of his First Officer time on the Boeing 767. Two months prior to the accident, he had achieved his first command on the A320, since when he had accumulated 86 hours in command. He had been on days off and vacation in the period 31 July to 18 August inclusive. The First Officer had received his pilot training as a Gulf Air cadet and after obtaining his licence had accumulated 408 hours on the A320.

It was found that the aircraft had been cleared for a VOR/DME approach to runway 12 at Bahrain but the crew had then misjudged the descent, At about 1nm from the runway, and still at an altitude of about 600 feet, a left hand orbit had been requested and approved. However, this orbit did not lead to suitable positioning for a landing and a go around was commenced.

The Investigation considered all aspects of the approach and go around but noted that it was the failure of the Captain as PF to fly the go around properly that led to the loss of the aircraft.

It was found that the go around had not been initiated in accordance with SOPs. DFDR data showed that TOGA thrust was applied at 544 feet agl but that rotation to 15° pitch up never occurred. Instead, pitch was initially held at about 9° until the flaps were re-configured and the landing gear retracted after which side stick input from the Captain decreased it to 6°. Such a shallow pitch up with TOGA thrust set led to a rapid airspeed increase. Also, instead of flying runway heading, a turn continued. When the First Officer called ‘speed, over-speed limit’ and reminded the Captain ‘Speed checks, flaps three’, he received the response ‘flaps up’ but there was no increase in the pitch attitude.

Soon afterwards, at a height of 1058 feet agl, the Captain applied a nose down side stick input that was held for approximately 11 seconds which caused the aircraft to pitch down to the maximum allowable angle of 15°.

It was concluded that “the most likely reason for (this) 11 second forward side-stick input by the Captain was that it occurred in response to his strong (but false) physical sensation that the aircraft was pitching up” and in conjunction with his failure to observe (or believe) the correct indications of pitch attitude on the instruments. It was noted that it was “effectively this nose-down side-stick input that set in train the final sequence of events leading to the accident”.

As a direct consequence of the prolonged nose down side stick input, the first GPWS ‘SINK RATE’ activation occurred, followed almost immediately by a ‘PULL UP’ warning. These alerts continued every second until surface impact occurred 11 seconds later. There was no obvious response by either pilot to the continued GPWS alerts. The Captain did make an 11.7° nose-up side stick input at this time but this was not believed to be such a response and in any case had only effected an upward pitch change of less than 7°, so that the aircraft had continued to descend. The last recorded pitch attitude was 6.3° nose down.

The CVR showed that neither the Captain nor the First officer had verbalised any response to the sequence of GPWS warnings before impact and instead had continued to comment ‘gear up’ and ‘flaps all the way (up)’. It was noted that, although the persistent GPWS warnings “indicated a grave and imminent threat to the aircraft and continued to sound every second until the end", the CVR did not reveal any evidence that this dangerous situation was recognised by either the Captain or the First Officer.

It was noted that the prolonged nose down side stick input made by the Captain which precipitated impact had occurred when, although the in-flight visibility was excellent, ground lighting was no longer in view and the aircraft was heading into an area of complete darkness. It was noted that such conditions are conducive to Somatogravic Illusion. In the absence of external visual cues, this illusion can arise as rapid forward acceleration creates a powerful pitch up sensation if this is not dismissed by reference to the display of pitch attitude on the aircraft instruments. This scenario, coupled with a failure of the First Officer maintain his own situational awareness and intervene, was considered to be the only conceivable explanation for the accident outcome. 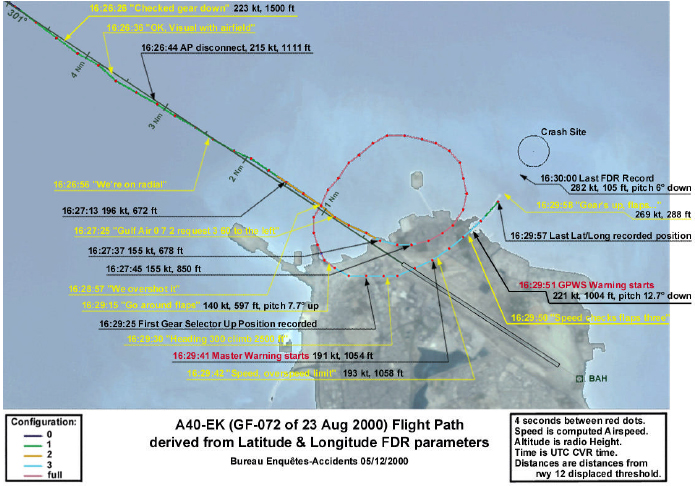 A320 trajectory with selected FDR, CVR, and ATC communication excerpts (reproduced from the Official Report). Click on image to enlarge

A total of twelve Safety Recommendations were made as a result of the Investigation Board as follows:

The Final Report of the Investigation was adopted by the Chairman of the Bahrain AIB on 10 July 2002 and published online.