On 11 April 2012, a Hermes Airlines A320 commanded by a Training Captain who was also in charge of Air Operations for the airline was supervising a trainee Captain on a night passenger flight. The aircraft failed to establish on the Lyons ILS and, in IMC, descended sufficiently to activate both MSAW and EGPWS 'PULL UP' warnings which eventually prompted recovery. The Investigation concluded that application of both normal and emergency procedures had been inadequate and had led to highly degraded situational awareness for both pilots. The context for this was assessed as poor operational management at the airline.

On 11 April 2012, the crew of an Airbus AIRBUS A-320 (SX-BHV) being operated by Hermes Airlines on a non-scheduled passenger flight from Ajaccio to Lyons Saint-Exupéry in night Instrument Meteorological Conditions (IMC) and cleared to join the ILS at Lyons descended towards terrain until a combination of Terrain Avoidance and Warning System (TAWS) PULL UP and ATC intervention based on MSAW activation led to the attempted approach being discontinued. A second uneventful approach continued to a landing. Pilot Line Training was in progress.

An Investigation was carried out by the French BEA. Recorded data from the SSFDR and ATC sources was used to assist the Investigation.

It was found that the Commander, who had been PM for the flight and occupying the right seat, had accumulated 17000 hours total flying experience which included 620 on the aircraft type involved. He held a Greek-issued ATPL with current ratings as an instructor and examiner on both the A320 and the B737 and was also "in charge of air operations" for the Operator Hermes Airlines. The Captain under training had accumulated 10500 hours but only 33 hours as a Captain - on the ATR42. He had logged 25 hours under training on the A320 since obtaining the corresponding type rating five months earlier.

En route, the crew had learned from the ATIS that an ILS to runway 18L could be expected but once with APP, the controller suggested radar vectors to the ILS for Runway 36L due to the prevailing light winds (110° / 6 knots), which was accepted.

Soon after beginning radar vectoring, with the aircraft AP engaged, the controller realising that the aeroplane was high in relation to the ILS GS asked if the 40 nm remaining was sufficient and received the reply that "actually we... we’ll need to make a thirty six". The controller did not interpret this as a need for delaying action and responded with a closing radar heading of 315°. However, as the crew still had the Ajaccio ILS frequency selected, the FMGS did not automatically select the ILS for which the vector had been given.

The controller gave headings which slightly extended the track miles to the ILS LOC as it was apparent that the aircraft was still likely to intercept the ILS GS from above. The crew eventually sorted out their incorrect ILS frequency but not before the aircraft had passed through the LOC without intercepting it because the correct ILS frequency was not active. The controller gave a new closing heading from the other side but the LOC was crossed for a second time when capture was attempted at an airspeed of 240 knots.

The crew then "decided to select an altitude of 400 ft on the FCU" which caused the AP mode to change from ALT* to V/S, the latter at 1200 fpm, the vertical speed of the aircraft at the point of V/S mode engagement. APP mode was then selected as the aircraft finally turned left to intercept the LOC, but by now the aircraft was well below the GS and continuing to descend clean at 230 knots. Shortly after passing the radar minimum safe altitude of 3000 feet, (at the point marked 5 on the diagram below) an EGPWS hard warning 'TERRAIN PULL UP' was annunciated. The aircraft was 950 feet agl - an altitude of 2460 feet.

The Commander took control and selected TOGA thrust and pitched up towards 9.5°, without calling that he was taking control. Both APs disconnected and, because the aircraft was still clean, TOGA (SRS) mode did not engage, which deprived the crew of the expected nose-up command for the avoidance manoeuvre being commenced. HDG and VS 1200fpm down were still engaged and when pitch attitude reached 9°, nose-down inputs were made by the Commander.

A few seconds later, with the aircraft approaching an altitude of 2500 feet, the controller, in response to an MSAW activation, called "you maintain 2,500 ft, you are too low, you are below the glide". It was considered that in response, the Commander had probably tried to stabilise the aircraft at 2500 feet. Nose-down inputs were maintained for about twenty seconds and thrust levers were moved to 'CLIMB' as the crew "was waiting for the controller’s instruction to climb". Airspeed began to increase sharply and descent re-commenced. When the aircraft reached 900 feet agl with a speed of 320 knots (position 6 on the diagram) the thrust levers were set to 'IDLE' as a second MSAW activation occurred and the controller intervened with "…check your altitude immediately, you are too low".

A few seconds after this, dual side-stick input occurred when the trainee Captain made nose-up inputs whilst the Commander was applying nose-down inputs, the net effect was a climb. Dual input occurred because the Commander had failed to select the take-over button on his side-stick when assuming the role of PF. The crew asked to abandon the approach and the controller instructed them to climb to 5,000 feet. When the dual input stopped, the Commander continued in control as PF and engaged AP2. Radar vectoring to a second approach was uneventful and a landing on Runway 36L followed.

In respect of the required response to an EGPWS 'PULL UP' annunciation at night or in IMC, the FCOM was noted to require immediate and full nose-up input on the side-stick as well as thrust levers to TOGA and a corresponding call. In respect of the response to an MSAW activation, the applicable procedures were found to require the issue of an instruction to climb immediately to an altitude greater than or equal to the radar minimum safe altitude. It was note that neither response had occurred as prescribed.

Given the low command experience of the trainee relative to his very substantial experience as a Co-pilot, the Investigation looked at the process by which Hermes Airlines selected Co-pilots for promotion to command and found that although there were some guidelines, unlimited discretion to ignore these was afforded to "the Operations Manager and Chief Pilot". Officials of the airline were quoted by the Investigation as saying that the airline had (recently) received 4 Airbus A320s in addition to the Boeing 737s already in service and that "given the urgent need for flight crew and regulatory documentation, the Operations Manual was drafted hastily and contained inconsistencies in the criteria for appointments to various positions". 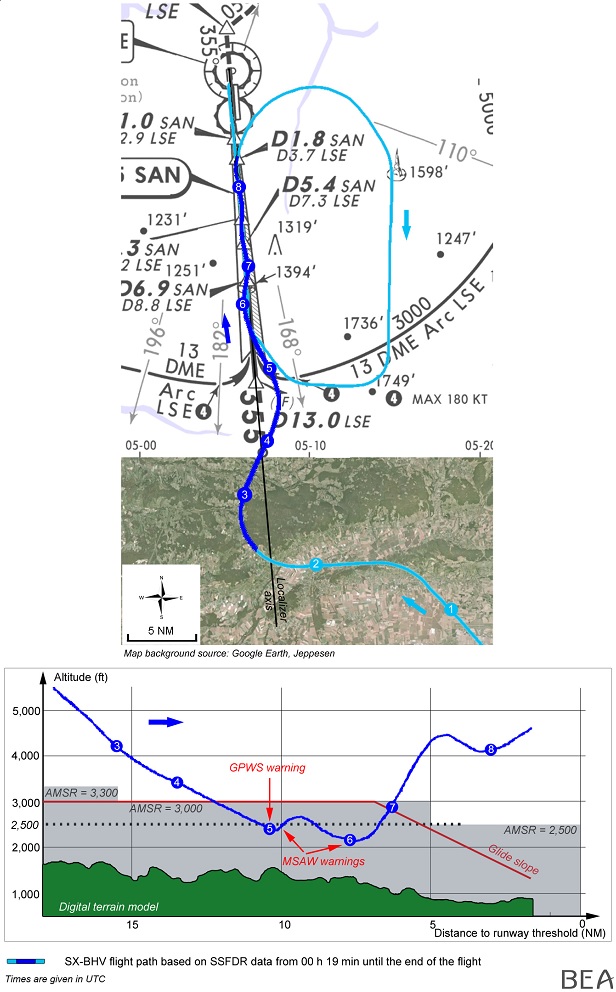 Illustration reproduced from the Official Report

The formal Conclusion of the Investigation was that the causes of the event were:

The Final Report of the Investigation was published on 14 August 2015. No Safety Recommendations were issued as a result.