On 23 May 2022, an Airbus A320 came extremely close to collision with terrain as the crew commenced a go around they did not obtain any visual reference during a RNP approach at Paris CDG for which they were using baro-VNAV reference to fly to VNAV/LNAV minima. The corresponding ILS was out of service. The Investigation has not yet completely established the context for the event but this has been confirmed to include the use of an incorrect QNH which resulted in the approach being continued significantly below the procedure MDA. Six Interim Safety Recommendations have been issued.

On 23 May 2022, an Airbus A320 (9H-EMU) being operated by Airhub Airlines for Norwegian Air Sweden on a scheduled international passenger flight from Stockholm to Paris CDG as NSZ4431 made a go around from its day IMC RNP approach to runway 27R at destination during which it came within a recorded 6 feet of terrain without any flight crew visual reference. A further similar approach was then flown using the same incorrect altimeter subscale setting but this time, weather conditions had improved and after becoming visual, the aircraft was then positioned onto the correct vertical profile for an uneventful landing. MSAW activations occurred during both approaches but there were apparently no on aircraft EGPWS activations. A total of 178 occupants were on board.

A Serious Incident Investigation was immediately commenced by the French Civil Aviation Accident Investigation Agency, the BEA. In view of the evident seriousness of the occurrence, the BEA proceeded rapidly to assemble as much factual information as possible. Although this stage of the investigation is not yet complete, sufficient information has been gathered for important findings to have already been made. A Preliminary Report which includes six Safety Recommendations on which this summary is based has therefore been issued.

It was noted that operator of the aircraft, Airhub Airlines, is the Malta-based AOC-holding subsidiary of the Lithuanian-based ACMI (Aircraft, Crew, Maintenance, & Insurance) company GetJet Airlines. The aircraft was being operated with the Captain acting as PF.

Aware that the destination ILS was out of service, the crew briefed for an RNP approach using VNAV/LNAV minima (charted as 752 feet QNH) since their aircraft was not equipped to fly to RNP LPV minima. RNP approach procedures at Paris CDG did not constrain flights cleared to use them to declare the minima being used unless a Lateral Navigation (LNAV) approach was intended.

The crew copied the ATIS which included BKN (broken) cloud at 1500 feet, visibility 10km and QNH 1001. They stated that throughout their first approach they had remained “in cloud, without visual references [and had] experienced moderate turbulence and flown through heavy rain, using the wipers at high speed”.

Once working the CDG Intermediate Approach controller, the flight was cleared to descend to 6000 feet on 1011 instead of the correct 1001 and this QNH was read back as given. Two minutes later, the same controller re-cleared the flight to 5000 feet and for the “full RNP approach” to runway 27R whilst repeating the same incorrect QNH. A minute later, the same controller was recorded when giving the same descent and approach clearance in English to an inbound Easyjet flight to have again used the wrong QNH of 1011 but received a readback which included the correct QNH 1001 which the controller did not notice. Almost immediately, she then issued a further clearance to descend to 5000 feet to an Air France flight but this time used the correct QNH of 1001 which was correctly read back by the crew.

Shortly afterwards, the investigated flight reached the approach Final Descent Point with the altimeters indicating approximately 4900 feet - the actual altitude was approximately 4,600 feet - and was instructed to change to the TWR North frequency. On checking in there, a landing clearance and wind check was given with 3 nm to go and the clearance correctly read back. Half a minute later, as the descent on track continued, the radio altimeter height indication became live as the aircraft passed 2,500 feet agl. Apart from the consequences of descending on a vertical profile approximately 280 feet below the one required by the RNP procedure for which the flight had been cleared, the approach was essentially ‘stabilised’ throughout with a rate of descent of between 710 and 740 fpm.

Half a minute after this, with 3.1 nm to go, the indicated altitude based on the incorrect QNH was 1400 feet (which with the aerodrome elevation at 400 feet was apparently the required 1000 feet aal stabilisation height) and the aircraft was fully configured and at the applicable VAPP of 139 KIAS. The radio altimeter reading was 837 feet agl.

An MSAW activation occurred at an indicated 891feet QNH (the actual altitude based on the correct QNH at this time was 617 feet) whilst at a height 200 feet agl when still 1.53 nm from the runway (point 1 on the two following illustrations). Three seconds later, on reaching 802 feet indicated QNH (the applicable MDA since the operator required 50 feet to be added to the charted VNAV/LVAV minima of 752 feet QNH), the crew reported having had no visual reference and had therefore prepared to go around.

The go around was announced to ATC (point 5 on the two following illustrations) and clearance to climb to 5000 feet on (the correct) QNH of 1001 was given by the controller but read back accompanied by the incorrect QNH of 1011 previously given which was not detected by the controller (point 6 on the two following illustrations). At the same time, TWR south assisting controller advised the TWR north assisting controller that they had not switched on their runway approach lighting despite the very poor weather on the approach. It was noted that during these exchanges relating to the go around, the TWR controllers had been unable to see the aircraft although “after a few seconds, they had seen it coming out of the clouds, at low height, with a pitch up attitude”.

As the climb continued, the AP was re-engaged at a recorded 593 feet agl with the aircraft still 0.3 nm from the runway threshold. Shortly afterwards, the TWR north controller switched on the approach lights and was then replaced by the assisting controller supported by a new assistant. When the flight was downwind, it was transferred back to the Intermediate Approach frequency to be positioned for another approach. The controller there advised the crew to expect an RNP approach to runway 27R. This was subsequently commenced without any further confirmation of the QNH and the same incorrect QNH of 1011 originally given by ATC remained set. On being transferred to TWR north and cleared to land, the crew asked if the approach lights were on and this was confirmed.

At 3.1 nm from the runway when at 842 feet agl, an MSAW activation occurred and the controller responded with “I just got a terrain alert, are you okay?” The crew replied with “we are established on path and we have visual now” (and subsequently stated that they had not understood the reason for this message). After continuing to descend until reaching 572 feet agl whilst still 2.57 nm from the runway - still 150 feet above the MDA based on the over-reading altimeter - the AP was disconnected, the FDs were switched off and a climb to regain the correct vertical profile based on PAPI indications was made. The remainder of the approach and the subsequent landing were then completed normally. 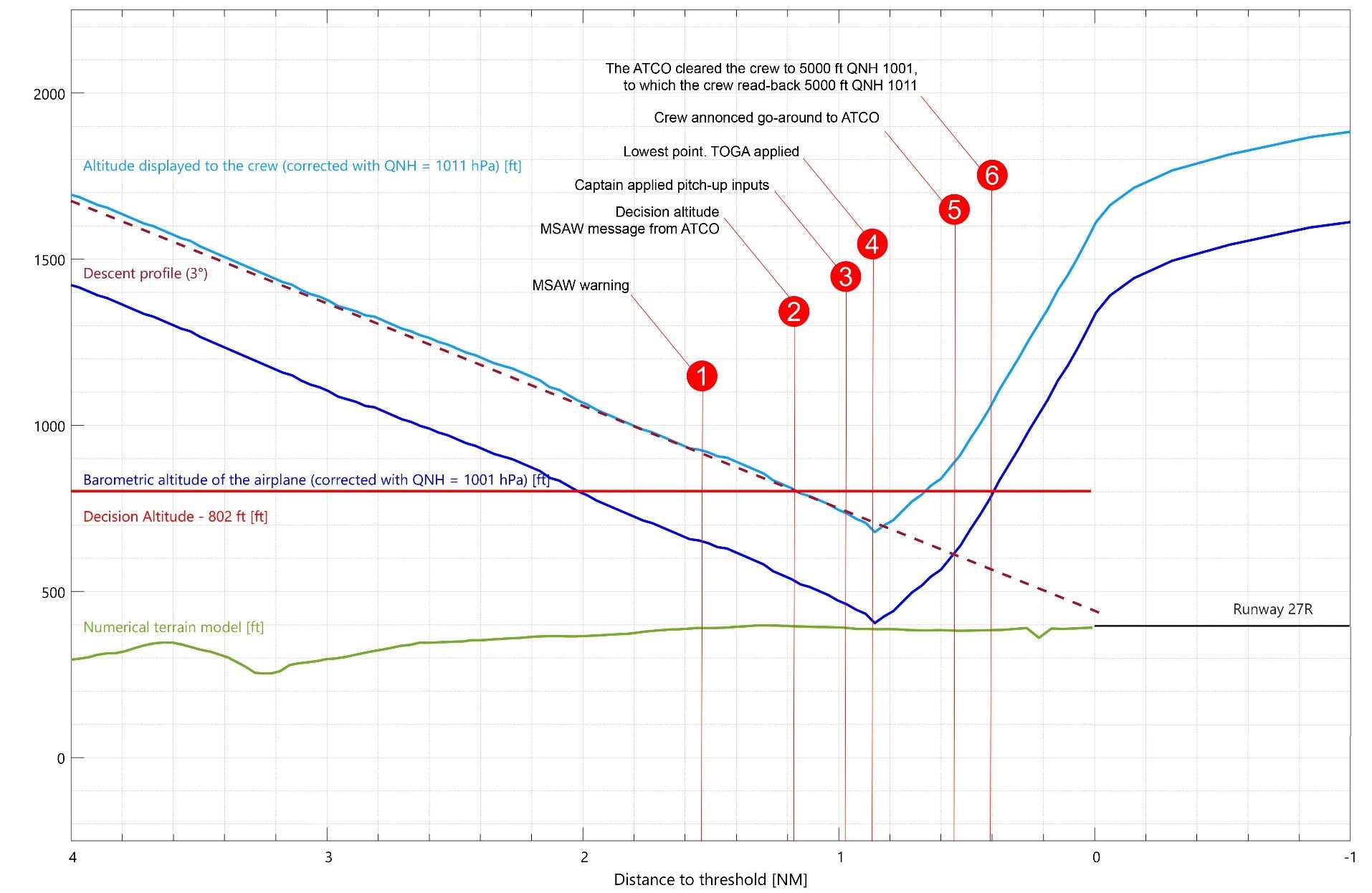 The vertical profile of the first approach computed from flight recorder data (the dark blue line is the descent as flown, the lower line is the on track terrain height. [Reproduced from the Official Report] 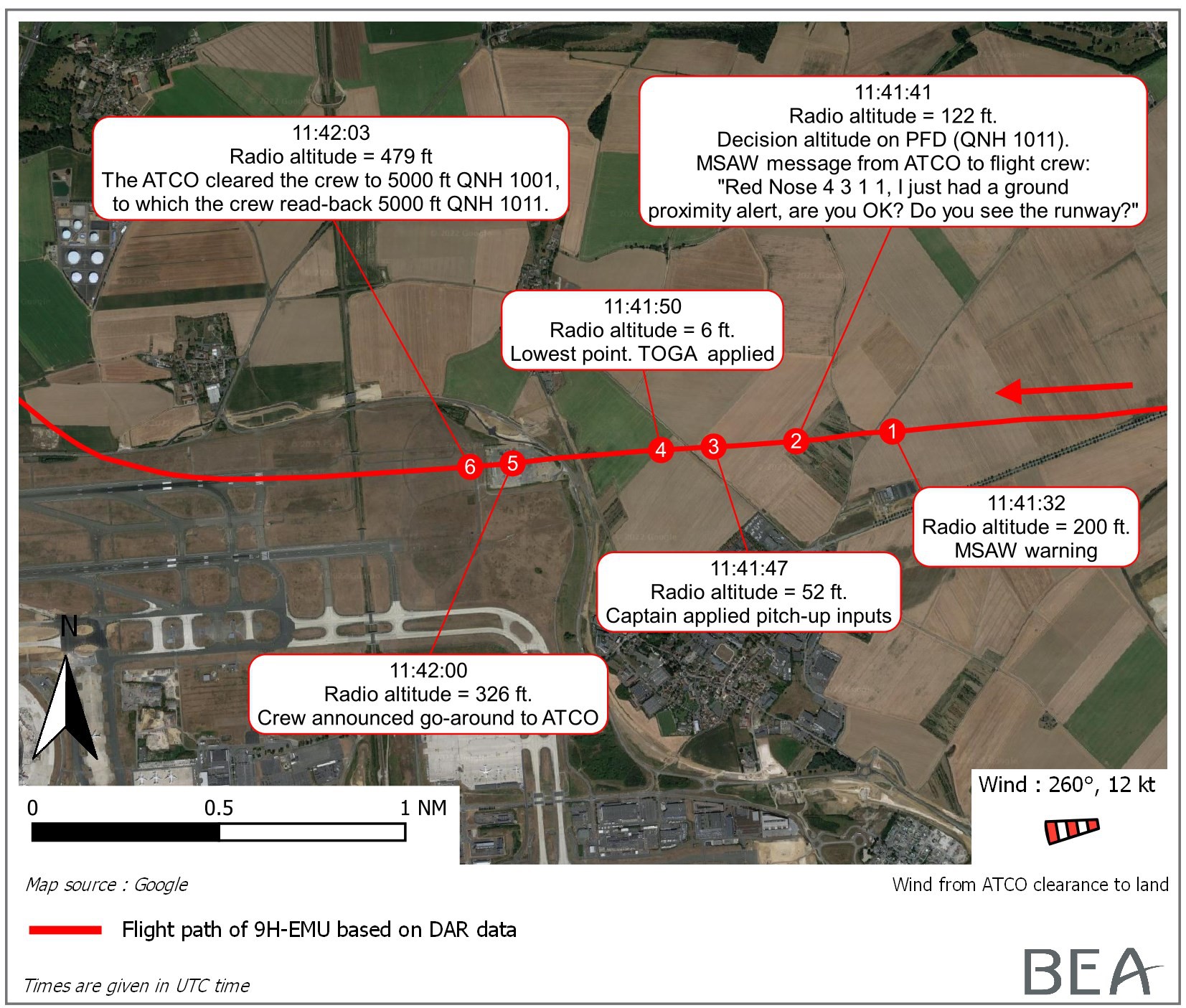 The similarly annotated horizontal flight path for the first approach. [Reproduced from the Official Report]

It was noted that a suitably equipped aircraft could have made use of the RNP approach clearance given to fly to LPV minima and therefore not flown a vertical profile dependent on use of the correct QNH, but that the aircraft involved was not so equipped.

The aircraft FDs included a Vertical Deviation Indicator (V/DEV) which allowed the crew to see the extent of any deviation from the FMGC-generated approach vertical profile on the altitude scale within the range +/- 150 feet but of course the FMGC (Flight Management Guidance Computer) path was based on the incorrect QNH.

The adverse weather reported to have been present during the first approach was confirmed by a post flight analysis conducted by the French Meteorological Service to have been caused by heavy rain falling from Cb cloud characterised by “strong vertical development” which had significantly reduced visibility for a period of about ten minutes. This continued during the second approach but the worst affected area no longer included the final part of the approach which by then had similar conditions to those prevailing over the northern part of the airport.

A Summary of the Factual Findings relating to CFIT risk so far:

Six Safety Recommendations have been made as follows:

Further investigative effort is now being made into, but not limited to the following:

The Preliminary Report was simultaneously published in both English and definitive French language versions on 12 July 2022.