On 3 April 2012, the crew of an Air France Airbus A320 came close to loosing control of their aircraft after accepting, inadequately preparing for and comprehensively mismanaging it during an RNAV VISUAL approach at Tel Aviv and during the subsequent attempt at a missed approach. The Investigation identified significant issues with crew understanding of automation - especially in respect of both the use of FMS modes and operations with the AP off but the A/T on - and highlighted the inadequate provision by the aircraft operator of both procedures and pilot training for this type of approach.

On 3 April 2012, an Airbus A320 (F-HEPE) being operated by Air France on a scheduled passenger flight from Paris CDG to Tel Aviv making an RNAV VISUAL approach in day Visual Meteorological Conditions (VMC) to runway 26 at destination was mismanaged by the crew so that the recovery from an unintended low speed condition which triggered flight envelope protection led to an overspeed warning. A second and uneventful approach was subsequently made. There were no injuries to the 155 occupants and no resultant aircraft damage.

An Investigation was carried out by the French Bureau d'Enquêtes et d'Analyses (BEA). Recorded flight data was available. It was established that the flight crew involved had been a 58 year old male Captain with around 20000 flying hours over half of which had been gained as a Flight Engineer and 8000 as a Co-pilot on both A320 and A330/340 aircraft. Since gaining a command, he had accumulated 1800 hours on the A320. The 27 year old female Co-Pilot, designated as PF for the incident flight, had accumulated a total of 500 flying hours which included 200 on the A320. 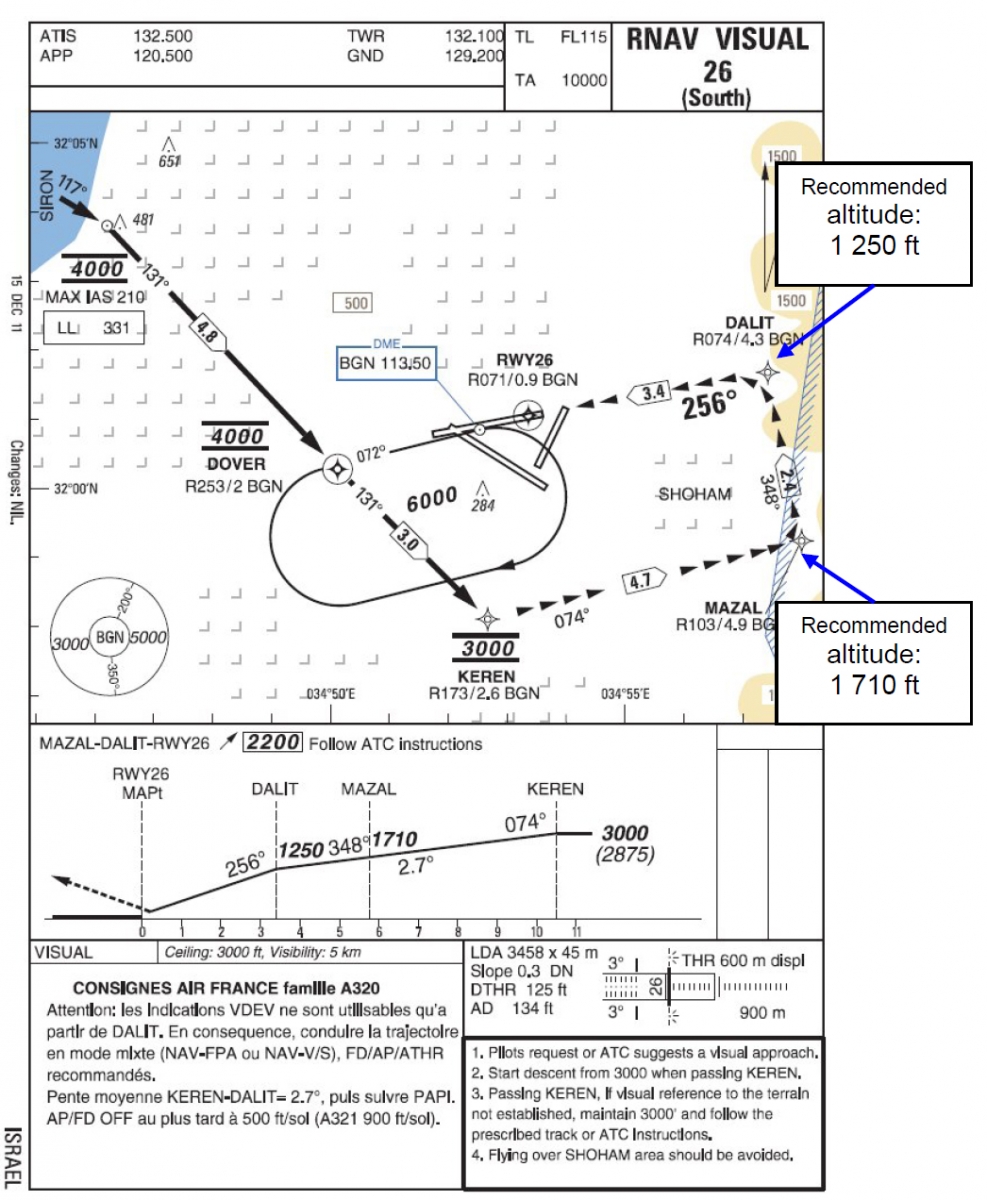 The approach attempted at Tel Aviv in CAVOK conditions briefed as an ILS approach to runway 26 with only incidental reference to the possibility of an RNAV VISUAL approach for which the Air France chart is shown above.

When ATC offered the RNAV VISUAL Approach, it was accepted but no further briefing had taken place, despite the fact that the PF had never previously flown one and the Captain subsequently stated that he was “not very familiar with this destination”. Neither pilot had received training on this type of approach and there was no reference to it in the Air France ‘Technical Use Manual’. The recommended descent on the charted procedure and its note involved the use of FD/AP/ATHR to achieve a mean slope of 2.7° between waypoints KEREN and DALIT, thereafter following the Visual Approach Slope Indicator Systems and selecting AP/FD OFF below 500 ft agl.

On the incident flight, descent to 3000 feet QNH for the downwind leg had been made in DES/NAV mode and then, half way along the downwind leg, the vertical mode had been changed to OPEN DESCENT which resulted in thrust being reduced to idle. Shortly after this, managed speed was selected and fully configured the aircraft for landing, ahead of the recommended position which was “once established on the glide path, just before lining up on final”. The effect of this action with idle thrust maintained was a rapid reduction of the speed towards the applicable Vapp of 138 KIAS with a lower stall margin than the recommended SOP of a higher target speed prior to final approach.

Then, when commencing the subsequent turn onto final approach at a speed already 3 knots below Vapp, instead of following the FD pitch command, a necessity when using the OPEN DESCENT mode, the PF, for reasons which the Investigation was unable to determine, “made a pitch-up input for ten seconds”. Speed dropped to Vapp-16 knots as the angle of attack increased from 5.5° to almost 11°. The aural warning for low speed was activated and in response, with no call from either pilot, the PF attempted to commence a go around by selecting TO/GA thrust. The Investigation found that at this point the Captain had made a pitch down input on his sidestick without pressing the takeover pushbutton. He subsequently stated that this was because “he still had (it) in mind to continue the approach”. Then, flight envelope protection was triggered and the ALPHA FLOOR and TOGA LOCK mode followed – although according to the findings of the Investigation, the PF “did not identify the locking of the TOGA LOCK” and the PM “did not identify the (activation of the) ALPHA FLOOR mode”.

Configuration 3 was selected and an altitude of 3,000 feet set - despite the fact that the missed approach stop altitude from the chart is actually 2200 feet. As the speed increased, the PF retarded the thrust levers to ‘CLIMB’ but this had no effect because the crew had still not noticed that TOGA LOCK mode was engaged. As the aircraft approached 2,000 ft, the crew selected that altitude, re-engaged the AP, retracted the landing gear, selected configuration 1 and, with the speed at 208 KCAS, selected a speed of 188 KIAS. As a result of inertia and with full thrust still selected, the speed continued to increase and since the VFE in configuration 1 was 215 KIAS, the overspeed warning was activated. In response, the PF selected the thrust levers to idle, which disengaged both the A/T and, as a consequence, TOGA LOCK mode, which allowed aircraft energy to decrease, but not before a maximum speed of 223 KCAS and a maximum altitude of 2500 feet had been reached.

Shortly afterwards, the crew re-engaged the A/T and recovered full control of the aircraft and the transition to and completion of a second approach proceeded without further event.

It was noted that the RNAV VISUAL approach procedure which the crew had accepted involved the provision of only lateral guidance from the FMS since Air France had chosen not to input a continuous descent path for the approach. It was also noted that “the concept of an RNAV VISUAL approach does not appear in the EU-OPS regulation, this type of approach not being used yet in Europe”. At the time of the incident, it was noted that the use of this procedure “was not clarified in the Air France Technical Use manual” and Tel Aviv was the only Air France short/medium haul destination.

In respect of the CRM displayed on the flight deck of the incident aircraft, it was noted that:

It was also found that five days after the investigated event, a similar event had occurred on the same approach at Tel Aviv to another Air France A320 with a different crew. However, this time the crew had responded as soon as the low speed warning was annunciated by increasing thrust and had continued the approach without the ALPHA FLOOR protection engaging.

It was considered that both events highlighted a number of common elements:

The Investigation concluded that the Causes of the investigated upset were as follows:

Safety Action by Air France since the investigated event in respect of the lack of pilot training on the Tel-Aviv RNAV VISUAL approach has involved the issue in October 2012 of an information leaflet to A320 pilots and the creation of a video of the approach available to pilots. Simulator training on the approach began in March 2013.

Air France also advised prior to publication of the report of the Investigation some 20 months after its occurrence that “the establishment of a specific procedure for RNAV VISUAL approaches in the airline’s documentation is currently under consideration and should be published shortly”.

There was no reported action in respect of “the lack of knowledge of A/T operation and the importance of following the FD in OPEN DESCENT mode” identified during the Investigation.

Three Safety Recommendations were issued as a result of the Investigation as follows:

The Final Report was published 20 December 2013 and is also available in French.