On 22 December 2016, an Airbus A320 cleared for a night approach to runway 16L at Haneda, which involved circling to the right from an initial VOR approach, instead turned left and began an approach to a closed but partially lit runway. ATC noticed and intervened to require a climb away for repositioning to the correct runway using radar vectors. The Investigation found that the context for the crew’s visual positioning error was their failure to adequately prepare for the approach before commencing it and that the new-on-type First Officer had not challenged the experienced Captain’s inappropriate actions and inactions.

On 22 December 2016, an Airbus A320 (JA811P) being operated by Peach Aviation on a scheduled international passenger flight from Taipei Taoyuan Taiwan to Tokyo Haneda as flight 1028 in night VMC failed to follow its clearance to position via a right turn to final approach for runway 16L and was observed by ATC to be lining up for closed runway 23. The instruction to discontinue this approach was given and the flight was then radar vectored to finals 16L without further event.

An Investigation was carried out by the Japan Transport Safety Board (JTSB). FDR data was subsequently downloaded in support of the Investigation in association with recorded ATC data but that from the CVR was not as the aircraft had continued flying and relevant information had been overwritten. It was a noted that the 62 year-old Captain, who was acting as PF for the sector, had accumulated 24,104 total flying hours which included 8,490 hours on type. The 43 year-old First Officer had a total of 3,530 flying hours of which just 405 were on type having recently completed type conversion.

It was established that having learned from the ATIS that the surface wind was light and variable with no cloud below 3,000 feet and that an ILS approach to runway 34R at Haneda could be expected, this was initially confirmed by the Tokyo APP controller on checking in. But a couple of minutes later, with the aircraft descending through 10,600 feet QNH, it was advised that a change to runway to 16L using a VOR A procedure could be expected. Passing 6300 feet QNH, the flight was then cleared for this approach joining via the ‘DARKS’ STAR. The procedure involved flying an inbound course of 274°M towards the Haneda VOR and then turning right to circle left hand to finals. 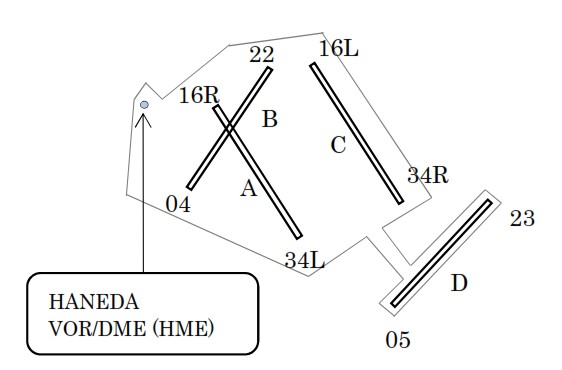 The runway layout at Haneda shown the position of the runway VOR. [Reproduced from the Official Report]

To assist with the visual positioning segment, Circling Guidance Lights (CGL), Approach Light Beacons (ALB - flashing white lights to indicate significant points on the approach) and a Landmark Beacon (LBN - also a flashing white light) were installed to provide specific points of reference whilst circling and are shown on the illustration below. 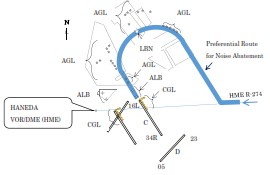 The preferred (noise abatement) circling track from the VOR approach to runway 16L showing the guidance lighting provided. [Reproduced from the Official Report]

The aircraft arrived in the vicinity of the ‘DARKS’ waypoint at the prescribe 1,800 feet QNH and proceeded to fly more or less along the 274° VOR radial with the AP engaged and VS mode selected but immediately began to descend below the vertical profile and by the FAF at waypoint SAZAN which was 5.9 nm from the VOR, it was almost 400 feet below the procedure height, already marginally below the MDA of 760 feet QNH and fully configured for landing. The AP and FD were then disconnected and the aircraft was turned left to line up with the runway 23 extended centreline at 620 feet QNH. This runway was temporarily closed as per a night-time schedule for alternating runway use subject to suitable weather conditions. Although the approach lighting aids for this runway were all off, the runway lighting remained on as per agreed routine procedures and it was these lights which the Captain used to align with final approach. As thus turn was being made, the TWR controller initially called to say “continue approach, we have one more to depart” but as the new heading took effect and descent continued just 1.5nm from runway 23, the controller recognised what was happening and instructed the aircraft to “turn right immediately”. The aircraft was at 530 feet QNH but continued descending and did not turn right and 11 seconds later, the TWR controller instructed the aircraft to “turn right 330, climb 3000” and this time the turn and climb were commenced. The minimum altitude reached was 490 feet QNH. Thereafter, radar vectors were provided towards finals for runway 16L and the aircraft eventually landed there without further event. An annotated illustration of the ground track leading to the attempted approach to runway 23 is provided below.

Although visibility had been in excess of 10 km, the Captain subsequently stated that he had been unable to identify runway 16L and “had no memory of passing altitude of SAZAN or the automatic callout at MDA” and had therefore “instinctively let the aircraft turn left because he saw the runway which looked bright in left front of him and he ordered the FO to set the HDG/TRK selector to the 157 degree runway 16L track and set TRK/FPA”. He had then “realised that something was wrong because he could not see the HDG (TRK) bug on PFD and noticed that the magnetic heading indicated 230 degrees”. He continued by stating that “lots of concerns came up to his mind and he wondered if the runway in front of him might not be runway 16L but runway 23 which was closed” whereas “a closed runway must be in complete darkness”. He then remembered hearing the first TWR instruction to turn right but took no action because he was “confused by being instructed to turn in an opposite direction from the one prescribed in the missed approach procedure”. However, he had then “received another specified instruction on direction and altitude and followed it”. 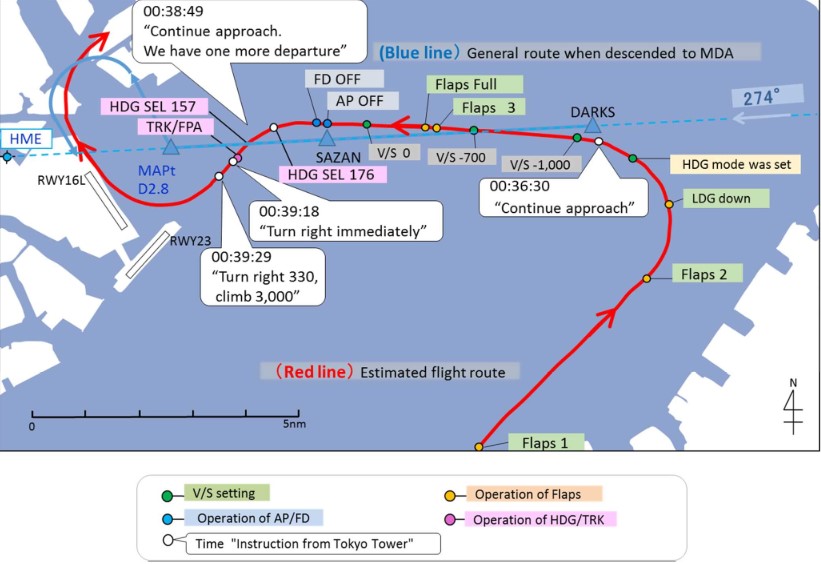 The track actually flown relative to the VOR-A radial and visual circling. [Reproduced from the Official Report]

The Captain stated that although he had a decade of experience on the Airbus A320 and had frequently landed on 16L at Haneda in the past, he had not previously flown the VOR A approach followed by a circling approach to runway 16L and recognised with hindsight that “he should have reported to the Controller that he had been short on time for preparations and he should have requested a holding or a radar guidance for a visual approach”.

The First Officer noted that the VOR A procedure was not loaded in the database but that although the Captain gave no brief on what the VOR procedure and circling would involve, he did have a clear ‘mental map’ of what was required and although he had not located runway 16L, he had easily identified one of the ALBs associated with the required circling. However, he was “mostly concentrating on operational processes such as setting of flaps (and) could not monitor the flying course properly”. When he saw that the aircraft was turning left and was instructed by the Captain to set the runway 16L centreline, he became confused because he was expecting “a right turn first to enter the downwind and then turn left in the base leg to align”. However, he stated that he had “relied on the Captain and interpreted that the aircraft flew to the point where a runway was just in front of him before he noticed” and attributed this to his being “unable to monitor properly (and so) did not try to confirm his odd feeling with the Captain”. On hearing the first instruction to turn right after they had completed the landing checklist, he stated that just as he was about to “ask the reason why they should turn right there”, they received another specific instruction to climb and turn right and followed it.

The Investigation found that communications procedures within the aircraft operator in the event of “irregular operations” which explicitly included Accidents or Serious Incidents had not been followed after the event so that the crew and aircraft had continued operating and no notification was made to the Safety Regulator (the CAB) or JTSB until the QAR data from the event had been processed.

In respect of the performance of the flight crew, the Investigation considered that there had been a failure to see the unexpected change of approach to one which was unfamiliar to both pilots as a “threat” in TEM terms. It was concluded that the evidence from the Investigation was that it had occurred “because the CRM skills […] of the Captain and the First Officer had not been sufficiently learned during the corresponding Operator-provided education and training” and that the Operator needed to revisit this. It was also evident that the Operator had failed to recognise that there was a finite and unaddressed risk if an approach procedure which was sometimes used was not in the procedures database so that only a paper chart was available. Finally, it was concluded that given the reliance on flight crew self-study as a means to developing airport familiarity, there was insufficient monitoring of the resulting crew knowledge or even the use of self-study materials.

The Investigation formally determined that the Probable Causes of the investigated Serious Incident were that “when conducting a VOR A approach to land on runway 16L at Tokyo Haneda the crew mistakenly commenced an approach to runway 23 which was closed because advance preparations for the VOR A approach by the Captain and the First Officer were not sufficient - neither identified the change of landing runway as a ‘threat’ and they failed to manage workload, properly monitor or provide advice".

Safety Action taken as a result of the Investigation was noted as having included the following:

The Final Report was adopted by the JTSB on 12 January 2018 and published on 22 February 2018. No Safety Recommendations were made.