On March 20 2012 an Airbus A320 failed to taxi as instructed after vacating the landing runway 12L at Dubai and crossed the lit stop bar of an intersection access to runway 12R before stopping just in time to prevent a collision with a Boeing 777-300ER about to pass the intersection at very high speed on take off. Taxi clearance had been correctly given and acknowledged. The aircraft commander had extensive aircraft type experience but the inexperienced First Officer appeared to be undergoing early stage line training with a Safety Pilot present. No Final Report of the Investigation has been released and its status is unclear.

On 20 March 2012, an Airbus A320-200 being operated by Ural Airlines on a passenger flight from Krasnodar, Russia to Dubai failed to comply with its issued taxi clearance after vacating runway 12L at destination and, in a forward visibility reduced by blowing dust but still around 1000 metres, taxied past an intersection holding point for the parallel runway 12R as a Boeing 777-300ER being operated by Emirates Airline on a scheduled passenger service from Dubai to Hamburg was about to pass that intersection at very high speed on take off. The A320 then stopped just before entering the runway.

An Investigation was immediately commenced by the GCAA Air Accident Investigation Sector. The SSFDR from the Boeing 777 was subsequently removed and downloaded and data from the A320 ‘Digital Aids Recorder’ was downloaded by the Operator and provided to the Investigation. Surface Movement Radar Recordings were also available.

The diagram below shows the layout of the runway sections and taxiways involved. 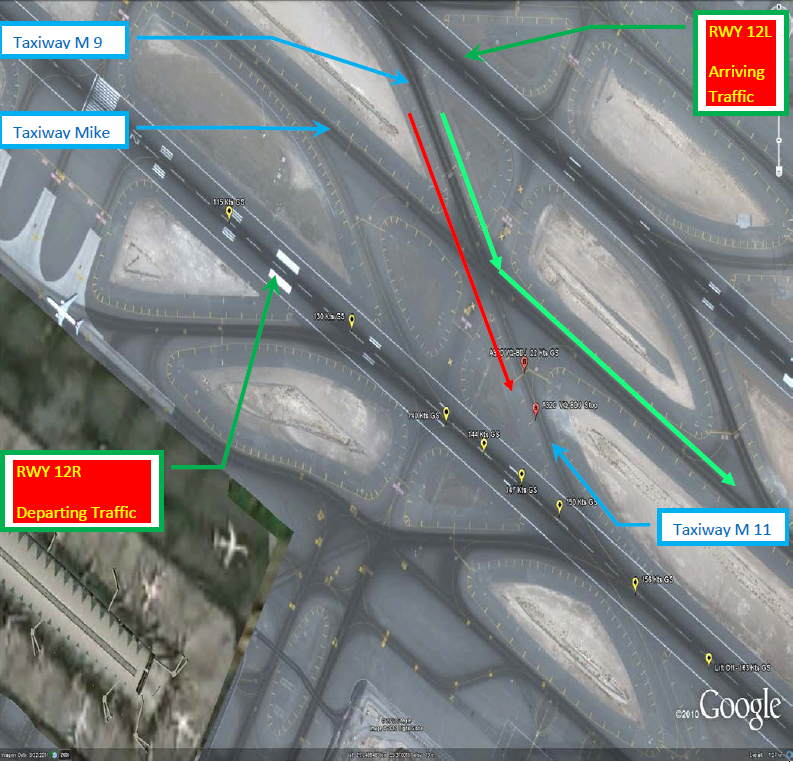 It was established that the arriving A320 had been advised prior to landing to expect an exit from runway 12L onto taxiway M9 and this had been correctly read back. After landing, the runway 12L controller cleared the aircraft to vacate via M9 and turn left onto the central taxiway ‘M’. As the A320 was decelerating, the runway 12R controller - operating on a separate TWR frequency - had issued a take off clearance to the Boeing 777. Shortly after that, the A320 failed to turn left onto ‘M’ and continued straight ahead onto taxiway ‘M11’, crossed the lit red stop bar at a groundspeed of 22 knots and only stopped as the edge of the runway was approaching. Soon after the A320 stopped, the Boeing 777 passed from right to left in front at a groundspeed of over 150 knots with a clearance between the A320 nose and Boeing 777 wingtip estimated at just over 60 metres.

It was apparent that the taxiway layout could be considered conducive to the error made in that the RET from runway 12L led directly across the central taxiway where a left turn should have been made into a similarly aligned access directly onto runway 12R - see the view approaching taxiway ‘M’ taken from the Official Report below. However, the flight crew had still crossed a lit red stop bar in visibility which, although reduced, had not been so low as to be prejudicial to the sighting of runway signs, markings or lighting.

A Preliminary Report: AAIS Case Reference: 06/2012 detailing the facts gathered so far was issued on 3 April 2012. As of 24 March 2022, no further Report on this Investigation had been released