On 21 May 2011, a Monarch Airlines A321 taxiing for departure at Dublin inadvertently taxied onto an active runway after failing to follow its taxi clearance. The incursion was not noticed by ATC but the crew of a Boeing 737 taking off from the same runway did see the other aircraft and initiated a very high speed rejected take off stopping 360 metres from it. The incursion occurred in a complex manoeuvring area to a crew unfamiliar with the airport at a location which was not a designated hot spot. Various mitigations against incursions at this position have since been implemented.

On 21 May 2011, an Airbus A321 being operated by Monarch Airlines on a passenger flight from Dublin to Tenerife failed to follow its correctly acknowledged taxi clearance and, in normal ground visibility and daylight, inadvertently taxied onto the far end of runway 16 from which a Boeing 737-800 being operated by Ryanair on a scheduled passenger flight from Dublin to Vilnius, Lithuania was taking off. The 737 crew saw the incursion and initiated a high speed rejected take of coming to a stop before reaching the other aircraft.

An Investigation was carried out by the Irish AAIU with the relevant data available from both FDRs but only the 737 Cockpit Voice Recorder (CVR) since the A321 had departed immediately after the incursion and the relevant recording had therefore been overwritten.

It was established that the aircraft commander of the A321 had been acting as PF and that although runway 16 was the runway in use, they had needed to use runway 28 for performance requirements. After start, the aircraft had been cleared to taxi from stand 35 on AT4 to hold short of Link 2 (see the diagram below) until another aircraft had completed its landing roll on runway 16 and turned left via taxiways B2 and B1 to parking. The crew had apparently mistakenly thought that the aircraft about to clear runway 16 was on taxiway F2, so when cleared to proceed via taxiways F1 and E1 to hold short of runway 28, they had instead taxied onto ‘A’. The PF stated that as the aircraft approached the edge of runway 16 without them noticing the signage, the holding point markings or the intermittently illuminated runway guard lights whilst taxiing into sun on a wet surface, the First Officer had questioned their position so he had stopped the aircraft, by which time they had begun to enter the runway. It was noted that in accordance with prevailing procedures, the stop bar coincident with the runway 16 holding point on taxiway ‘A’ had not been illuminated since it was only used during LVP. It was considered possible that the fact that the E2 stop bar was illuminated, and would have been visible straight ahead on the other side of RWY 16, may have led the flight crew to assume that they had not yet reached an active runway, even though the runway 16 edge lighting was illuminated. It was also noted that since the A321 had been on the GND frequency, the crew would not have heard the take off clearance being given to the 737 on TWR.

Whilst the taxi routing error had not been noticed by ATC, the imminent incursion was seen by the B737 pilots and when the aircraft commander as PF realised that the taxiing aircraft had entered runway 16, she immediately actioned a rejected take off. The FDR showed that the rejected take off had been commenced at approximately 124 KIAS, just 4 knots below the applicable V1, and that a maximum speed of 134 KIAS had been reached subsequently. The elapsed time from the receipt of take off clearance to the aircraft stopping was approximately 60 seconds. The Investigation noted that the action of the crew had “reflected very positively on the continuous simulator training provided by the operator and carried out by the flight crew.”

In respect of the absence of controller awareness of the taxi error by the A321 it was apparent that as the visual control room (VCR) was a half mile away from the A321, the latter’s position would have been uncertain when judged visually, especially given the complex taxiway layout in the area where the aircraft was. It was also noted that as taxiway A is very short, so too was the corresponding time available for controller detection of the error. Although it was accepted that reference could have been made to the Advanced Surface Movement Guidance and Control System display had the controller observed something possibly wrong, the level 1 system in place at the time of the event was regarded as merely information to assist the primary visual and procedural methods of control.

The Investigation had inspected taxiway ‘A’ shortly after the occurrence and “noted a number of signs in the area due to the confluence of taxiways A, B2 and E1 and the co-located thresholds of RWY 28 and RWY 34” as well as the fact that the orientation of both Link 2 and taxiway ‘A’ was the same. It was considered that the pavement markings in the area of Link 2 were complex but confirmed that all taxiway markings and signage in this area and in taxiway ‘A’ conformed to the requirements of ICAO Annex 14 Volume I.

The Investigation considered that the taxiway layout in the vicinity of the place where the wrong taxiway had been taken was particularly complex and that there were ways in which it could be simplified which could reduce the chances of future errors. It was considered that for those relatively unfamiliar with the layout of the airport such as the A321 pilots, the lack of any logical progression in taxiway designation in the area where the error was made was conducive to such error. It was noted that the ICAO Runway Incursion Manual states that in such a case there is an argument that standard taxi routes should be developed to minimise the potential for pilot confusion.

It was established that ATC procedures did not provide any instructions or guidance on how to provide service when runway 16 was active and there were also departures from runway 28. It was considered that “this omission was probably due to the infrequency of use of this runway combination”. It was noted that although three runway hot spots were designated, they did not include the access to runway 16 from taxiway ‘A’ and in any case controllers had no procedures or guidance material in respect of hot spots and hot spot charts were not displayed at relevant controller working positions nor were they highlighted on the Automatic Terminal Information Service (ATIS).

It was found that although there had been three events over the previous four years of mistaken entry by aircraft onto taxiway A from Link 2, none of these had been classified as “Serious Incidents” and thereby subject to Annex 13 Investigation

The Investigation noted that ASMGCS Level 2 was undergoing testing at the time of the incursion and became operational three months after the event, with the subsequent addition of RIMCAS and Stop-bar Violation Monitoring (SVM), the latter providing an audio as well as a visual alert when an aircraft or vehicle, whether transponder equipped or not, crosses an active (lit) stop bar - although no prior warning.

Dublin ATC informed the Investigation that, as a consequence of this and the previous runway incursion on the 16 October 2010: B738 / A319, Dublin Ireland, 2010 the following action has been taken:

The Dublin Airport Authority informed the Investigation that, as a consequence of this serious incident, the following measures were implemented during 2012: 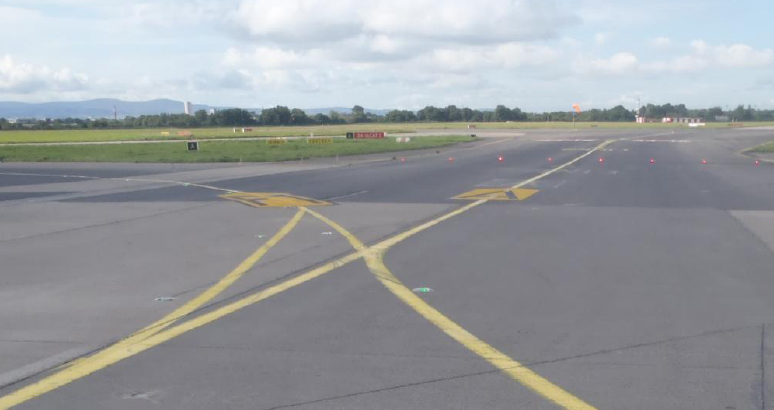 The Investigation concluded that the Probable Cause of the incursion was that “the flight crew of (the A321) lost situational awareness, having misidentified their position, and taxied onto an active runway while another aircraft was taking off. It was further concluded that there had been three Contributory Causes as follows:

The Final Report was approved on 24 October 2012. It was concluded that in accordance with the ICAO Doc 7870 classification scheme for runway incursions, this investigated occurrence had been a Class ‘A’ Runway Incursion i.e. a serious incident in which a collision was narrowly avoided.