On 15 August 2015, an Airbus A321 on approach to Charlotte commenced a go around but following a temporary loss of control as it did so then struck approach and runway lighting and the undershoot area sustaining a tail strike before climbing away. The Investigation noted that the 2.1g impact caused substantial structural damage to the aircraft and attributed the loss of control to a small microburst and the crew’s failure to follow appropriate and recommended risk mitigations despite clear evidence of risk given by the aircraft when it went around and available visually.

On 15 August 2015, an Airbus A321 (N564UW) being operated by American Airlines on a domestic passenger flight from Atlanta to Charlotte as flight 1851 and on short final to runway 36L at destination in day VMC commenced a go around but then struck approach lighting and the paved runway undershot area sustaining a tail strike before climbing away. The flight was subsequently completed without further event but damage to the aircraft was substantial and approach and runway lighting were also damaged. However, none of the 159 occupants were injured.

An Investigation was carried out by the NTSB. Relevant data from the CVR and the FDR were downloaded to inform the Investigation and when it became apparent that a temporary loss of control attributable to meteorological conditions may have been a factor in the event, a comprehensive specialist analysis of the available data in that area was commissioned.

The crew stated that they were on a three-day pairing and the accident flight was the first flight of the second day. It was established that it had proceeded uneventfully until it neared its destination with the aircraft weather radar on for the whole flight and set to automatic mode. An ILS approach to runway 36L was briefed with autobrake at low because of possible water on the runway and using ‘CONF FULL’ (full flap) rather than the usual ‘CONF 3’.

On contacting Charlotte APP at 11,000 feet and reporting that they had ATIS ‘Y’, 36L was confirmed and ATIS ‘U’ advised as current. The crew subsequently acknowledged that a low-level wind shear advisory was in effect for the approach and the Captain reported noting a rain cell close to the airport just after this commenting to the First Officer that this was preventing him seeing the runway. The flight was cleared for the 36L ILS approach about 5 minutes out and soon afterwards, the First Officer was recorded as saying "that thing a really is just like on the approach end isn't it?" to which the Captain responded that the rain shower was "right over the field" but that it had "cleared the right half".

As the aircraft descended through 2,500 feet, the Captain disconnected the AP and called for flaps to ‘CONF FULL’ about 30 seconds later. On transfer to TWR, “the flight was cleared to land on runway 36L following a CRJ ahead of them” and were advised a windshear alert with a 20 knot loss of airspeed on a one mile final and advised that the aircraft ahead had reported a gain of 8-15 knots airspeed at 300 feet. Half a minute later, the CRJ ahead went around and after a further half minute, the A321 entered rain at around 180 feet agl and the auto callout "one hundred" followed about 5 seconds later. Almost immediately, a ‘WINDSHEAR’ aural alert was annunciated and the Captain immediately called "go around, TOGA". Three seconds later, the aircraft hit the ground, recording a 2.6 g impact. The First Officer advised TWR that they were going around and reported “a 20 knot loss of airspeed at about 10 feet”. The flight was subsequently radar vectored for a landing on runway 36C without further event.

A subsequent inspection of the aircraft found that the aft lower fuselage had sustained abrasion damage over an area about 6 metres long by 1½ metres wide which was “concentrated at the frame and stringer locations” with “several punctures of the lower fuselage skin and several fractured or deformed fuselage frames”. The potable water service door was missing and recovered from the undershoot and one of the main landing gear tyres had sustained several cuts and had pieces of metal embedded in it.

Inspection of the impact area found “damage to several lights and evidence of fuselage contact with the paved undershoot surface”. Main landing gear tyre marks began “prior to the last row of High Intensity Approach Lighting System" (HIRL) and there was impact over an area of about 14 metres long by 1 metre wide with blue paint and aluminium metal transfer beginning a little over 9 metres from the runway 36L threshold. Three HIRLs and two REILs (Runway End Identifier Lights) had been sheared off at their bases and in addition to the detached service door, debris from these lights and small pieces of fuselage skin were recovered from the paved runway undershoot and runway 36L surface.

A detailed study of the prevailing weather conditions and the communication to pilots was performed by the Investigation. Prior to departure from Atlanta, the forecast given to the crew included rain showers in the vicinity of the destination around landing time and this was then amended after the flight’s departure to include “a temporary period of thunderstorms and moderate rain around arrival time”.

Recordings from the nearest ground weather surveillance radar to Charlotte was found to show “the rapid development of two defined cells over the approach path and airport” between eight minutes prior to the commencement of the go around and one minute afterwards which, within 15 minutes, had merged into a single larger cell. These cells had no lightning activity associated with them and “a three-dimensional cross section showed bases near 6,000 feet and tops up to 15,000 feet”. The Charlotte Terminal Doppler Weather Radar system which provided ATC with real-time weather information was found to have shown “several small echoes along the flight path and a larger echo above the runway 36L TDZ from five minutes before the commencement of the go around and one minute afterwards”. This encounter with a short period of rapidly changing wind velocity was considered to be clearly indicative of passage through a “small microburst”.

It was noted that ATC receive information and predictions which include windshear and microbursts integrated from “various weather sensors around the airport” and the corresponding display had, from 20 minutes prior to the commencement of the go around until one minute afterwards, been showing “detected windshear conditions at or in the terminal area”. At the time of the accident, this system “was depicting a 25 knot windshear condition over runway 36L and 36C associated with an area of echoes over the area” and “the ribbon display indicated a windshear alert for arrivals on 36L with an expected 20 knot loss of airspeed at 1 mile final” which was the alert provided to the flight by the APP controller. This ATC system was found to have “detected several microburst conditions around the airport area in the minutes prior to the accident" [but] there were no microburst alerts were active for any of the runways at the time of the accident", the earlier windshear advisory given to the crew having expired. 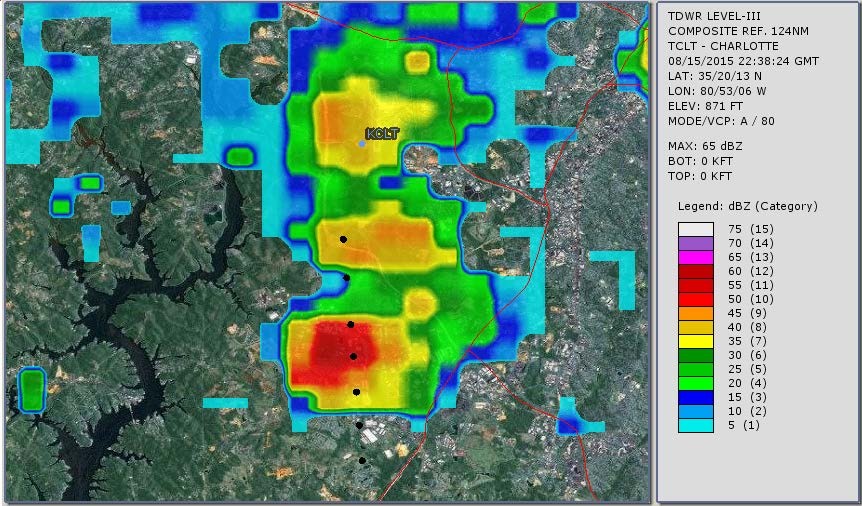 The composite weather radar reflectivity image about 90 seconds after go around began (the black dots indicate the approach flight path). [Reproduced from the Specialist Meteorological Report carried out for the Investigation]

Guidance provided in the parts of the American Airlines QRH applicable to low level windshear classified pilot reports of airspeed changes greater than or equal to 15 knots as representing a high risk actual windshear. The precautions to be considered in the event of this (or even a medium) windshear risk were given in the QRH as using flap 3 rather than full flap and increasing VAPP by up to 15 knots above VREF. In the presence of TWR advice of a windshear alert for a 20 knot loss of airspeed at one mile final and awareness that the CRJ ahead had reported an 8-15 knot airspeed gain at a similar position and then gone around, no such precautionary action was taken by the A321 crew.

The Probable Cause of the accident was determined to be “an encounter with a small microburst on short final at low altitude that resulted in a loss of lift and a tail strike during the go-around”.

A Contributory Factor to the accident was also identified as “the Captain's decision to continue the approach without applying appropriate windshear precautions in accordance with published guidance”.

The Final Report of the Investigation was published on 8 June 2020. Note that the Official Report does not include the ‘Figure 1’ it refers the reader to on page 5. No Safety Recommendations were made.