On 16 July 2016, an Airbus A321’s unstabilised approach at Fuerteventura during pilot line training was not discontinued and takeover of control and commencement of a go-around had occurred just before a very hard runway contact. The subsequent landing was successful but serious damage to the main landing gear was not rectified before the next flight. The Investigation found that the hard touchdown had been recorded as in excess of 3.3g and that the return flight had been “risky and unsafe” after failure of the Captain and maintenance personnel at the Operator to recognise the seriousness of the hard landing.

On 16 July 2016, an Airbus A321 (D-ASTP) being operated by Germania on a scheduled passenger flight from Dusseldorf to Fuerteventura as GMI 3700 made a go around from the runway after a mishandled initial touchdown at destination following an approach in day VMC. The subsequent landing was successful but the aircraft was later found to have made its return flight to Dusseldorf in an unsafe condition due to serious damage caused during the initial abandoned landing attempt and on arrival was grounded for replacement of parts of both main landing gear assemblies.

No information about the event was received by the Spanish Commission for the Investigation of Civil Aviation Accidents and Incidents (CIAIAC) until over six weeks after it had occurred and information on the seriousness of damage to the main landing gear was not received by the CIAIAC until almost four months after the event, at which point the event “was deemed to have been a Serious Incident” and a CIAIAC Investigation was opened.

Prior to CIAIAC awareness of the event and immediately after the decision was made by Germania to ground the aircraft in Düsseldorf so that it could be inspected, the DFDR was removed and sent to Airbus for download in order to “determine the seriousness of the hard landing and specify the inspection actions to be taken to determine the scope of the damage”. These data were eventually made available to the Investigation and showed that the first attempt at landing had involved main gear runway contact at 3.32g at a 1,000 fpm rate of descent. Relevant data on the CVR had been overwritten.

The two concerns of the Investigation once opened were to establish the facts of and context for the hard landing and to focus on the continued operation of an un-airworthy aircraft thereafter.

The unstabilised first approach and go around

It was established that the flight had been cleared for an ILS approach and landing on the 3,406 metre-long runway 01 at Fuerteventura in benign weather conditions - surface wind from 040° at 6 knots, with CAVOK and a surface temperature of 26°C. The aircraft was observed by TWR to go around from the runway and when this was confirmed by the Captain and he was asked for the reason he was reported to have responded that it was because of “de-stabilisation on short final and on final in the landing flight path”. The subsequent visual right hand circuit at 1,500 feet was completed without further event and culminated in a normal landing nine minutes later.

A combination of the DFDR data, the Captain’s statement and information provided by the Operator from their own internal investigation led to the following understanding of the sequence of events during the initial approach:

The illustration below (not scaled) shows the point of the bounce as a vertical line and the change in forward airspeed, vertical speed, pitch and vertical acceleration before and afterwards. 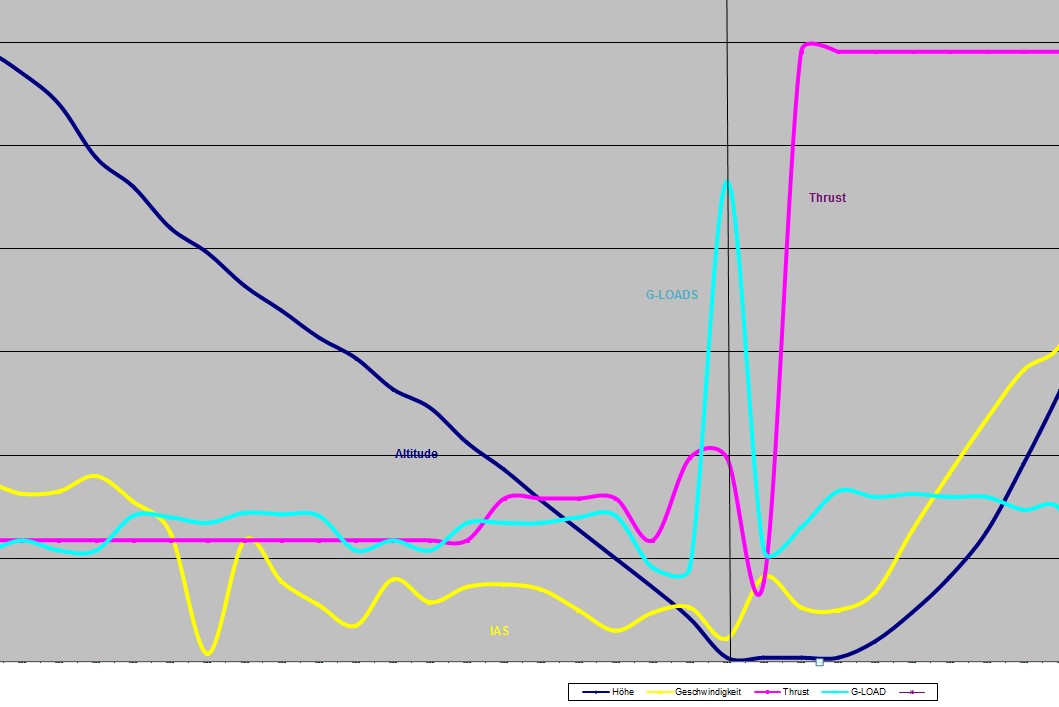 FDR-sourced relative changes in altitude, IAS, thrust and g-load during the hard landing. [Reproduced from the Official Report]

The Investigation noted that after this event, Germania had “acknowledged that its Airbus crews are generally not well trained on manual approaches due to the routine practice of using automatic systems”. As a result of the event, flying manually with manual thrust on visual approaches during line training flights was prohibited pending the formulation of “requirements, conditions and restrictions for flying manually on visual approaches” during such flights. The Company also stated that “new procedures will be defined and proposed for the Flight Manual involving manual flight/manual thrust and work overload when not using automatic systems”.

Damage to the aircraft

When the aircraft was eventually given a proper inspection by engineers, it was found that the damage / load limit exceedances caused by the hard landing were confined to the main landing gear and required, before further flight, replacement of the left main gear assembly and shock absorber and the right main gear shock absorber.

How the aircraft came to depart afterwards when not airworthy

All Airbus A320 family aircraft are fitted with a system which notifies the crew of a hard landing by generating a ‘LOAD 15’ Report. The crew stated that they did not see the ECAM message ‘G LOAD’ which would have been displayed if the excessive load had continued for more than 2 seconds and this corresponded to the fact that the peak load had in this case lasted less than 1 second. The Captain also stated that the ACARS printer did not generate a ‘LOAD 15’ message “which he would have expected” for any excessive loading but that to make sure, he had called the Company Maintenance Operations Centre (MOC) who then checked their computer. They confirmed that they had received one but “could not correctly interpret or decipher it” and could not respond usefully to the Captain’s request for help in finding it in the onboard avionics systems. No local maintenance support was available at Fuertaventura and, after a further call to the MOC in which they did not raise any objection to continued operation of the aircraft, the Captain decided, after conducting a careful external inspection during which he found nothing untoward, that he should fly the aircraft back to Dusseldorf. During this flight, the MOC personnel realised that the ‘Load 15’ Report they had received showed that a peak load well in excess of what was allowable had been registered and that the aircraft would have to be grounded on arrival, which it then was.

The Cause of the Serious Incident was formally stated as “the performance of an unstabilised final approach, resulting from a decrease in airspeed and falling below the glide slope, as well as from the late decision to execute a go-around”.

A Contributory Factor was also identified as “the fact that the manoeuvre was performed without (use being made of) automatic systems to control the airplane’s attitude/flight path or thrust”.

It was also concluded that “the decision made after the event to continue to operate the airplane with passengers was risky and unsafe and resulted from an incorrect assessment of the seriousness of the hard landing”.

The Final Report was approved on 28 June 2017 and subsequently made available in English translation.