On 16 April 2013, an A321 sustained significant damage during a tail strike during a bounced landing which followed loss of airspeed and an increase in sink rate shortly before touchdown after an otherwise stabilised approach. The Investigation attributed the tail strike to a failure to follow the recommended bounced landing response and noted the inadequate training provided by Asiana for bounced landing recovery.

On 16 April 2013, an Airbus A321 (HL7730) being operated by Asiana on a scheduled passenger flight from Harbin, China to Seoul Incheon as OZ 340 was damaged during a misjudged landing off a day Instrument Landing System (ILS) Category 1 approach at destination which was completed in Visual Meteorological Conditions (VMC). Three cabin attendants sustained minor injuries and ground impact caused substantial damage to the aircraft pressure bulkhead and stringers as well as superficial damage to the exterior skin of the rear fuselage.

An Investigation was carried out by the Korean Aviation and Railway Accident Investigation Board. Recorded data from the Flight Data Recorder (FDR) and Cockpit Voice Recorder (CVR) were successfully downloaded and recorded data from the ASDE showed when the aircraft crossed the landing runway (16) threshold and where and when the aircraft made its initial and second touchdowns and subsequently cleared the runway.

It was established that the 46 year old aircraft commander had accumulated 722 hours in command of the A321 after promotion to Captain just over a year earlier. The 32 year old First Officer had recently joined the airline and had 383 total flying hours including 33 hours accumulated since appointment as an A321 First Officer two weeks prior to the accident.

It was established that the commander had taken over as PF upon being informed by ATC that the cloudbase was 200 feet aal just over two minutes before touchdown. Prior to this, the First Officer had been flying the aircraft manually during descent to gain familiarity with the PFD. The A/T was disconnected about 3.5nm from touchdown passing 1200 feet aal but the PF made no callout. The aircraft was stabilised as required at the 1000 feet 'gate' and remained so until the aircraft descended below 100 feet aal when airspeed began to drop below the declared VApp and an excessive sink rate developed without any callout by the PM. The PF increased the thrust to compensate but the aircraft still touched down hard (almost 2g vertical acceleration was recorded) just 155 metres from the threshold of the 4000 metre runway. Touchdown pitch attitude was recorded as 6.7º and during the following 5 second bounce, it increased further to reach 9.8º before peaking at 10.9º at the second touchdown which occurred 491 metres from the threshold. The progress of the aircraft as depicted on and recorded by the ASDE is reproduced below. 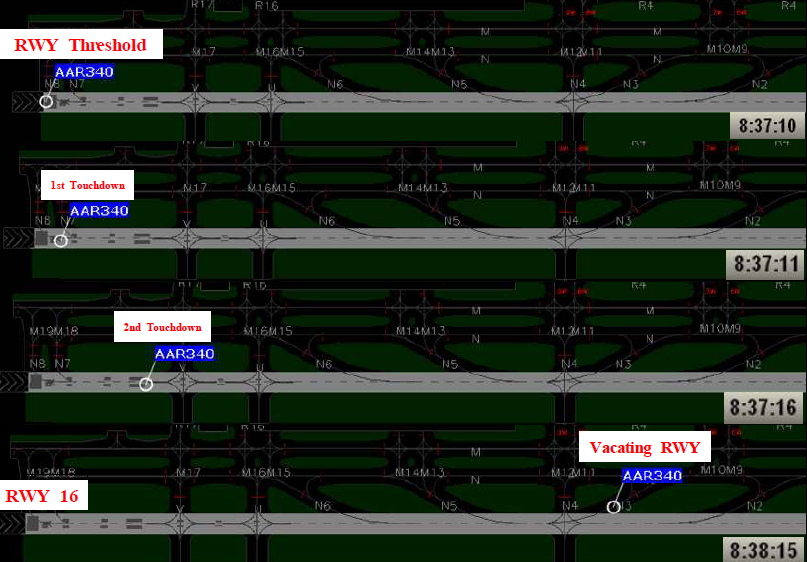 It was noted that the PF, like all other Asiana pilots, had learned about bounce recovery techniques during a ground school course but had never been trained in the simulator to demonstrate proficiency in bounce recovery, which requires that pitch attitude should not be increased and thrust should be kept at idle.

After the accident, a simulator was used by the Investigation to see how an experienced Asiana Captain responded to a bounce and it was found that a tail strike occurred. It was considered that this indicated that "theoretical learning in the ground school course alone cannot allow the flight crew to make a safe touchdown after actual bouncing" and that such practical experience should be added to simulator training - with the ground impact recognition function disengaged.

The Investigation noted from the CVR recording that no approach briefing was given and that on a number of occasions throughout descent and approach, both pilots failed to make standard callouts and responses.

The formally documented determination of Causes of the investigated accident were as follows:

It was further determined that there were six Contributory Factors:

(1) the inadequacy of the pilot training program dealing with the recovery form the bounce;

(2) lack of pre-landing preparation due to a failure to conduct an approach briefing on pitch attitude;

(3) the failure of the PF to properly allocate his attention due to his delegation of flight control to the pilot monitoring (PM) who failed to meet flight control requirements;

(4) the inadequate advice and monitoring from the PM due to the failure of the PF to make standard callouts;

(5) the disconnection of the autothrottle and a failure to manually control thrust and speed;

(6) a failure to execute a go-around when stabilised approach criteria are not met.

Six Safety Recommendations were made a result of the Investigation:

The Final Report was completed in September 2014 and published in English translation on 22 January 2015.