On 5 August 2019, an Airbus A321 crew declared a MAYDAY immediately after clearing the landing runway at Valencia when a hold smoke warning was annunciated. An emergency evacuation was completed without injuries. This warning followed “white smoke” from the air conditioning system entering both the passenger cabin and flight deck in the four minutes before landing which had prompted the pilots to don oxygen masks. The Investigation found the white smoke was the direct consequence of an oil leak from the right engine as a result of the misalignment and breakage of a bearing and its associated hydraulic seal.

On 5 August 2019, an Airbus A321 (G-MEDN) being operated by British Airways on a scheduled international passenger flight from London Heathrow to Valencia as BA422 was en route in day VMC when two annunciations of minor malfunctions in the right engine occurred, one of which was transient and the other required no action. Subsequently, a few minutes before landing at the destination, white smoke of undetermined origin began entering the passenger cabin and flight deck and oxygen masks were donned. Immediately after clearing the runway, a MAYDAY was declared after several system warnings potentially linked to the smoke were annunciated. There were no externally visible signs of fire but an emergency evacuation of all 183 occupants was promptly completed without any injuries.

An Investigation was carried out by the Spanish Commission for the Investigation of Accidents and Incidents (CIAIAC). Relevant FDR and CVR information from the aircraft was available as a result of the flight crew electrically isolating them after the event. Relevant recorded ATC data were also available.

The flight from London proceeded normally until just over an hour after takeoff by which time the aircraft was in the cruise at FL350 over the Pyrenees. At that point, an ECAM ‘ENG 2 STALL’ caution was annunciated but resolved itself automatically. Nevertheless, the crew performed the QRH ‘ENG STALL’ procedure and activated the right engine and wing anti-ice systems. Whilst this was being done, the cabin crew reported that they had just heard a noise and that at the same time a “slight mist” had momentarily formed in the passenger cabin before disappearing. A couple of minutes later, an ECAM ‘ENG 2 OIL FILTER CLOG’ information only caution appeared.

In the absence of any ongoing or further abnormalities, it was decided to continue the flight as planned and two minutes later descent to destination was commenced and the Captain, who had up to then been acting as PF, passed control to the First Officer so that he could focus on monitoring the performance of the right engine. No further anomalies were detected during this descent and after a further 26 minutes and following the routine instruction, the cabin crew subsequently reported “cabin secure” to the flight crew. Shortly after this, Valencia APP cleared the flight for an ILS ‘Z’ approach to runway 12.

Three minutes later, as the aircraft was at 6,000 feet QNH on the approach, white smoke suddenly began to enter both the flight deck and the passenger cabin. Both pilots donned their oxygen masks. ECAM Alerts were then annunciated within just two minutes in the order ‘LAVATORY SMOKE’, ‘AVIONICS SMOKE’ and
‘AFT CARGO SMOKE’. The flight crew responded by taking the immediate actions listed in the QRH Checklist ‘SMOKE / FUMES / AVNCS SMOKE’. In the passenger cabin, the Purser instructed the other cabin crew members to put on their smoke hoods and instructed the passengers to “keep their heads down”. As this was happening, the flight was cleared to land on runway 12 and did so less than two minutes later, exiting onto the H4 RET. ATC were not informed of smoke.

Almost immediately after touchdown, ECAM Warnings of ‘ENG 2 OIL LO PR’, ‘FWD CARGO SMOKE’ and ‘ENG 2 OIL FILTER CLOG’ were annunciated. The aircraft was stopped on the RET and a ‘MAYDAY’ call was made requesting the immediate attendance of the airport RFFS. The Captain made the company standard on-ground readiness PA ‘ATTENTION CREW AT STATIONS’ and after opening the flight deck windows, which rapidly dispersed the smoke on the flight deck, the crew began to action the received ECAM messages.

Whilst this was in progress, two of the cabin crew wearing smoke hoods entered the flight deck and, with the door open, the pilots could see that visibility in the cabin was “significantly reduced”. The TWR controller was asked to advise if there was any external evidence of fire at the aircraft and, after consulting with the RFFS crew who had reached the aircraft, reported that there was no external evidence of fire. On completion of the ECAM Alert actions the Captain decided to evacuate the aircraft.

This was accomplished using 6 of the 8 emergency exits with no injuries and buses were on hand to take everyone to the terminal where those who had been affected by smoke inhalation were provided with first aid. Three of these passengers (one adult and two children) were then taken to a local hospital and checked over before being discharged.

Damage to the right engine was internal but various evidence of the consequences of its malfunctioning were visible externally including oil leaking directly from it and the slats on the right wing leaking oil from the engine bleed air ducts used to supply the wing anti-ice system. The chip detectors accessible by opening the right engine cowlings were found to be completely filled with ferrous debris. An initial boroscope inspection of the engine also found significant amounts of engine oil in the third stage of the High Pressure Compressor (HPC).

The right IAE V2533-A5 engine was disassembled and sent to the manufacturer's facilities to undergo a thorough inspection. This found that the (eventual) complete loss of its oil which had been the source of contamination of the air conditioning system had been triggered by the failure of bearing number 3 in the (sealed) Front Bearing Compartment (FBC). In conjunction with the engine’s number 4 bearing, this bearing supports the high pressure rotor. It was not possible to determine when this bearing had begun to deteriorate but it was concluded that it could not be traced to any airworthiness-related non compliance. It was concluded that the bearing’s operating time/cycles, material, manufacture or assembly, “did not appear to have contributed to the failure”. The likely origin of the failure was considered to have been damage to the number 3 bearing due to rolling contact fatigue which had begun when spalling occurred between the outer race and the bearing balls. This had then caused wear as a result of frictional contact between the outer race and the bearing housing as a result of which the outer race then began to crack with parts released from it then damaging the bearing cage. The ‘ENG2 STALL’ message would have occurred when the damaged bearing was no longer able to control either the axial or radial position of the rotor. Although the engine “had recovered from this stall”, metallic debris from the breakup of the bearing resulted in the oil filter becoming clogged thereby activating the ‘ENG 2 OIL FILTER CLOG’ message.

Only in the final stages of the flight, when the turning shaft lost its alignment had the hydraulic seal evidently fractured and allowed air from HPC to enter the FBC and oil to leak through the seal into the HPC. Although much of this oil would have passed through the engine, some would have been bled from the HPC into both the cabin air and anti-ice systems. 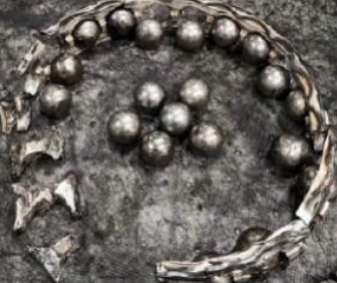 Damage to bearing No. 3 [from official report]

The response of the flight crew to what turned out to be the early signs of the bearing problem was considered procedurally correct with the situation initially kept under control with all indications normal. There was nothing to suggest that the number 3 bearing would completely fail only 30 minutes after ENG 2 OIL FILTER CLOG’ message had appeared.

Their subsequent response to the multiple Warnings/Alerts activated at 6000 feet on approach was, to the extent time was available, in line with FCOM guidance which advised that “multiple smoke-related ECAM alerts (lavatories, avionics and cargo hold) may indicate that the smoke is coming from the air conditioning system.” This guidance also noted that an engine failure “can cause smoke to enter the flight deck and passenger cabin through the engine's bleed air system, in which case the smoke will re-circulate through the aircraft until it disappears from the air conditioning system”.

The Investigation was appraised of the findings of British Airways internal investigation which identified opportunities for improved crew communication in circumstances such as those which had prevailed including:

The Cause of the event was formally recorded as the misalignment and breakage of bearing number 3 (and its hydraulic seal) in engine number 2. This resulted in the bleed air from engine number 2 becoming contaminated with engine oil, which, in turn, caused smoke to enter the passenger cabin and the presence of oil in the anti-ice system.

The Final Report of the Investigation was approved on 23 February 2022 and simultaneously published in both English translation and in the definitive Spanish language version the following month. No Safety Recommendations were made.