On 28 July 2010, the crew of an Airbus A321 lost contact with the runway at Islamabad during a visual circling approach and continued in IMC outside the protected area and flying into terrain after repeatedly ignoring EGPWS Terrain Alerts and PULL UP Warnings. The Investigation concluded that the Captain had pre-planned a non-standard circuit which had been continued into IMC and had then failed to maintain situational awareness, control the aircraft through correct FMU inputs or respond to multiple EGPWS Warnings. The inexperienced First Officer appeared unwilling to take control in the absence of corrective action by the Captain.

On 28 July 2010, an Airbus AIRBUS A-321 (AP-BJB) being operated by Air Blue on a scheduled domestic flight from Karachi to Islamabad as ABQ 202 failed to complete a daytime visual circling approach at destination after entering Instrument Meteorological Conditions (IMC). The wreckage of the aircraft, which had been destroyed by the impact and subject to a post crash fire, was subsequently found approximately 10 nm from the aerodrome in the Margalla Hills. The aircraft had been destroyed by the impact and all 152 occupants fatally injured.

An Investigation was carried out by the Safety Investigation Board (SIB) of the Pakistan CAA. The SSFDR and 2 hour SSCVR were recovered and their data, which in both cases covered the whole of the accident flight were successfully downloaded to assist the Investigation.

It was found that soon after departure from Karachi, the Captain, who was PF, had begun testing the knowledge of First Officer using "harsh words and a snobbish tone" and that this, along with lecturing and the giving of advice had continued intermittently for about an hour in a way which was considered to have been "humiliating". As a result, the First Officer "generally remained quiet, became under confident, submissive and subsequently did not challenge the Captain for any of his errors, breaches and violations".

Whilst the aircraft was en route, the reported weather at Islamabad remained largely unchanged but there were some minor changes. The surface wind remained from 050º at a mean speed of 16 knots, the prevailing visibility improved from 1500 metres to 3500 metres, the lowest cloud consisting of 3 oktas of Stratus lowered from 1500 feet aal to 1000 feet aal whilst other cloud cover was unchanged - 4 oktas of Stratocumulus and 1 okta of Towering Cumulus at 3000 feet and 7 oktas of Altocumulus/Altostratus at 10,000 feet aal. A weather warning for Thunderstorm with rain also remained current.

The crew were advised that Runway 12 was in use and understood that this meant an ILS approach to Runway 30 followed by a break right to fly a visual circling approach in what could well be marginal conditions at not less than 2510 feet Altimeter Pressure Settings (842 feet aal). They were aware that one of the two aircraft ahead had completed the approach to a landing but the other had diverted. Whilst still en route, the Captain instructed the First Officer to set up a non standard flight plan in the FMS using waypoints which, if followed, would have led to the aircraft flying a wide circuit before turning inbound to establish on finals at 5nm.

As the aircraft turned right over the threshold of runway 30 just past the VOR after delayed visual acquisition of the runway from the ILS, the Captain ignored the TWR controllers recommendation, because of the poor weather, for a 'Low Visibility Circling Approach' which would have put the aircraft on left downwind at no more than 1.3 nm from the runway. He appeared to have decided to use the flight plan track set up earlier (and not known to ATC) flying through the AP in 'managed mode'. Then, after violating the MDA by descending to 2300 feet QNH, the Captain appeared to encounter a series of difficulties in managing the flight path through FCU inputs and, as the aircraft continued north without properly establishing downwind, 2.5 minutes after breaking right, the first Terrain Avoidance and Warning System (TAWS) 'TERRAIN AHEAD' Caution was activated. The First Officer sought to get a left turn made but no action was taken and two more of the same Caution were activated in quick succession 15 seconds later. On query from ATC as to whether they were visual with the airfield or (just) the ground, the crew responded "with the ground" but did not seek radar assistance. Further mismanagement of the HDG selector by the Captain resulted in a turn to the right instead of the left whilst getting further and further to the north-north-east of the runway 12 threshold - and he appeared not to understand what he was doing wrong.

After a further 15 seconds and with 40 seconds to go till impact, the first of a continuing series of EGPWS 'TERRAIN AHEAD PULL UP’ Warnings was activated as the aircraft began to turn away from the airfield towards the Margalla Hills - but no clear response followed. Altitude varied a little but the EGPWS predictive Warnings continued until 7 seconds before impact. There were then two successive reactive PULL UP Warnings and shortly afterwards, the aircraft struck terrain at 2858 feet amsl some 9.6 nm north-north-west of the VOR. The final minutes of the flight are illustrated below. 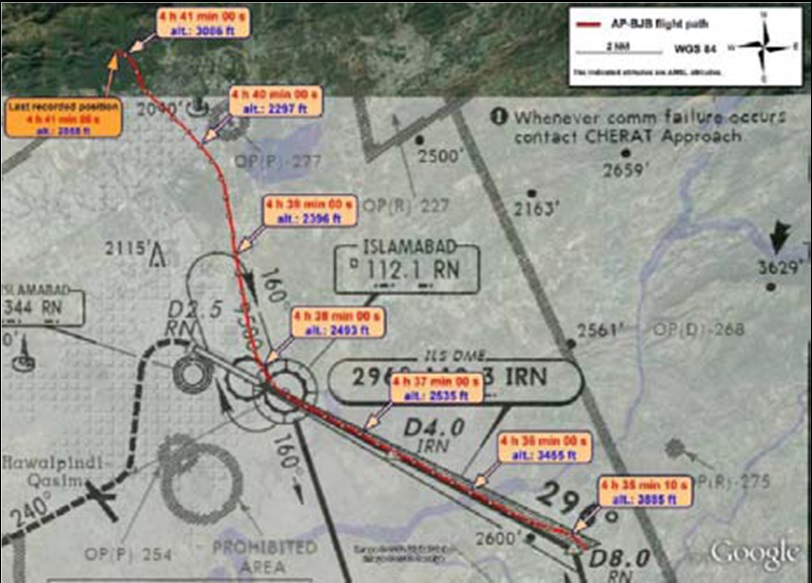 It was found that the impact point was close to one of the waypoints on the non standard flight plan inserted into the FMS earlier by the crew. The track actually flown by the aircraft was found to have taken it 7.3 nm from the Runway 12 threshold, 3 nm beyond the designated protected area for a circling approach. Over a period of 70 seconds prior to impact, there were 5 Terrain Ahead Cautions, 13 Terrain Ahead PULL UP Warnings, one reactive Terrain Caution and the final two reactive PULL UP Warnings. Noting that the First Officer had appeared to be fully aware of the importance of acting on the EGPWS Alerts, the Investigation concluded that he had "simply remained a passive bystander in the cockpit and did not participate as an effective team member, failing to supplement / compliment or correct the errors of his Captain assertively in line with the teachings of CRM due to the Captain’s behaviour (earlier) in the flight".

The Formal statement of Cause was recorded as:

A case of Controlled Flight into Terrain (CFIT), in which aircrew failed to display superior judgment and professional skills in a self created unsafe environment. In their pursuit to land in inclement weather, they committed serious violations of procedures and breaches of flying discipline, which put the aircraft in an unsafe condition over dangerous terrain at low altitude.

A total of fifteen Safety Recommendations were made as a result of the Investigation as follows:

The Final Report was published by the Pakistan CAA in November 2011.