On 20 September 2013, a loss of separation occurred between two en route Airbus A330s under radar surveillance in controlled airspace near Adelaide. The potential conflict was resolved with TCAS RA action by one of the aircraft involved but the TCAS equipment on board the other aircraft appeared to have malfunctioned and did not display any traffic information or generate an RA. The complex pattern of air routes in the vicinity of the event was identified by the Investigation as a Safety Issue requiring resolution by the ANSP and the response subsequently received was assessed as satisfactory.

On 20 September 2013, prescribed separation under radar control was lost just west of Adelaide in day Visual Meteorological Conditions (VMC) between two opposite direction Airbus A330-200s, both operated by Qantas, one (VH-EBO) operating a scheduled domestic passenger flight from Sydney to Perth and the other (VH-EBS) operating a scheduled domestic passenger flight from Perth to Sydney which were both in the cruise. One of the aircraft received and followed a TCAS RA. Minimum vertical separation was 650 feet when 4.1nm apart laterally followed by a minimum lateral separation of 1.6nm with 870 feet vertical separation. 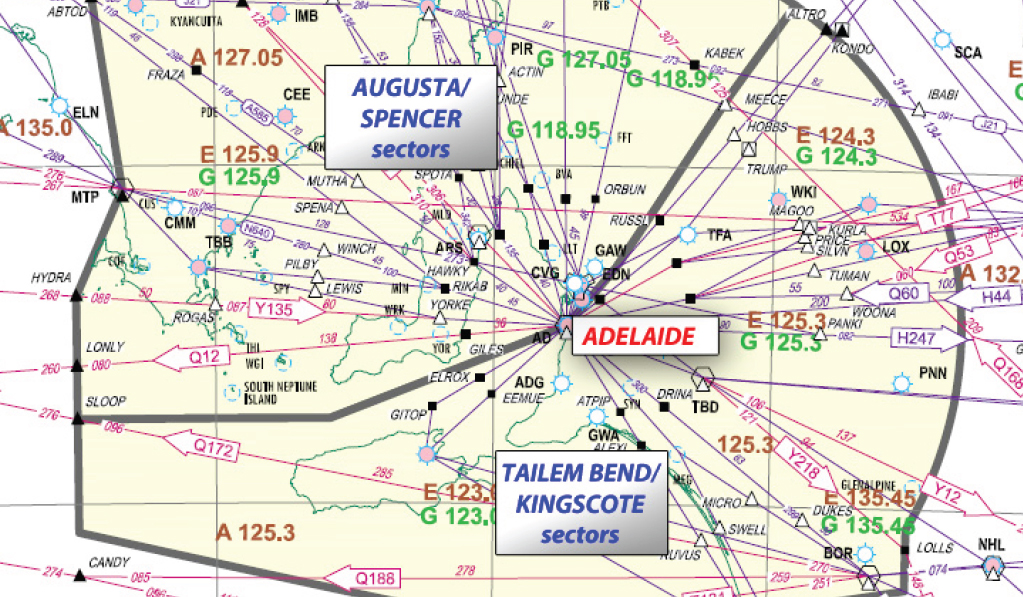 An Investigation was carried out by the ATSB. Recorded flight data was retrieved from both aircraft and from the ATS Unit involved. It was noted (see the diagram below) that the ATS Unit concerned was the Melbourne ACC. It was found that the controller in the position responsible for the location where the conflict subsequently occurred had recently added the permanently combined Tailem Bend (TLM) / Kingscote (KSC) sectors to his original area of responsibility, the permanently combined Augusta (AUG) and Spencer (SPN) sectors. At this point he had only just taken over after a period monitoring another controller who was on a familiarisation shift on the TLM/KSC sectors. Low traffic levels were noted to have prevailed in all four sectors. 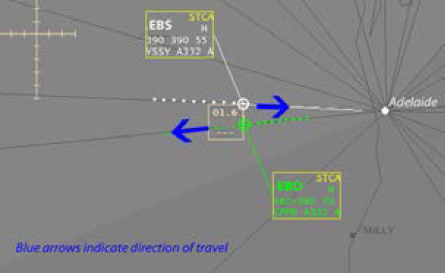 It was established that when just to the west of Adelaide on the one-way air route Q12 at FL380, the westbound A330 requested climb to FL 400, their optimum cruising level, at 1212:57 whilst in the AUG/SPN combined sector. At this point, the controller had their display off-centred to the right whilst assessing pending traffic to the east. On receiving the request, the controller immediately returned their display to the default setting and, a few seconds later, issued the requested clearance, updated the cleared flight level on the aircraft label and re-designated the aircraft track. This action set up a potential conflict because there was no assurance that the prescribed 1000 feet vertical separation would exist when the aircraft passed at a point where there could be less than the required 5nm lateral separation.

At the time the climb request for the westbound aircraft was approved, the potentially conflicting eastbound A330 was further west of Adelaide and eastbound on the two-way route J15 in between waypoint YORKE and Adelaide.

The crew of the eastbound A330 later reported that they had noticed opposite direction traffic on their Airborne Collision Avoidance System (ACAS) display when they were about 40 nm from it and had heard a flight crew on frequency request and receive a clearance to climb to FL 400. However, they had considered that it could not be the aircraft on their TCAS display since it was too close to them.

17 seconds after the westbound aircraft commenced climb from FL380, the controller acknowledged an Short Term Conflict Alert (STCA) between the two aircraft, subsequently reporting that they had "instantly recognised" the reason for the alert. The STCA was configured to provide an alert before prescribed separation had been lost. The controller responded by instructing the climbing aircraft to "maintain FL 380", to which the response was that the aircraft was descending back to that level. Recorded data from the aircraft showed that it had climbed 350 feet before beginning to descend back to FL380. The crew subsequently reported that they had not seen the other aircraft on their TCAS display and had not received either a TA or an RA in respect of it.

Meanwhile, the crew of the eastbound aircraft, who had already observed the westbound aircraft EBO climbing and diverging to the south on their TCAS display, received a TCAS TA followed (12 seconds after the STCA activation) by a TCAS 'CLIMB' RA. The traffic was then sighted visually and, after 'Clear of Conflict' had been annunciated, the aircraft was returned to FL390.

The Investigation found that the controller involved had qualified eight years previously and all their subsequent experience had been gained in the sub group of Melbourne ACC which included the sectors he was working on the day of the incident. It was noted that he changed to part time "in recent years".

It was found that the MATS safety alerting section current at the time of the occurrence did not contain any explicit provision which would enable controllers to abbreviate safety alert and traffic avoidance advice phraseologies as a means to ensure timely provision of advice, but that it did contain a general provision allowing controllers to "exercise their best judgement and initiative when the safety of an aircraft may be considered in doubt".

The apparent failure of the TCAS equipment on the westbound aircraft was reviewed. Data from the aircraft Quick Access Recorder confirmed that no TA or RA had been recorded in respect of the investigated incident. The crew also advised that they had "not been able to see other aircraft on their TCAS display during the rest of their flight in situations where the other aircraft’s crews could see them" until reaching the Perth TMA where traffic returns became evident. They reported that they "had been able to see other aircraft on departure from Sydney" and that there had been no annunciation of a TCAS malfunction thereafter. After arrival at Perth, function of the TCAS system BITE did not produce any fault indication

Subsequently, a full system test was conducted in Sydney and a failure was identified between Transponder 2 and the TCAS computer and directional antennas. These two components were replaced and a function test confirmed that there was no longer any malfunction. The removed TCAS computer and Transponder 2 (both manufactured by ACSS and having respective P/N 7517900-10012 and 7517800-10100) were sent to the manufacturer in the US for testing in accordance with a test plan agreed to by the participants in the Investigation. The testing did not identify "any incorrect or anomalous findings" and analysis of the TCAS computer’s event log did not show any RAs or TAs corresponding to the incident, although it did record the ground testing performed after the incident. The analysis of the fault log from the transponder unit did not show any faults recorded at the time of the incident. The equipment manufacturer concluded that the malfunction had been "a unique event" and stated that they were not aware of any other such events.

The context for the controller's error was considered but no issues with traffic load, time pressure, distraction or fatigue were identified. It was noted that when responding to the STCA activation which had alerted them to the consequences of their issue of a climb clearance, the controller had not followed standard practice in respect of "compromised separation recovery" despite having received routine recurrent training in this area within the previous 12 months. However, it was considered that "the controller’s response to the conflict alert was very prompt and it was effective in resolving the traffic conflict and re-establishing vertical separation". It was also considered that the controller’s decision to abbreviate the normal phraseology was "appropriate with respect to time limitations and their assessment that the tracks of the aircraft were diverging at that time".

The formally-recorded Findings of the Investigation were as follows:

A Contributing Factor was that:

It was also concluded that there had been two other factors that increased risk:

One Other Finding was also formally recorded:

Safety Action taken by ANSP Airservices Australia in respect of the identified Safety Issue was notified to the ATSB on 1 September 2014 as follows:

The Airservices SkySafe Taskforce - Airspace Stream is reviewing air routes in respect to the following criteria:

The Taskforce is undertaking a review of the Australian airspace design that contributes to risk. Due to a legacy design feature requiring air routes to be from Navigation Aid to Navigation Aid, the Taskforce is considering that with the advent of GPS and improved aircraft navigation capability the need to track via Navigation Aids may no longer remain in many cases.

In a further notification on 12 February 2015, Airservices advised:

"Furthermore Airservices confirms that the initiatives identified as part of the Operation SkySafe Taskforce are on-going. Airservices has commenced a holistic review of the air route network to address the safety issue identified in the report; to consider the impact and opportunities arising from the ADS-B and GNSS mandates; and the capabilities that may be delivered with the new oneSKY air traffic management system."

In the light of this information, the ATSB determined that it was satisfied that the safety action undertaken, and action in progress, would satisfactorily address the subject Safety Issue.

The Final Report was published on 5 March 2015. No Safety Recommendations were issued.