On 31 March 2012, after the implementation of contingency ATC procedures for a period of 5 hours due to controller shortage, two Garuda A330 aircraft which had been transiting an associated Temporary Restricted Area (TRA) prior to re-entering controlled airspace were separately involved in losses of separation assurance, one when unexpectedly entering adjacent airspace from the TRA, the other when the TRA ceased and controlled airspace was restored. The Investigation did not find that any actual loss of separation had occurred but identified four Safety Issues in relation to the inadequate handling of the TRA activation by ANSP Airservices Australia.

An Investigation was carried out by the Australian Transport Safety Bureau (ATSB).

It was noted that the basis for the determination that a Serious Incident had occurred was that two aircraft had operated in controlled airspace without ATC awareness because of issues related to the temporary implementation of TIBA procedures in a TRA when the provision of normally mainly procedural ATC service in an area of upper airspace controlled from Brisbane ACC could not be maintained. An overview of the airspace involved is shown below: 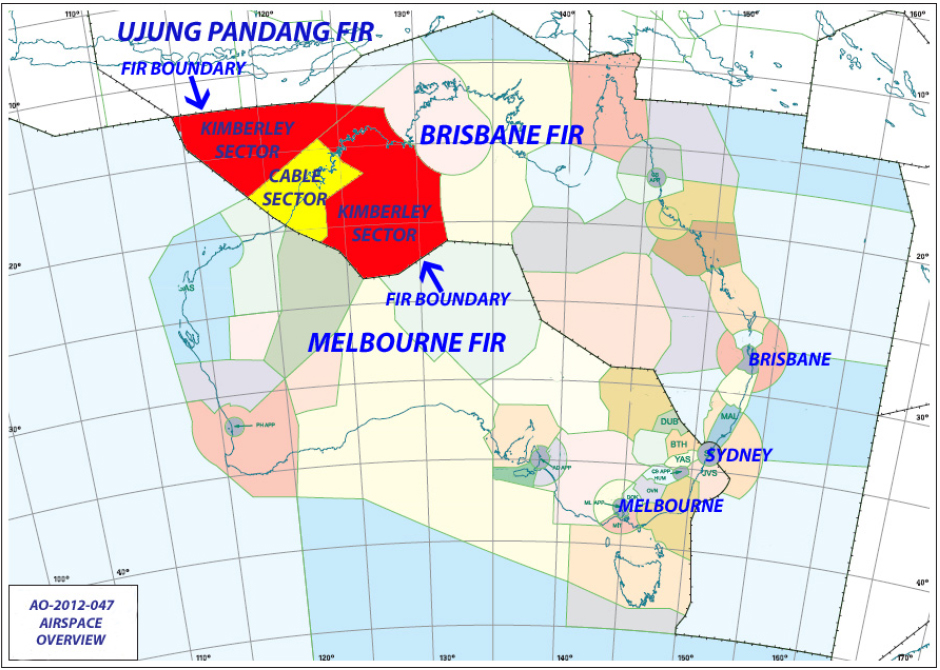 It was established that on the evening of 30 March 2012, the two controllers who had been rostered to man the combined Kimberley (KIY) and Cable (CBL) sectors from 2300 that day until 0615 on 31 March had both called in at short notice to advise that they "were unable to attend for their shift". In both cases this notification was described as for "a legitimate personal reason". No replacements could be found, although it was possible to cover the beginning and end of this shift period by obtaining agreements from controllers on the shifts prior to and following the un-covered period to respectively slightly extend / begin earlier their duty periods. Contingency plans to designate a TRA which would temporarily withdraw ATS and substitute TIBA procedures between 0015 and 1615 local time (EST) on 31 March were activated and a NOTAM was issued to advise of these arrangements. The necessary regulatory approval was also obtained.

Whilst the TRA was in place, the console for the affected sectors was monitored by an upper airspace line manager at the Brisbane ACC who was designated as the Contingency Response Manager (CRM).

A Garuda Airbus A330-300 (PK-GPA) departed from Bali (Denpasar) at 0237 EST on a scheduled passenger flight to Melbourne and climbed to its flight planned cruise level of FL 370. The crew were aware of the Notice To Airmen and the en route airspace where TIBA procedures would be required. The TRA was entered at approximately 0310 EST without ATC being aware. The flight crew stated subsequently that during the flight through the TRA, they had conducted all-stations broadcasts on frequency 128.95 as required.

However, they had not made a position report to ATC on the next (Melbourne ACC) 15 minutes prior to leaving the TRA in order to obtain a clearance before entering the controlled airspace which bordered the TRA, which was required as part of the notified TIBA procedures and only reported doing so concurrently with leaving the TRA and re-entering controlled airspace at 0500 EST. Consequently, the controller responsible for the airspace involved was unaware of it and a Loss of Separation Assurance (LOSA) occurred.

A second Garuda Airbus A330, a -200 series, (PK-GPO) departed Bali (Denpasar) at 0405 EST on a scheduled passenger flight to Sydney and climbed to its flight planned cruise level of FL 390. Its crew were also aware of the NOTAM and the en route airspace where TIBA procedures would be required. The TRA was entered at approximately 0444 EST, again without ATC being aware. The flight crew stated subsequently that during the flight through the TRA, they had conducted all-stations broadcasts on the specified frequency in accordance with the requirements of the NOTAM. At 0515 EST, whilst this aircraft was still in the TRA, it ceased and controlled airspace and normal ATS was reinstated. The Brisbane ACC controller covering the KIY/CBL sectors was unaware of its presence and so the aircraft was operating in controlled airspace without the knowledge of ATC or being in receipt of the necessary clearance and a second LOSA had therefore occurred.

The crew of this aircraft reported that at 0520 EST, they had attempted to establish contact with ATC on the frequency they believed they had been given earlier by a Flight Watch International HF operator as the one for Brisbane ACC but received no reply. This frequency was the normal one for their route but was inapplicable with the TRA and TIBA in place. It was in any case read back incorrectly and the incorrect readback was not detected by the HF operator. The Captain stated that they "thought TIBA procedures were still applicable at that time, so they did not consider it unusual to have received no response from ATC". At that stage the aircraft was still over 80 minutes away from reaching the boundary between the Brisbane and Melbourne ACC sectors. When the Brisbane KIY/CBL sector controller handed over to a colleague at 0556 EST, the incoming controller noticed that the flight progress strip for PK-GPO included an ATD from Bali and the aircraft could therefore be operating in sector airspace at that time. The incoming controller processed the corresponding Flight Data Record in accordance with normal procedures and this resulted in the flight's flight plan track, aircraft call sign and flight planned level attached as a label appearing on the controller’s air situation display. This confirmed the likely presence of the aircraft and so at 0600, the controller made a blind broadcast to the flight. However, as the crew were still listening on an incorrect frequency, there was no response.

At 0620 EST, a Melbourne ACC controller for the adjoining southern airspace sectors contacted the Brisbane KIY/CBL sector controller and queried if anyone had been monitoring the TRA whilst it was during the activation period as the crew of the previous Garuda A330 ( PK-GPA) had called unannounced at the FIR boundary and received the response that "they were not sure but thought that there had been someone at the console".

Twenty minutes later, as PK-GPO left Brisbane ACC airspace at FL390, its crew called Melbourne ACC for clearance without having made the position report which would have been required 15 minutes prior to exiting the TRA they believed they were still in. Unaware of the aircraft location, the controller asked its position and then, in order to assure vertical separation against another aircraft, asked the latter to climb from FL 390 to FL 400. There was no loss of prescribed separation and the LOSA situation was resolved.

The Findings of the Investigation were as follows:

Two losses of separation assurance in controlled airspace had occurred:

Overall, it was concluded that although ANSP Airservices Australia "had many risk controls in place to manage the situation where it was unable to provide the published air traffic services (ATS) and had to activate a TRA, in this case, a TRA had to be activated at short notice in airspace adjacent to an international ATS provider and a range of actions by operational personnel did not conform to expectations." More specifically "Airservices’ risk controls were not robust enough to effectively manage this situation and ensure they would be made aware of all aircraft that were operating within the TRA (and) a number of procedures and processes were not fulfilled on the night of the occurrence."

A total of 10 Contributing Factors were identified as follows, three of which were classified as Safety Issues. These are defined by the ATSB as "events or conditions that increase safety risk and (a) can reasonably be regarded as having the potential to adversely affect the safety of future operations, and (b) are a characteristic of an organisation or a system, rather than a characteristic of a specific individual, or are characteristic of an operating environment at a specific point in time."

Two "Other factors that increased risk" were also identified, one of which was also classified as a Safety Issue.

The Final Report was published on 28 February 2014. No Safety Recommendations were made.