On 6 February 2019, an Airbus A330-200 Captain’s Audio Control Panel (ACP) malfunctioned and began to emit smoke and electrical fumes after coffee was spilt on it. Subsequently, the right side ACP also failed, becoming hot enough to begin melting its plastic. Given the consequent significant communications difficulties, a turnback to Shannon was with both pilots taking turns to go on oxygen. The Investigation found that flight deck drinks were routinely served in unlidded cups with the cup size in use incompatible with the available cup holders. Pending provision of suitably-sized cups, the operator decided to begin providing cup lids.

On 6 February 2019, an Airbus A330-200 (G-TCCF) being operated by Condor on a scheduled international passenger flight from Frankfurt to Cancun, Mexico, was in the cruise west of Ireland when a cup of coffee which had been placed on the Captain’s tray table was knocked over and some of its contents ended up on the left side Avionics Control Panel (ACP) which immediately malfunctioned. This unit subsequently became very hot and emitted an electrical burning smell. When the right side ACP also began to malfunction and the left side unit began to emit smoke, the resulting communications difficulties led to a decision to divert to the nearest available airport, Shannon, with the pilots alternately using oxygen. No emergency was declared but the diversion was accomplished without further event.

An Investigation was carried out by the UK AAIB. It was noted that the 49 year-old Captain, had a total of 13,135 flying hours which included 1,050 hours on type. The experience of the other pilot, who had been PF at the time, was not recorded.

It was established that the Captain had placed a cup of coffee on his extended (fold out) tray table after it had been provided (as was routine practice for this operator and route) in an unlidded cup. He had then began to perform some routine tasks during which the cup was inadvertently knocked over with the contents reported to have partially spilled onto the rear of the centre console where the Captain’s Avionics Control Panel (ACP 1) is located. This led to “an immediate malfunction” of ACP 1 which “affected VHF radio communications and PA announcements from that unit”.

Approximately twenty minutes later the malfunctioning left side unit was reported to have become “very hot and failed” with an “electrical burning smell” becoming apparent on the flight deck. After a further twenty minutes, the First Officer’s Avionics Control Panel (ACP 2), which was located opposite ACP 1 on the right hand side of the central console, was reported to have become “hot enough to start melting one of its buttons and failed” with “a small amount of smoke (now) coming from ACP 1”. Increasing communication difficulties now included an inoperative interphone and the meant that the Captain could only hear radio transmissions through the First Officer’s speaker. The Captain decided to divert to Shannon and this was achieved with the flight crew alternately using supplementary oxygen so that one pilot was on oxygen at all times but was otherwise without further event. During the diversion, the smoke stopped and only a residual burning smell remained.

Both the affected ACPs were removed and examined by the OEM with the failure of ACP 1 attributed to liquid contamination. The failed components in ACP 2 were identified but the report of the OEM “did not offer potential causes (for) these failures”. However, it was considered that nevertheless, the failure of both ACPs had been the spillage of coffee on the central console.

In respect of the risk of spillage created by placing a cup of coffee on the fold out extension of the pilot table installed on the aircraft type involved, it was noted that “the A330 Flight Crew (Training) Manual states that Airbus highly recommends that the flight crews put and store all objects in their dedicated area in the cockpit: cups in the cup holders”. However, it was found “the size of cups used by this operator on this route made it more difficult to take cups in and out of the cup holder than larger cups that have a bigger area at the top of the cup holder to grasp” and considered that “this incompatibility generally discouraged use of the cup holder, despite the policy”. It was also observed that “a lid properly secured on the top of the cup may have reduced the amount of liquid spilled on the centre console”. 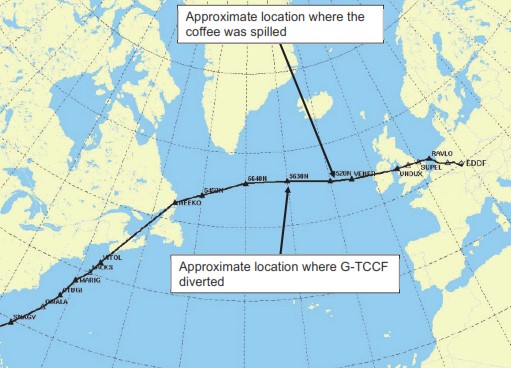 The intended track, showing point of spill and point of diversion. [Reproduced from the Official Report]

The formally-documented Conclusion of the Investigation was that “a spillage of coffee on to the centre console led to the failure of ACP 1 and 2 resulting in communication difficulties for the flight crew (after which) the resulting electrical burning smell and smoke in the cockpit necessitated a diversion to Shannon Airport”.

Safety Action taken by the operator was noted as including “changing their procedure to ensure that cup lids are provided for flights on all routes and reminding cabin crew of the requirement to use them”. An intention to “source and supply appropriately sized cups for the aircraft’s cup holders” was also advised.

The Final Report of the Investigation was published on 12 September 2019. No Safety Recommendations were made.