On 17 October 2014, an Airbus A330-200 crew taking off from Madrid at night detected non-runway lights ahead as they accelerated through approximately 90 knots. ATC were unaware what they might be and the lights subsequently disappeared, and the crew continued the takeoff. A reportedly unlit vehicle at the side of the runway was subsequently passed just before rotation. The Investigation found that the driver of an external contractor's vehicle had failed to correctly route to the parallel runway which was closed overnight for maintenance but had not realised this until he saw the lights of an approaching aircraft.

On 17 October 2014, an Airbus A330-200 (ED-LNH) being operated by Air Europa on an international passenger flight from Madrid to Santa Cruz (Viri Viri), Bolivia with 279 persons on board as AEA 025 with an augmented crew was on its takeoff roll on runway 36L in normal night visibility when the crew identified a light ahead which ATC were unable to explain. They continued and completed the takeoff having seen an occupied vehicle with its lights off leaving the side of the runway shortly before rotation. ATC were advised of this after takeoff and instituted a search for the vehicle which had left the runway without the driver subsequently reporting what had happened to anyone. It was eventually traced.

A Serious Incident Investigation was carried out by the Spanish Commission for the Investigation of Accidents and Incidents (CIAIAC). The FDR was subsequently downloaded and ATC voice and SMR/MLAT data were also available. It was noted that the weather conditions - light winds, good visibility and a dry runway had not had any bearing on the incursion.

Analysis of the available evidence confirmed that the vehicle seen by the A330 crew as they were about to get airborne was the source of the unidentified lights which they had earlier reported seeing ahead to ATCC. It was established that the vehicle was being driven by an employee of a contractor which was engaged in overnight maintenance work on parallel runway 36R/18L which was closed to traffic for that reason. The vehicle driver had been intending to access the closed runway from the perimeter road but "lost situational awareness" and had instead entered active runway 36L/18R and proceeded to drive along it alternately in each direction before seeing an approaching aircraft, moving to the side of the runway and turning the vehicle headlights off.

It was found that the vehicle had initially been driven north on the service road which is to the west of runway 36L/18R proceeding from Point A to Point B marked on the diagram below before turning right on taxiway ZW4 and continuing across the parallel taxiway. On reaching the active runway, the vehicle initially turned right at Point C before reversing direction and driving north to Point D, approximately 2,700 metres from the start of the 4,179 metre-long runway at which point the direction of travel was reversed and the vehicle was again driven south before it pulled to the side and off the runway at Point E where it was when the aircraft passed. 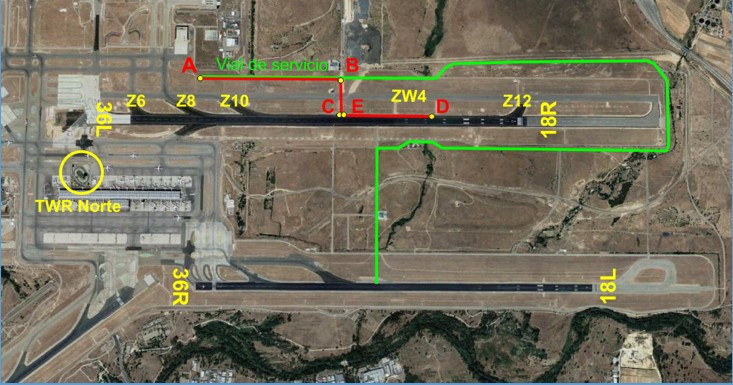 It was found that just before the vehicle made its initial turn right from taxiway ZW4 onto the runway and began driving in a southerly direction, the A330 had begun its takeoff roll from the full length of the runway. 24 seconds after beginning the takeoff with the aircraft accelerating through a recorded 89 KCAS the crew noticed the presence of lights ahead which were not runway lights. When they reported this to ATC, the controller responded that they did not know what these might be and the crew elected to continue their takeoff since the lights previously seen had subsequently disappeared from view.

As the aircraft accelerated through a recorded 159 KCAS, at a position subsequently determined as about 1,875 metres from the runway threshold, the Captain reported having caught sight of a vehicle just to the left side of the runway which was leaving the paved surface with its headlights turned off. The aircraft began rotation and took off soon afterwards.

The sequence in time-referenced detail is provided below from the Official Report with the corresponding text translated: 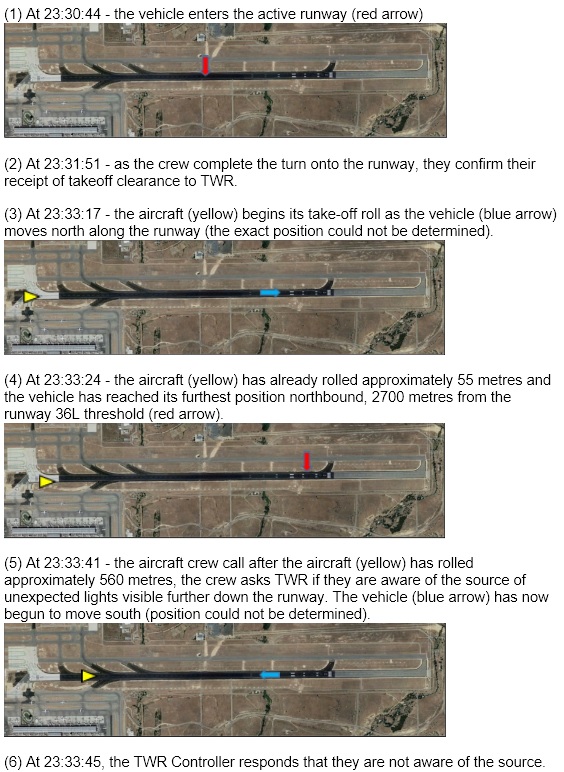 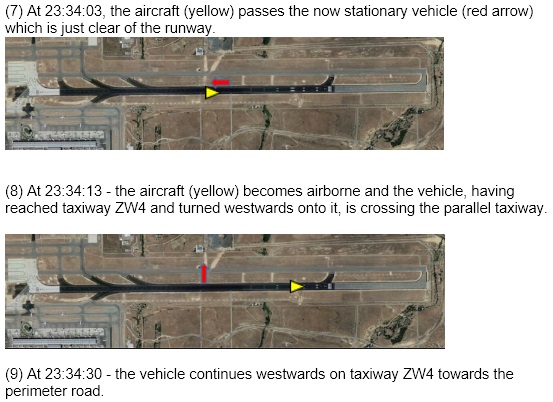 The vehicle driver subsequently stated that he had not been supposed to be working on the night in question and was only doing so to replace a colleague. He said that "he usually called his manager to check the exact location he should go to but that night did not do this". The driver had not selected the vehicle's anti-collision light on and it was not equipped with a radio or a transponder. He reported that he had entered the active runway believing that it was the closed one to which he had been tasked to deliver supplies. On entering the runway, he had been searching for the workers he had expected to find using the vehicle headlights whilst driving between the runway western edge and its centreline and after travelling north had reversed direction when he did not find them. Only then had he seen bright lights in the distance. He had initially thought that these may be lighting at the work sites but "soon he noticed that the lights were approaching with great speed and realised that they were from an aircraft". He stated that having cleared to the side of the runway, "he observed the light on the tip of the wing passing close but not above the vehicle" and claimed that "at no point had he turned off the vehicle headlights".

The Investigation took the view that the vehicle driver's failure to report what had happened to either his company or the airport once he had exited the active movement area was "indicative of a lack of responsibility for his actions and a lack of training in safety culture". It also took the view that "the crew should have proceeded to reject the takeoff once lights ahead had been sighted at the relatively low speed of 89 knots". The corresponding action by Air Europa to remind its pilots about the need to reject a takeoff if there is even the slightest suspicion that the runway is not clear was noted.

It was noted that the TWR controller stated that he had checked the runway visually and seen nothing before issuing the A330 takeoff clearance and had also not seen any primary returns on the radar. It also could not be established why nothing was apparently evident to him when the crew reported seeing lights ahead, since by then the vehicle was present on the recorded radar and, since it was heading south, its headlights should have been visible too.

In respect of AENA as the Airport Operator, the Investigation noted both inadequate attention paid to the risks posed by the contractor's presence on the airport given that "the latter in turn evaded its responsibility to comply with the procedures set out in the document which established the contractual relationship with the airport". It was concluded that despite action taken since the event under investigation, "the methods for monitoring the movement of external workers within the airport area can be improved."

The Cause of the event was formally documented as "the loss of the situational consciousness of the driver of a vehicle of a contractor employed by the airport operator that led to him being present on an active runway at the same time as an aircraft was taking off".

The Final Report of the Investigation is only available in Spanish and was approved on 21 December 2016. In view of corrective Safety Action taken by the various parties since the event, it was concluded that it was not necessary to issue any Safety Recommendations.

Editor's Note: In the absence of a published English Language translation of the Official Report, this summary has been prepared on the basis of an informal translation and no responsibility can be taken for any errors that may have resulted from this.