On 13 November an Airbus A330-200 being operated by Garuda on a scheduled passenger flight from Dubai to Amsterdam and a Boeing 737-800 being operated by KLM on a scheduled passenger flight from Manchester to Amsterdam were being radar vectored to Instrument Landing System (ILS) approaches to runways 18C and 18R respectively in day Visual Meteorological Conditions (VMC) when the prescribed traffic separation was lost. ATC gave corrective headings and the two aircraft then continued their ILS approaches as planned. There were no abrupt manoeuvres and no TCAS RAs during deconfliction.

An Investigation was carried out by the Dutch TSB using radar and R/T recordings. It was noted that the former had a refresh interval or time lag of 5 seconds.

It was established that both aircraft had been under radar control service to join the localiser of their landing runway - 18R for the Boeing 737 and 18C for the Airbus 330. This service was, as required by ATC procedures, being provided by controllers with individual responsibility for each approach. Recorded data showed that all instructions to both aircraft had been followed correctly but that the normal procedures for the dependent parallel approaches flown on these runways when traffic demand was high enough had been suspended by the controller responsible for runway 18C during a gap in traffic joining from the west for runway 18R. Such a suspension of the normal procedures was found to be permitted but this discretion was not accompanied with any guidance on ensuring that such a suspension ceased once the gap in other runway arrivals ceased.

In the investigated incident, the controller who had suspended the normal procedure of vectoring from the east to the 18C ILS due to a gap in traffic from the west was descending his traffic to 2000 feet instead of 3000 feet - although the Investigation noted that since the base leg track was unchanged, this deviation was not delivering any operational benefit. The Airbus 330 was the fourth aircraft he had done this with but by this time, a Boeing 737 was being vectored from the west for the runway 18R ILS and the two aircraft were closing on opposite headings at the same cleared altitude. The two controllers noticed the developing conflict with the aircraft 5.7nm apart and at similar speeds and the Boeing, having just been given a right turn to an intercept heading of 160° was, four seconds later, given a left turn onto 360°. Then, a few seconds later, with the Airbus having been turned on to a heading of 210°, the Boeing was instructed to turn right again onto a heading of 160° when the controller realised that the effect of the instructed left turn was going to produce less separation than the right turn to close the ILS. Within just under 20 seconds, each of the aircraft had reported visual acquisition of the other. As both aircraft continued their headings, the Airbus without the usual instruction to establish on the ILS Localiser from the heading given because the controller had forgotten to give that instruction, both received two successive TCAS TAs. The minimum separation of 0.6nm at the same altitude was reached just as the Boeing began to turn left to establish on the 18R localiser and soon afterwards, the Airbus was given a heading to close the 18C localiser from the right having gone slightly through it. The remainder of both approaches was uneventful. 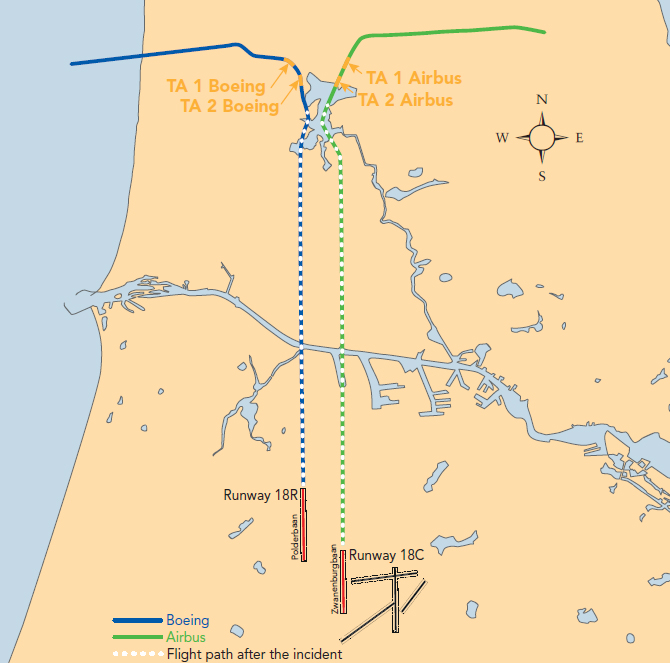 The Investigation concluded that the cause of the conflict was the failure of the controller vectoring to runway 18C to resume the normal operational procedure of vectoring traffic to the 18C localiser at 3000 feet when the gap in traffic from the west finished. Although it was clear that “no immediate chance of a collision was present” it was considered that the loss of prescribed minimum separation represented “a possible breach of flight safety”. It was noted that whilst it was necessary for controllers to be afforded a degree of operational flexibility in handling traffic, such discretion should be “conducted…within written boundaries”. Accordingly, the Investigation recommended that LVNL (the ANSP) should “give extra attention to the circumstances under which ATC controllers are allowed to deviate from procedures in their safety program”. It was also observed that “controllers must be aware that they cannot operate individually, but are dependent on each other, especially when deviating from procedures” and appreciate that “strict co-ordination and communication are needed to maintain separation during parallel approaches”.

The Final Report of the Investigation was released in May 2013. No formal Safety Recommendations were issued.

Editor’s Note: It is unclear whether the recommendation made as a consequence of this Investigation and quoted above verbatim from the Final Report has the status of a formal Safety Recommendation.