On 3 May 2017, an Airbus A330 and an Airbus A319 lost prescribed separation whilst tracking in opposite directions on a radar-controlled ATS route in eastern Myanmar close to the Chinese border. The Investigation found that the response of the A330 crew to a call for another aircraft went undetected and they descended to the same level as the A319 with the lost separation only being mitigated by intervention from the neighbouring Chinese ACC which was able to give the A319 an avoiding action turn. At the time of the conflict, the A330 had disappeared from the controlling ACCs radar. 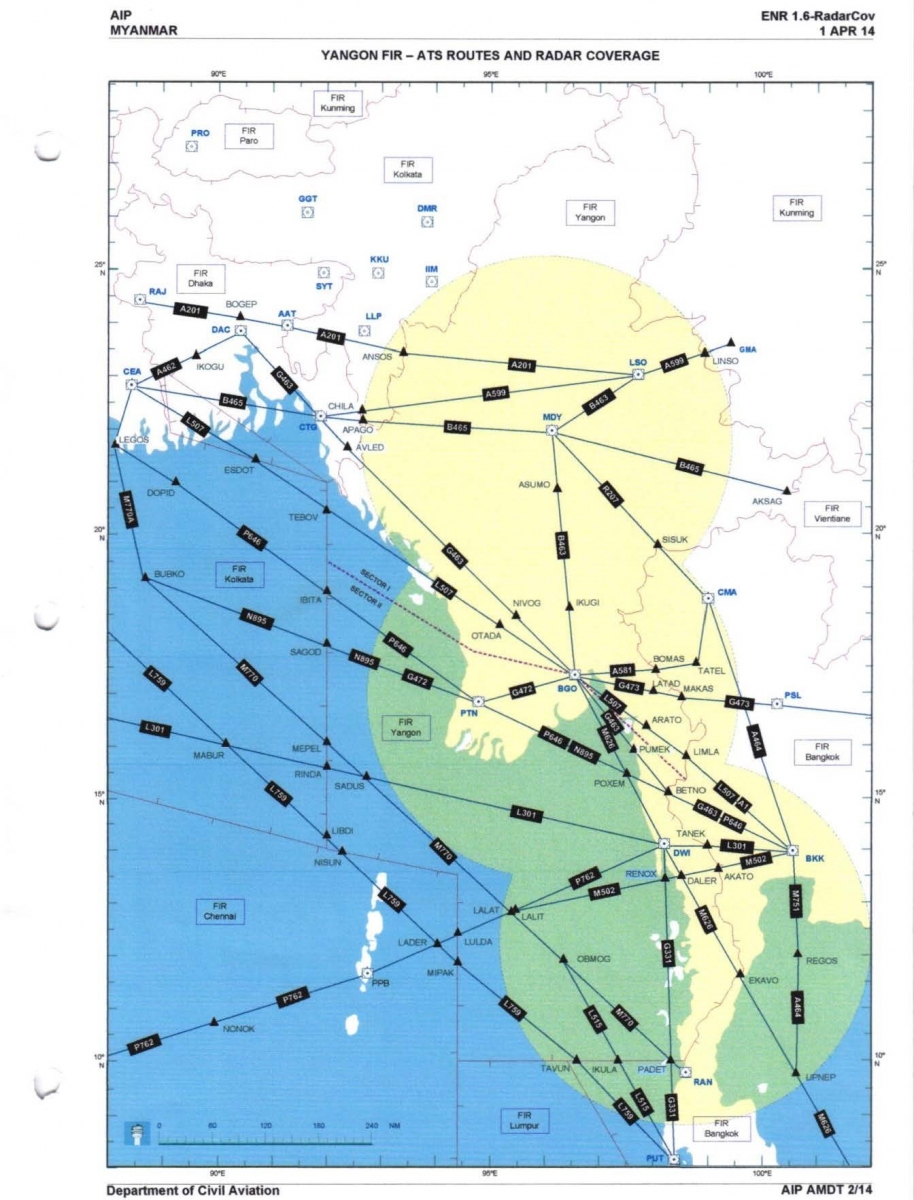 An AIP extract showing the cover of Mandalay Radar including ATS route A599 on which the conflict occurred. [Reproduced from the Official Report]

An Investigation was carried out by the Myanmar Accident/Incident Investigation Bureau (MAIB). Examination of data from the FDR and CVR of the two aircraft involved and the prevailing weather conditions were both recorded by the Investigation as "not applicable".

It was established that the A330 had been transferred to Yangon ACC by Kunming ACC 8nm prior to the Chinese/Myanmar border at waypoint LINSO. When overhead this waypoint, the crew called Yangon ACC and advised that they were maintaining FL 360. A few seconds later, without acknowledging this initial call, the controller transmitted to another aircraft identified as "MJC" that they were identified and should report LSO and descend to FL350 as FL370 was not available due traffic. The A330 crew then responded to the call made to "MJC" without including their callsign but confirming the next reporting point and seeking confirmation of the descent instruction to which the controller replied "affirm descend FL 350" also without including the callsign and the A330 crew responded with "603, next report LSO and right now descend to FL 350". This was followed immediately by the Controller with "MJC, affirmative descend FL 350" to which the A330 crew responded to with "Descend to FL 350, next report position LSO thank you CSC 603".

The A330 began descent from FL 360 to FL 350, the level which the A319 was maintaining in accordance with its clearance. At this time, the radar display being used by the controller did not show the A330. About a minute later, a Predicated Conflict Alert (PCA) was annunciated on the Kunming ACC radar display showing that the A330 was descending to the level already occupied by the eastbound A319. The Kunming Controller "tried to coordinate with Yangon ACC" and meanwhile called (the A319) and told its crew to make an immediate right turning onto a heading of 125° to avoid the opposite A330 which resolved the conflict. As the two aircraft passed, the ADS-B data from the A330 appeared on the radar screen at Yangon ACC showing it at FL 352 as it passed within about 2.5 nm of the A319 at FL 350 which was in the instructed right turn and passing through 101°. Thirty seconds later, the radar track of the A330 reappeared on the Yangon radar display showing that the A330 was now climbing through FL 357 and the A319 was still in the right turn.

The Investigation found that although the radar controller involved had been working in the Yangon ACC for "about four years", he had never completed the ACC radar course which meant that he was "unlicensed" in respect of the applicable regulatory requirements. It was noted that neither he nor the A330 crew had conducted their RTF communications in accordance with the procedures for use of callsigns. The A330 crew had failed to listen out with sufficient care and the controller had failed in the same way to listen carefully to readbacks and challenge any that were incomplete or incorrect.

The formally-documented Findings of the Investigation included a description of the RTF communications performance of both the duty controller and the A330 crew as "careless" in respect of both their transmissions and their listening, especially in respect of callsigns. In addition, it was found and that the Yangon ACC radar coverage of A599 in the area where the conflict had occurred was "not good enough" and it was noted that the event under investigation had not been reported to the MAIB by either the A330 pilots or the duty controller who had been the direct cause of it.

The Primary Cause of the conflict was formally documented as "the duty air traffic controller and the pilot from (the A330) listened carelessly to their conversation in their radio communication especially not concentrating on the aircraft Call Sign".

A Contributory Factor was also identified as follows:

A total of 5 Safety Recommendations were made as a result of this Investigation as follows:

The Final Report of the Investigation was released on 8 September 2017. It did not make any mention of TCAS 2 in respect of either of the aircraft involved.