On 14 February 2017, an Airbus A330-300 preparing to depart Narita entered the active runway at night without clearance as another Airbus A330-300 was approaching the same runway with a landing clearance. ATC observed the conflict after an alert was activated on the surface display system and instructed the approaching aircraft, which was passing approximately 400 feet and had not observed the incursion, to go around. The Investigation attributed the departing aircraft crew’s failure to comply with their clearance to distraction and noted that the stop bar lighting system was not in use because procedures restricted its use to low visibility conditions.

On 14 February 2017, an Airbus A330-300 (HS-XTC) being operated by Thai AirAsia on a scheduled international passenger flight from Narita to Bangkok flight 607 failed to stop at the holding point of the active runway 34R in night VMC and when ATC realised this, another Airbus A330-300 (B-18361) being operated by China Airlines, which had been cleared to land on the same runway and was only about a mile from touchdown, was sent around.

An Investigation was carried out by the Japan Transport Safety Board (JTSB). FDR data was subsequently downloaded in support of the Investigation, but that from the two CVRs was not as both aircraft had continued flying and relevant information had been overwritten. ATC MLAT data and recorded images from airport surveillance cameras were also available.

It was established that the departing aircraft had been cleared to the holding point at the full length of runway 34R via taxiways ‘B’ and ‘B9’ (see the illustration below). 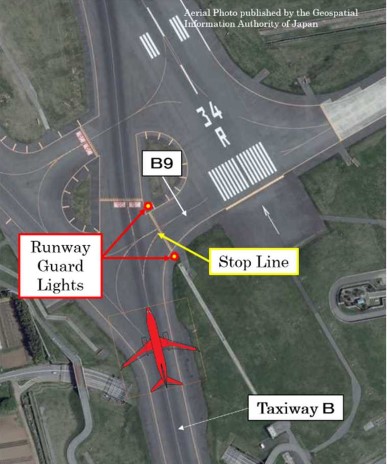 The estimated stopping position of the departing aircraft based on FDR and MLAT. [Reproduced from the Official Report]

The Runway Guard Lights on taxiway ‘B9’ were flashing but the stop bar lighting was not illuminated red as the prevailing procedures only require it to be used in low visibility conditions. The TWR was equipped with an Airport Surface Display System which provided the real time positions of live aircraft and suitably equipped other traffic. This automatically provided an alert to the controller if the holding point had been crossed contrary to clearance and traffic was simultaneously on finals and within approximately 2,900 metres, and this alert prompted him to take de-confliction action.

It was noted that the Captain of the departing aircraft was familiar with the departure involved but the First Officer who had only recently qualified on type was not. When the Captain asked him to turn on the runway exit lights on the nose landing gear to make it easier to see where the holding point was as the turn onto B9 neared, he inadvertently turned on the strobe lights in error. He had to be asked to take corrective action which created a distraction for both pilots at a critical moment. TWR queried the position of the aircraft after seeing the alert on the Surface Display System and within two seconds of this transmission, FDR data showed that the aircraft ground speed had become zero. Unsure of the extent of the incursion, the TWR controller instructed the approaching A330 to go around in order to assure safety. The incursion was subsequently determined to have been approximately 60 metres.

In respect of the geometry of the access to the full length of runway 34R, the Investigation noted that the ideal arrangement for access to active runways is for an aircraft at the holding point to be at 90° to the runway centreline so that a departing aircraft pilot can easily confirm the position of the holding point and readily see an aircraft on approach. However, whilst taxiway ‘B9’ is at such a right angle, there is insufficient distance to align a long aircraft with its centreline because the turn from taxiway B will not be complete before reaching the holding point and so for that reason, stopping on taxiway ‘B’ may be desirable for such aircraft. This situation was considered to merit a study by the Airport Installation Manager on how to prevent a runway incursion by considering the visibility of the marked Holding Point.

The Investigation formally determined that the Probable Causes of the Serious Incident were that “the departing Airbus A330-300 entered runway 34R across the Stop Line despite the instruction given to it by the Tower to hold short of this line and an Airbus A330-300, which had been given landing clearance for the same runway had to be instructed to go around” and that it was “somewhat likely that the departing A330 entered the runway when both its pilots failed to notice the Stop Line and the Runway Guard Lights because they were concentrating on operating the switches in the cockpit and forgot to pay attention to the outside”.

The Final Report of the Serious Incident was adopted by the JTSB on 9 February 2018 and published on 27 March 2018. It was assessed as an ICAO Category ‘C’ severity event and no Safety Recommendations were made.