On 16 April 2012, a Virgin Atlantic A330-300 made an air turnback to London Gatwick after repetitive hold smoke detector warnings began to occur during the climb. Continuing uncertainty about whether the warnings, which continued after landing, were false led to the decision to order an emergency evacuation on the runway. Subsequent investigation found that the smoke warnings had all been false and had mainly come from one faulty detector. It also found that aspects of the way the evacuation had taken place had indicated where there were opportunities to try and improve passenger behaviour.

On 16 April 2012, an Airbus A330-300 (G-VSXY) being operated by Virgin Atlantic Airways on a scheduled passenger flight from London Gatwick to Orlando USA with an augmented crew began to receive intermittent aft cargo hold smoke warnings whilst in the climb. The corresponding drill was accomplished, a PAN call made and a return to Gatwick for an overweight landing was commenced. The intermittent smoke warnings continued but otherwise the turn back was uneventful. After stopping on the runway, an emergency evacuation was ordered in which two of the 317 occupants were seriously injured. No signs of fire or smoke were evident to the attending Rescue and Fire Fighting Services.

The event was investigated by the UK Aircraft Accident Investigation Branch (UK) (AAIB). The Investigation noted that aircraft commander had been the PF for the flight and that although the operating crew were experienced pilots, in both cases their time on the aircraft type involved was low - in the commander’s case just 155 hours.

It was established that the first of the smoke warnings, which lasted 7 seconds, had occurred as the aircraft passed FL187 some 15minutes after take off. After a short pause, the warning was annunciated again and lasted 9 seconds. The commander made contact with the Company engineering base whilst the third crew member went into the cabin to see if there was any corroborating evidence of an actual fire or overheat. During the call to engineering, the warning began again and the commander terminated the conversation with engineering and decided that a return to Gatwick should be made. Having just been advised by London ACC to call Brest ACC, the First Officer then advised the latter that a technical problem meant that routing back to London was now required. However, the response to this request was an onward clearance and a request for the required cruising level, so the commander declared a PAN advising of “smoke in the cargo hold”. When this was acknowledged and the controller said they would call back shortly, the commander replied that he was turning the aircraft back towards London and this prompted the controller to pass a London frequency to call.

The aircraft was levelled at FL220, the First Office took over as PF and the crew carried out the Electronic Centralized Aircraft Monitor (ECAM) actions and made contact with London. The intermittent smoke warnings continued - see the annotations on the map of the flight track taken from the official report below. The Flight Service Manager (senior cabin crew member) was briefed by the commander and advised that although an evacuation after landing was a possibility, this should not take place unless specific instructions to that effect were given. An ILS approach to Runway 08R was accomplished and the aircraft brought to a stop on the runway where direct contact was made with the attending RFFS. After a further smoke warning and a degree of doubt in respect of the external inspection, the commander advised the RFFS that he was going to order an evacuation and declared a MAYDAY three minutes after the aircraft had come to a stop. 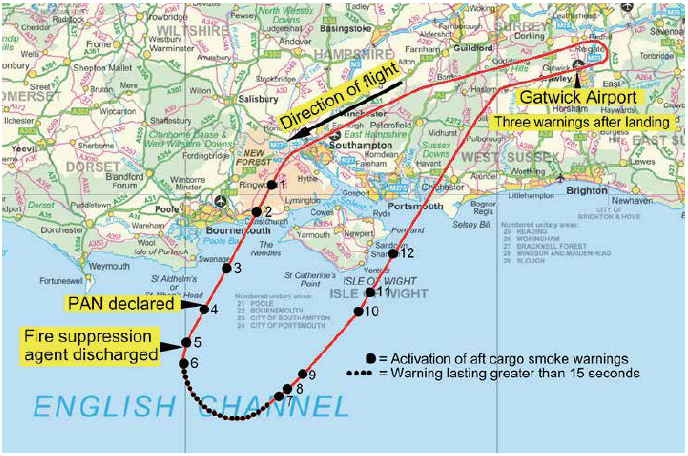 The RFFS advised the Investigation that they “had been told that the aircraft had smoke in the cockpit” and had therefore positioned their vehicles at the front of the aircraft. Only after talking to the aircraft commander did the officer in charge learn that the problem was actually possible smoke in the aft cargo hold. In order for thermal imaging cameras to be able to detect potential heat spots deeper within this hold, which was carrying largely perishable goods, some pallets had to be removed but “once sufficient space had been created, it was discovered that there was no smoke present and that there were no heat spots”.

It was found that the incorrect information abut the nature of the emergency was the result of incorrect transmission of information in London ATC. It was found that the ATC planner involved had received a (correct) phone call from the Brest controller advising that the aircraft had “smoke on board” and was diverting back to London Gatwick. However, this information was passed on as “smoke in the cockpit” to both the ACC Controller and the ATC Watch Manager at Gatwick. The airport had consequently declared a ‘Full Emergency’ for an aircraft with smoke in the cockpit. The planner “stated subsequently that he had just completed his Training in Unusual Circumstances and Emergencies (TRUCE) and the training scenario included an aircraft with a suspected fire on board”. He also stated that “the garbled sounding RTF” led him to believe that the pilots were using oxygen masks and that therefore there was smoke in the cockpit.

The absence of any evidence of fire or smoke in the cargo holds led to the conclusion that the 15 smoke warnings annunciated had been false. A detailed assessment of how these false warnings has been generated led to the following findings:

The failed slide inflation was found to have probably been the result of a packing fold which had led to an early release of the primary restraint and the non-release of the secondary restraint. It was found that the slide involved “had been manufactured and packed before a change to packing instructions was implemented, to address previous similar partial inflations”.

In respect of the intermittent cargo smoke warnings the Investigation formally recorded the following Causal Factor:

“A latent fault on the T1 thermistor of smoke detector 10WH, in combination with a CAN Bus fault and possible high levels of humidity in the cargo compartment due to the carriage of perishable goods, provided circumstances sufficient to generate multiple spurious aft cargo compartment smoke warnings.”

Two Contributory Factors in respect of the intermittent cargo smoke warnings were also formally stated as:

(i) The thermal channel fault in 10WH was not detected prior to the event by the internal smoke detector temperature monitoring.

(ii) The proximity of the fire extinguisher nozzles to the smoke detectors.

Safety Action was noted as planned by Airbus to change the degraded mode ECAM message to a Class 2 Maintenance Message so that it is reflected on the ECAM status page.

Seven Safety Recommendations were issued as a result of the Investigation as follows:

The Final Report was published on 12 February 2014.