On 22 April 2013, a lower deck smoke warning occurred on an Airbus A330-300 almost 90 minutes into the cruise and over land. The warning remained on after the prescribed crew response and after an uneventful MAYDAY diversion was completed, the hold was found to be full of smoke and fire eventually broke out after all occupants had left the aircraft. The Investigation was unable to determine the fire origin but noted the success of the fire suppression system whilst the aircraft remained airborne and issues relating to the post landing response, especially communications with the fire service.

On 22 April 2013, an Airbus A330-300 (9V-STO) being operated by Singapore Airlines on a scheduled passenger flight from Singapore to Dhaka as SQ446 was almost 1½ hours into the flight and in the cruise at FL360 at night when just after entering Myanmar airspace, an ECAM Warning of SMOKE in one of the lower deck holds was annunciated. Although the corresponding checklist action was taken, the warning remained and so a MAYDAY was declared and a diversion to Bangkok made without further airborne problems. Once all passengers had disembarked and the hold involved was opened, large quantities of smoke appeared and despite RFFS, intervention, a significant fire subsequently erupted in the hold before being extinguished. There were no injuries but the aircraft compartment involved was damaged and a cargo container which had been at the centre of the fire and some of its contents were destroyed.

The Thailand Department of Civil Aviation classified the event as a Serious Incident and delegated the conduct of the Investigation to the Singapore Accident Investigation Bureau (AAIB).

It was established that the first sign of anything untoward was the detection by the First Officer of “a slight burning smell coming from the ventilation blowers in his position”. The Captain was not aware of any unusual smell as the vents of his blowers were closed. Soon afterwards, just after the aircraft had crossed into Myanmar airspace, an AFT/BULK CRG SMOKE warning was annunciated indicating a problem in the rear lower deck hold. This consisted of a main compartment for ULDs and pallets and small bulk cargo compartment, these two compartments being separated by a cargo net (see below). The applicable Checklist was executed and fire extinguishing agent was discharged into the rear hold. Soon after the appearance of the warning, one of the cabin crew contacted the crew using the interphone at Door 3L and advised that he and some of the passengers in that vicinity had detected a burning smell.

Despite the action taken, the ECAM message remained and it was decided to divert to the nearest available airport, Bangkok. Yangon Control were advised accordingly and fifteen minutes after the ECAM warning had appeared, it was still present and on transfer to Bangkok APP, a MAYDAY was declared. Aware that they had received a pre-departure NOTOC (Notification to Captain) recording the presence of Dangerous Goods on board, this fact was communicated to ATC. On transfer to Bangkok TERMINAL APP, landing priority was confirmed and, with ARFS vehicles deployed alongside the landing runway, a further query from ATC resulted in a confirmation that there were three Dangerous Goods items on board but no further details about them were communicated. 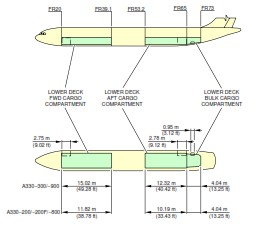 The location of the lower deck rear hold. [Reproduced from the A330 ‘Aircraft Characteristics - Airport and Maintenance Planning Document’]

ATC were advised by the crew that they would stop the aircraft on the runway for an ARFS inspection and the landing was made 33 minutes after the appearance of the ECAM warning, which had remained illuminated throughout the flight. Once stopped, the crew repeated the request for the ARFS inspection “three times over a period of about four minutes (but) the controller did not answer it (and) instead asked if the crew could taxi the aircraft”. After the third request, the controller asked if the ARFS vehicles should be moved away so that the aircraft could taxi to its allocated parking bay and the crew responded that if there was no smoke then yes. Taxi clearance was subsequently given and whilst taxiing, the controller asked “if the emergency was terminated” to which the First Officer replied that it was not and requested that the ARFS vehicles should follow the aircraft and re-inspect the aft cargo area of the aircraft once it was parked.

Once parked, the First Officer asked the controller if the ARFS had observed any smoke from the aft cargo area and was told that “everything was normal” and followed this soon afterwards with a request for the crew to “report emergency terminated”. An initial response to that effect from the First Officer was quickly followed by the intervention from the Captain who informed the controller that he would terminate the emergency only after all the persons on board had disembarked and the aft cargo area had been inspected and requested that the ARFS should remain on standby for “a further ten minutes”.

About three minutes after the aircraft had parked, engineering personnel attending the arrival advised the crew via the ground/flight deck intercom contrary to the ARFS report, smoke was coming come out of the aft cargo area. They were told to ensure that the hold door was not opened until everyone on board had disembarked. This disembarkation was completed 22 minutes after landing by which time the NOTOC had been passed to a member of the ground handling staff.

Ground handling staff then opened the aft cargo compartment door upon which “white smoke started billowing out of that door”. The ARFS discharged carbon dioxide extinguishant into the compartment and asked the ground handling staff for information on the dangerous goods on board. They were told only about the presence of one of the three items on the NOTAC and there was no mention of where it had been loaded.

After 10 minutes, the white smoke began to clear and the ground handling staff were requested to expedite the unloading of the cargo containers in the hold so that the ARFS could locate the origin of the fire. However, this request was declined as they were “not suitably attired and equipped”.

After a further 22 minutes, with the aft hold door still open but with no unloading having taken place, “dark black smoke started billowing out from the hold, several explosion-like sounds were heard and thereafter, a huge flame developed within the hold”. The ARFS extinguished the fire with water.

After a further 40 minutes - 1 hour and 34 minutes after the aircraft had stopped on the runway after landing - ground handling staff, in the presence of the ARFS, began unloading the hold using a high loader. The ARFS sprayed carbon dioxide extinguishant into the hold from time to time to cool it.

While the cargo container at position 42L was being unloaded, “its contents burst into flames as it was moved onto the high loader” and the ARFS used carbon dioxide to extinguish this. Once the 42L container had been unloaded, it was placed 100 metres away from the aircraft. Subsequently, its remaining contents again re-ignited but by then, the ARFS had learned that it did not contain any dangerous goods and water was used to extinguish the fire.

All the remaining contents of both rear hold compartments were then unloaded and a thermal imaging camera was used to check them for any heat source or unusual condition and after none was found, the emergency was declared over. Damage to the aircraft was limited to the interior of the lower deck rear hold and examination of the aircraft wiring within the hold found that this did not include any effects on the electrical systems in the hold. The 42L container was extensively damaged and the adjacent one at 43L sustained slight damage.

The contents of the 42L container were 100 packages which did not include the 3 declared dangerous goods items. These packages were put in the container by Singapore Airlines’ cargo handling contractor. The majority of the packages were of fabric, 99 of them being shipped for the same consignor. The other package was an envelope containing documents.

Container 42L sustained severe damage and the first consignors 99 packages sustained varying degrees of fire damage. The other consignor’s single package was not damaged. The adjacent container at position 43L was also fire damaged and a small part of its contents were destroyed by the fire. None of the three notified dangerous goods items were in these two containers and they were not damaged in the incident.

Expert examination of the 42L container identified an area in the lower middle part of it which appeared to be where the fire had started. Only one item in the container contained any trace of ignitable fluid and this was a damaged bale of fabric that was heavily soaked with what was subsequently identified as ethanol. Because of the extensive fire damage, many of 100 packages which had been loaded in the 42L container could not be identified and attempts to get meaningful information from the shippers of the packages were only partially successful.

It was established that the 99 packages loaded in container 42L were trans-shipment cargo which had originated from various countries and been flown to Singapore and then been consolidated for onward shipment to Dhaka. They had arrived at the consignor’s facility throughout the day before being taken to the cargo handler for loading a little under two hours prior to the departure of the flight. The loader who transferred the 100 packages to the 42L container recalled loading the bale of fabric that had been found after the fire to be heavily soaked with ethanol and that it had been both dry and devoid of any unusual smell.

The consignor of the 99 packages advised that all but one of them had been recorded as having been X-ray screened at their countries of origin before being shipped to Singapore. The applicable regulatory requirement for further screening of transhipment cargo at Singapore required the consignor to choose items at random for X-ray screening and 7 of the 99 packages in the main consignment had been screened on that basis. The 99th package had originated from New Zealand and had not been X-ray screened there before being shipped to Singapore and was also exempted from the sampling of selected items at transhipment once there. There was no requirement for the cargo handler to undertake further screening and CCTV surveillance of relevant activity at both the main consignor and the cargo handler was available but did not yield any useful information.

Given all the above, the Investigation was unable to determine the cause of the fire but did consider that it had highlighted four areas of safety interest as follows:

A total of four Safety Recommendations were made as a result of the Investigation as follows: