On 15 September 2020, an Airbus A330-300 touched down at Medan partially off the runway as a result of misjudgement by the right seat handling pilot before regaining it and completing the landing roll. The aircraft and some runway lights were damaged. The handling pilot was an A320/A330 dual-rated Instructor Pilot conducting standardisation training on a new Captain who had not flown for 7½ months having himself not flown from the right seat for six months. The continuing Investigation has recommended that the State Safety Regulator issues guidance in support of its temporary alleviations to pilot recency requirements.

On 15 September 2020, an Airbus A330-300 (PK-LEG) being operated by Lion Air on a scheduled domestic passenger flight from Jakarta Soekarno-Hatta to Medan as LNI208 touched down at destination on runway 23 after a day VMC final approach partly off the edge of the paved surface and in long grass before fully regaining it and completing the landing roll. Two runway edge lights were subsequently found to have been destroyed with corresponding main landing gear tyre damage.

The occurrence was rated by the Indonesian National Transportation Safety Committee (NTSC) - the Komite Nasional Keselamatan Transportasi (KNKT) - as a Serious Incident and an Investigation was commenced. Relevant data from both the CVR and the FDR has been successfully downloaded and relevant recorded ATC communications and information on the prevailing weather conditions were also obtained.

It was noted that the 48 year-old Instructor Pilot who was in command and occupying the right hand seat had a total of 16,916 hours flying experience which included 2,216 hours on type. Prior to the investigated flight, his most recent previous flight was one month earlier occupying the left hand seat but it was over six months since he had operated from the right seat. His normal period of proficiency before a routine assessment was required had been extended by the Indonesian CAA for six months beyond its normal end date in accordance with an alleviation issued in May 2020 because he met the specified eligibility conditions. The normal company OM recency requirement for right seat-qualified Captains, which was in accordance with the corresponding regulatory requirement, required that at least one takeoff and landing must have been made from that seat in an aircraft or a simulator in the 90 days prior to any intended further right seat operations.

The 46 year-old Captain under supervision, who was occupying the left hand seat, had a total of 17,130 hours flying experience which included 235 hours on type. He had previously been employed by Thai Lion Air where he had gained his qualification to operate in command on the A330 ten months previously. He had not flown since 1 February 2020 following which he had moved to Indonesian-based Lion Air to operate the same type as Captain. The investigated landing was the first of the five sectors or 25 flight hours “standardisation training” required before he could resume his Captaincy unsupervised at his new employer.

During the preflight briefing, it was noted that the Medan TAF indicated the possibility of a “light thunderstorm and rain” whilst the TAF for Batam, the alternate was much better. With this information in mind, the Training Captain in command, who was going to occupy the right hand seat as PM for the 2½ hour flight, decided to load an additional 1,200 kg of fuel.

After an uneventful flight thus far, with the Captain under supervision acting as PF, the aircraft deviated to the right by about 10 nm to avoid an area of cumulonimbus cloud, following which ATC instructed the flight to proceed to waypoint ‘ZAIDA’, take up the hold and expect an approach to runway 05 at Medan. During this hold, the Captain under supervision suggested that the Training Captain should take over as PF in view of the adverse weather conditions at the airport but he declined and the Captain under supervision continued as PF. The pilots were aware that a company aircraft ahead had gone around due to windshear and that the aircraft following, an Indonesia Air Asia Airbus A320 had requested runway 23 instead of runway 05. On request, ATC advised that the visibility on final approach was 10 km to which the crew responded by saying that something they described as “the big thundercloud” was visible on the approach and also requested runway 23 for landing. ATC accepted the request and provided radar vectors to position the aircraft for an ILS runway 23 approach. The aircraft subsequently reported established on the ILS 23 LOC and a landing clearance was given with the wind was from 240° degree at 20 knots and the runway wet. As the aircraft passed approximately 1,000 feet QNH, the Captain under supervision passed control of the aircraft to the Training Captain and took over as PM. The TWR controller was then heard advising an aircraft further out on the approach that the wind was from 290° at 11 knots.

Passing approximately 500 feet, the AP was disengaged and the PM advised that the wind was from 275° at 6. Then, as the automatic call out of ‘RETARD’ occurred, the PM noticed the aircraft was getting close to the left runway edge and advised the PF to fly right. The aircraft then touched down and the PF used right rudder to realign the aircraft with the runway centreline but the left main landing gear was subsequently found to have departed the runway surface some 370 metres beyond the threshold near to taxiway ‘D’ before fully regaining it after 30 metres and then reaching the runway centreline near to taxiway ‘E’. Once the aircraft speed was down to about 70 knots, the Training Captain handed aircraft control back to the Captain under supervision and the aircraft vacated the runway via taxiway G. The pilot then reported to TWR that on touchdown they had “slightly veered to the left and might have hit a runway light”. Once parked, an engineering inspection found grass in the area of the left main landing gear assembly and deep cuts to the tyres of two of its wheels. A runway inspection was then carried out and two broken runway lights were found. Subsequently, it was found that both the tyre markings and the left main gear tyres themselves had striation marks almost perpendicular to the direction of travel of the aircraft at the time of the excursion (see the second illustration below). There was no evidence that reverted rubber aquaplaning had occurred. 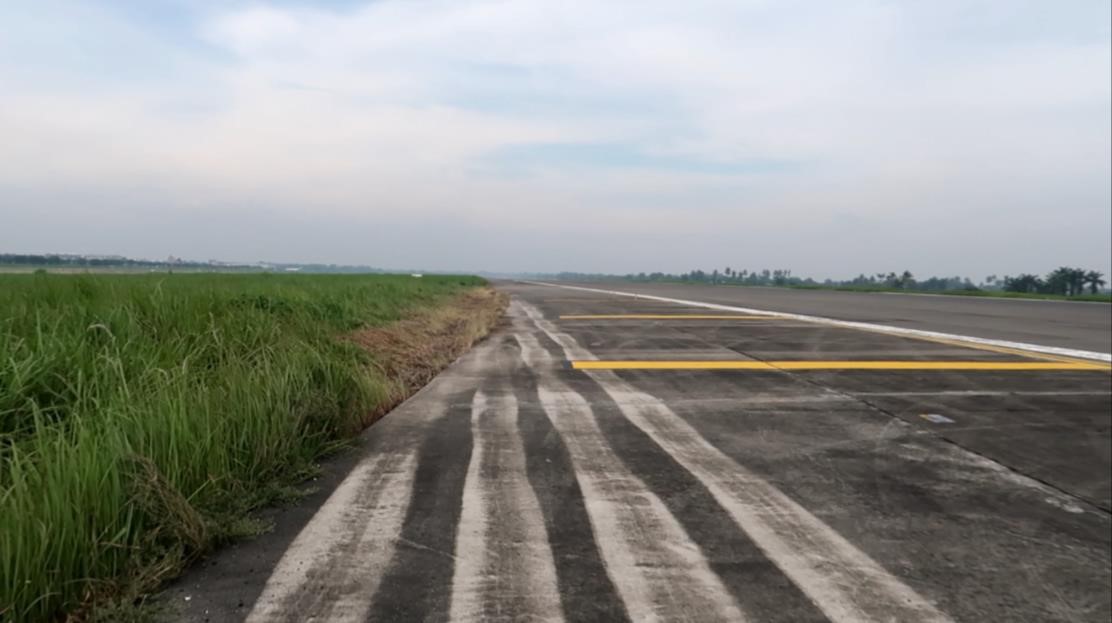 The left main gear tyre marks as it left the paved surface. [Reproduced from the Official Report] 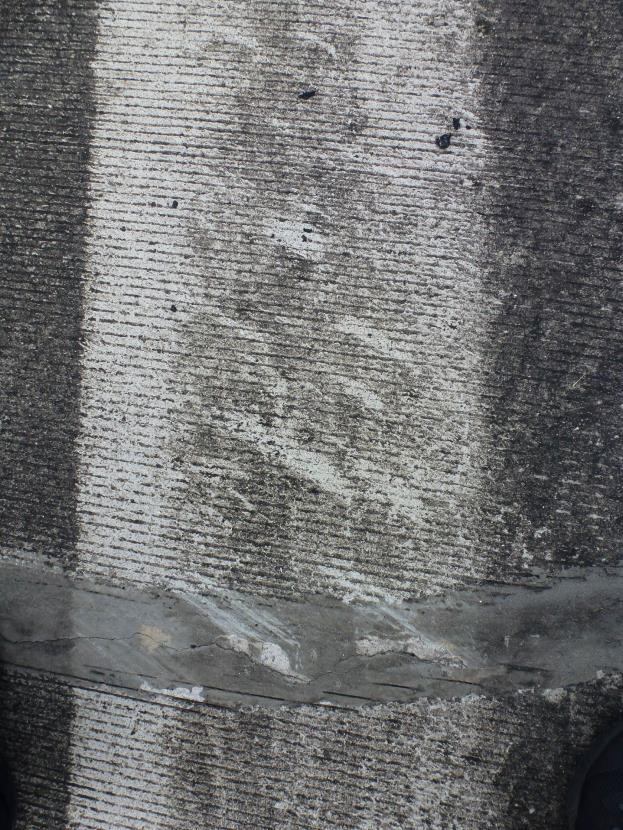 The tyre striation marks on the runway surface just prior to the excursion. [Reproduced from the Official Report]

A SPECI issued for the time of the touchdown gave the surface wind as variable at 11 knots, the prevailing visibility as 700 metres in thunderstorm and rain with these conditions expected to continue temporarily for another half hour. It was noted that the 3,750 metre-long asphalt surface runway was 60 metres wide and equipped with centreline lighting and that the grass adjacent to the runway edge where the excursion had occurred was subject to a monthly cutting regime next due to commence 9 days later. The side force coefficient of runway surface friction was found to be within limits during a routine check carried out just over two weeks prior to the event under investigation.

It was noted that although Lion Air had a fleet of 10 Airbus A330 aircraft, the number remaining in operation during the Covid-19 pandemic which was ongoing at the time of the event had been “significantly reduced”. It was also noted that the operator’s simulator training was carried out by contractors based in Indonesia, Malaysia and Singapore and that travel restrictions had increased the difficulty in maintaining pilot proficiency and recency.

The Lion Air OM was found to require, as per regulatory mandate, that “within the preceding 90 days, a pilot must have made a minimum of three takeoffs and landings in the type of aircraft which he is to operate” and that this requirement may be met by use of “an approved visual simulator”. It also stated that if any pilot does not make the three required takeoffs and landings within any consecutive 90-day period “recency of experience must be re-established as provided for in the Lionair Operations Training Manual (OTM)”. Right hand seat qualified Captains were additionally required within the preceding 90 days to have made a minimum of one takeoff and landing from that seat in the type of aircraft which they were to operate.

It was noted that the Indonesian Directorate General of Civil Aviation (DGCA) which is responsible for the safety regulation of operators, had, on 26 May 2020 issued an exemption from certain pilot proficiency checks and recent experience requirements because of the disruption caused by Covid 19. This was noted to have permitted an aircraft operator to:

The following day, the DGCA had issued a further alleviation to allow the extension of pilot proficiency checks with a maximum period of validity of 6 months where the following conditions could be met:

Two Safety Recommendations have been made at this stage of the Investigation as follows: