On 31 December 2019, an Airbus A330-300 flew a night ILS approach to land on the 60 metre wide runway at Port Harcourt in undemanding weather conditions but became unstabilised just before touchdown when the handling pilot made unnecessary and opposite aileron and rudder inputs for which no explanation was found. Because of this, a late touchdown on the right hand edge of the runway was followed by the right main gear leaving the runway and travelling along the hard shoulder parallel to it for just over 1000 metres before regaining it which caused runway lighting and minor aircraft damage.

On 31 December 2019, an Airbus A330-300 (TC-LOL) being operated by THY Turkish Airlines on a scheduled passenger flight from Istanbul to Port Harcourt as THY3WJ departed the right side of the 60 metre-wide destination landing runway following an ILS approach in night VMC before regaining it after which the rest of the landing roll was completed normally. There was no injury to the 295 occupants but three runway edge lights were damaged and the aircraft sustained damage to three of its main gear tyres, one of which was completely deflated, and minor damage to the internal fan cowl of the right engine and to the right inboard flap.

Departure of the 7 hour flight from Istanbul was delayed for in excess of three hours but once in the air, the flight proceeded uneventfully. When contacted, Port Harcourt APP advised the flight to expect an ILS Approach runway 21 with no delay and passed the latest METAR which gave the wind calm, visibility 5km in haze and no significant cloud.

After twelve minutes on the APP frequency, during which a 21 ILS approach was confirmed, the flight was transferred to TWR and on checking in and reporting that it was established on the localiser it was cleared to land with the wind still reported as calm. The A/THR remained engaged and maintained the applicable VAPP. FDR data showed that the approach was stable almost to touchdown and that the Captain had disengaged the AP at 324 feet agl. The same source also showed that in the final 100 feet before touchdown, several right roll inputs of up to half deflection were made which created a 6.5° roll angle within 9 seconds and initiated a deviation to the right of the runway centreline. Below 45 feet agl, a progressive left rudder pedal input was made but it did not change the established deviation and the thrust was set to flight idle at 40 feet agl.

Almost half an hour after landing, the crew reported to TWR that they had “a flat main gear tyre” and requested a runway inspection. This found both tyre debris and three damaged right hand side runway edge lights located immediately after the rapid exit for runway 03. 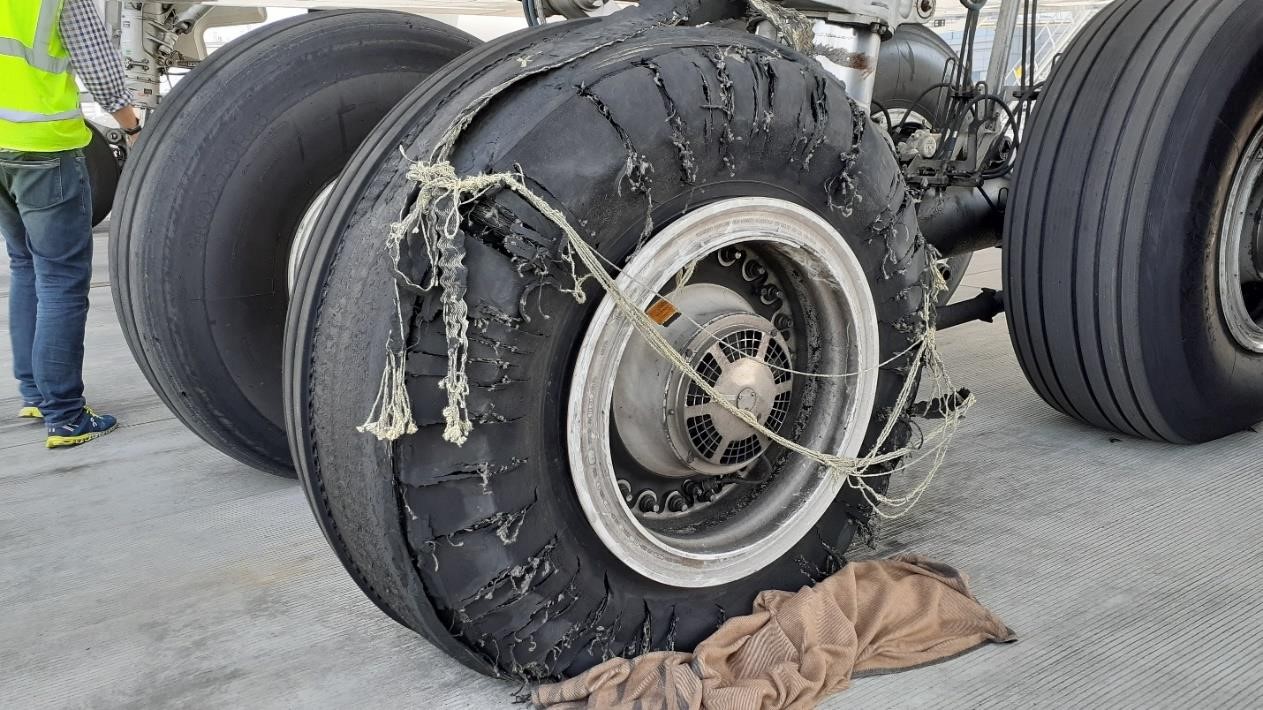 The damaged no 8 tyre. [Reproduced from the Official Report]

Although the TWR advised that the surface wind for landing was calm, reconstruction of the actual wind velocity on final approach carried out by Airbus found that between 1000 feet agl and 200 feet agl, the mean wind velocity was from 278° at 10 knots. It also found that a crosswind component from the right between 1000 feet and 500 feet of 10 knots had thereafter steadily decreased to 2 knots by touchdown. However, this variation did not contribute to the excursion which was entirely due to the combination of right aileron and rudder inputs in the final 100 feet prior to touchdown which were contrary to the guidance on flare and touchdown provided in the Airbus A330/A340 Flight Crew Techniques Manual (FCTM). The Investigation did note that despite the runway being 60 metres wide it only has Cat 1 approach procedures and has no centreline lighting (nor a requirement for any).

The Cause of the Accident was determined as “the extra right aileron and rudder input by the Captain in the last 100 feet (prior to touchdown) resulted in the aircraft drifting to the right of the runway centreline”.

The Final Report of the Investigation was published on 8 July 2021.