On 3 July 2017, an Airbus A330-300 was climbing through 2,300 feet after a night takeoff from Gold Coast when the number 2 engine began to malfunction. As a cabin report of fire in the same engine was received, it failed and a diversion to Brisbane was made. The Investigation found that the engine failure was entirely attributable to the ingestion of a single medium-sized bird well within engine certification requirements. It was concluded that the failure was the result of a sufficiently rare combination of circumstances that it would be extremely unlikely for multiple engines to be affected simultaneously.

On 3 July 2017, an Airbus A330-300 (9M-XXT) being operated by Air Asia X on a scheduled international passenger flight from Gold Coast to Kuala Lumpur as D7207 had just taken off at night when malfunction of the number 2 Rolls Royce Trent 772B-60 engine was indicated. A PAN was declared as part of the crew response and soon afterwards, at about the same time as a report was received from an off duty Company pilot travelling in the passenger cabin of fire seen in the affected engine, its failure was indicated in the flight deck. As per applicable procedures, it was shut down with fire suppression activated, a MAYDAY was declared and a diversion to Brisbane was completed without further event.

An Investigation was carried out by the Australian Transport Safety Bureau (ATSB).

It was established from FDR data that Engine 2 vibrations had increased as the aircraft approached Vr and as it subsequently passed approximately 2,300 feet in the climb, an ECAM ‘ENG 2 STALL’ annunciation appeared accompanied by loud banging noises typically associated with such a stall. The corresponding ECAM actions were commenced and a PAN was declared to ATC. As the climb was continued through 4,000 feet, an ECAM annunciation of ‘ENG 2 FAIL’ appeared and at about the same time, the Purser relayed a message from an off duty Company pilot in the passenger cabin advising of a fire in the affected engine being visible. The ECAM ‘ENG 2 FAIL’ procedure was completed and its fire suppression system activated. The ‘PAN’ was upgraded to a MAYDAY and a diversion to Brisbane was made with an overweight landing on runway 01 completed. After clearing the runway, the aircraft was stopped to allow inspection by the Airport Fire Service and after an ‘all-clear’ was given, it was then taxied to the terminal.

A visual inspection of the departure runway by the Gold Coast airport operator was made and bird remains and engine debris were recovered on runway 32 including one complete carcass and additional debris from another bird. No other foreign objects with the potential to have caused the engine damage were found. Video recordings of the runway at the time of the takeoff were also found to show flashes of flame coming from the rear of engine 2 during the takeoff with the location of these flashes coinciding with the area from where the bird remains and engine debris were recovered. Tissue samples from the bird remains were subsequently identified as from a masked lapwing, a medium-sized bird which weighs between 230 and 400 grams. An examination of the complete carcass by a veterinary specialist concluded that it was unlikely to have been struck by a moving object and its demise had probably been the result of wake vortex. No signs of burning were evident on the other bird which indicated that it had not been ingested into an aircraft engine.

An engineering examination of the failed engine at Brisbane found a single fan blade-tip section with approximate dimensions of 14cm x 12.5 cm missing from one fan blade and the fan rear seal broken into pieces and scattered throughout the bypass areas of the engine. There was also evidence that fire had occurred within the engine. A sample of visible organic debris was taken from the engine in Brisbane and sent for DNA analysis to determine the bird species but the outcome was inconclusive, possibly due to the sample being affected by heat or by storage conditions.

The engine was then subjected to a detailed off-wing inspection and strip down by the engine manufacturer. The results from this inspection in relation to the fan blades included the following:

UV light showing up bird remains on the damaged fan blade. [Reproduced from the original Report] 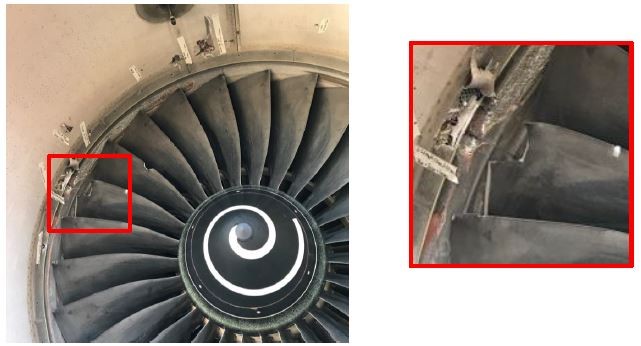 The damaged engine showing the missing tip on the blade principally affected. [Reproduced from the original Report]

Rolls Royce subsequently sought to use mathematical modelling to determine what conditions would be capable of causing such a relatively small bird to damage an engine fan blade. This modelling used the engine speed (81% N1) and aircraft speed (120-140 knots) corresponding to that at the time of the event in combination with variations of strike position (radial height) and angle of incidence (bird orientation). Only one of the modelled scenarios matched the results of the event under investigation and this was a strike with the bird’s longitudinal axis aligned with the relative velocity of the blade at a radial height of 83 per cent - essentially the radial height disclosed by the physical evidence.

It was stated to the Investigation by Rolls Royce that vibration experienced could be attributed to the loss of the blade tip which would have caused the fan to run out of balance when at takeoff thrust. It was also considered that high thrust engine operation with the fan out of balance would most likely have resulted in the outboard section of the fan rear seal being lost due to contact between the rotating and static components with fragments of this seal then entering the engine core leading to “significant damage to the compressors”. This would have created the conditions for the series of compressor stalls which occurred until the crew reduced the engine thrust to idle in response to required response to an ECAM ‘ENG 2 STALL’ annunciation.

FDR data showed that at about the time ‘ENG 2 STALL’ appeared, the engine oil quantity in Engine 2 had begun to reduce from the level previously recorded for both engines. This would be the expected consequence of a loss of clamping across the front bearing chamber elastomeric oil seal due to bolt unwinding. The liberated oil would then have been ignited either by frictional heat from the rubbing seals or relative movement between the front bearing housing and the low pressure roller bearing housing. This oil-fed fire took hold in the cavity between the front bearing housing and the fan disc, causing aluminium alloy components there to melt but the temperature was not sufficient to damage structural engine parts made from materials with higher melting points. It was considered likely that once the oil seal bolts had fully unwound, the changed air pressure and oil feed conditions would have led to the fire self-extinguishing.

The applicable engine certification standards for Trent 700 bird ingestion were contained in (European) Joint Aviation Regulation JAR-E 800, which stated that “when the front of the Engine is struck by a number of medium sized […] or small birds […] there is no unacceptable immediate or ultimate loss of Engine performance, no serious increase of Engine operating temperatures or deterioration of Engine handling characteristics over the full range of Engine operating conditions and no dangerous physical damage” with medium-sized birds weighing up to 700 grams and small birds up to 110 grams.

EDITOR’S NOTE: In addition to remarks included in the Official Report and quoted in this summary, the engine certification standard which the Trent 700 had to meet when at a typical initial climb speed and take off thrust includes “simultaneous ingestion of up to 16 small sized birds of weight 850 gm […] shall not cause the engine to suddenly and completely fail and it shall continue to deliver usable but slowly decreasing minimum thrust over a period of 20 minutes after ingestion”.

It was noted that what occurred to the engine during the investigated event was not what is tested during the medium bird certification test which requires 8 birds of at least 680 gm being fired into the engine at above 168 knot with the bird trajectory longitudinally aligned with the engine. It was also noted that a total of 430 in-service bird strike events had been recorded since the Trent 700 engine was introduced, of which only five had resulted in the loss of any fan blade material and that all except this one had been caused by large birds.

The Conclusions of the Investigation included the following:

Safety Action taken by Rolls Royce as a result of the investigated event whilst the Investigation was in progress were recorded as having included deciding that its Trent 700 project team will review the design of the fan rear seal and the low pressure roller bearing bolts to determine if there is a feasible solution to prevent the loss of a small section of fan blade leading imminently to an engine shutdown.

The Final Report was released on 2 May 2018. No Safety Recommendations were made.