On 26 February 2020, an Airbus A330-300 tailstrike occurred during rotation for takeoff from Zurich and was not detected by the crew who completed the planned 7½ hour flight to Nairobi before learning that the aircraft was not airworthy as a result. The Investigation concluded that the tailstrike had been the direct result of the crew’s use of inappropriate inputs to their takeoff performance calculation on the variable headwind encountered during the takeoff and noted a very similar event had previously occurred to the same aircraft type operated by an airline within the same overall ownership.

On 26 February 2020, an Airbus A330-300 (HB-JHC) being operated by Swiss International Airlines on a scheduled international passenger flight from Zurich to Nairobi and then on to Dar es Salaam as LX294 became airborne in day VMC at an excessive pitch attitude and the occurrence of a tail strike was not recognised by either the flight or cabin crew or by ATC. The flight to Nairobi was therefore completed but on arrival, the station engineer there advised the Captain that the rear fuselage showed evidence of a tailstrike which rendered the aircraft un-airworthy. It was therefore withdrawn from service and the leg to Dar es Salaam was cancelled. After consultation with Airbus, a temporary repair was eventually approved and completed 12 days later.

Shortly after the Scheduled Time of Departure (STD) for the flight, the crew contacted the Clearance Delivery frequency to obtain a SID and, after being offered but declined a takeoff from the takeoff runway in use, 28, (the surface wind was westerly) they were give an Estimated Time of Departure (ETD) of STD +35 minutes for runway 16. However due to intended clearance of wet snow from both runway 16 and runway 28 and aircraft ground de-icing because of  continuing snow showers at the airport it was announced that runway 32 would become the takeoff runway and a new SID was obtained.

The crew then performed a takeoff performance calculation on their EFB which output a CONF 2 takeoff using a reduced thrust (flex temperature-based) setting. On repeating this calculation 20 minutes later based on the new ATIS surface wind of 280° /19 - 32 knots and with windshear being reported at an altitude of approximately 3000 feet QNH (equivalent to 1500 feet aal), it was decided to change to a CONF 1+F takeoff and, in view of the variable wind and the reported runway condition (10% covered with 3mm of slush), to input a 6 knot tailwind and reduce the flex temperature from the maximum possible 35°C to 34 °C. They also decided to takeoff with the engine and wing anti-icing on and the air conditioning packs off. This produced a V1 of 136 KIAS, a VR of 148 KIAS and a V2 of 153 KIAS.

Takeoff clearance was eventually given with a spot wind from 260° at 19-28 knots and it commenced at STD+01:41 hours. Rotation with the control column pulled back to about ¾ of full travel was initiated at VR (148 KIAS) but the airspeed then dropped to 142 KIAS and the PF responded by returning it to about half of full travel which, taken together, resulted in the aircraft attaining a pitch angle of 11.2° within 4 seconds. Two seconds later, at a pitch angle of 13.7° and a speed of 154 KIAS as the main gear was about to lift off, the rear lower fuselage contacted the runway without either the pilots or the rear-stationed cabin crew noticing anything unusual. The flight thereafter was completed as planned without further event.

The Investigation was sought to establish exactly what happened and how this related to the flight crews’ compliance or otherwise with the relevant SOPs. It was noted at the outset that in 2013, an Airbus A330-300 being operated by another Deutsche Lufthansa Group Airline, Lufthansa, had been involved in a very similar tailstrike unrecognised by the crew when departing from Chicago and had also then completed its intended (transatlantic) flight, in this case in a “severely damaged” condition.

It was apparent that the Swiss International Airlines’ recommendation to use CONF 2 as the effective default had been ignored.

In the light of the last point above, the Investigation looked in more detail at the influence of wind velocity inputs on the V speed calculation on the ratio of V2 to VS which must be at least 1.13 and was displayed during use of the EFB for takeoff performance purposes. The following illustration compares the 6 knot tailwind used by the crew with the 16 knot headwind component implied by the actual mean wind during the takeoff of 280°/19 (which was not materially different from the latest METAR/ATIS wind of 260°/17 knots). As would be expected, the V speeds increase with increasing headwind. 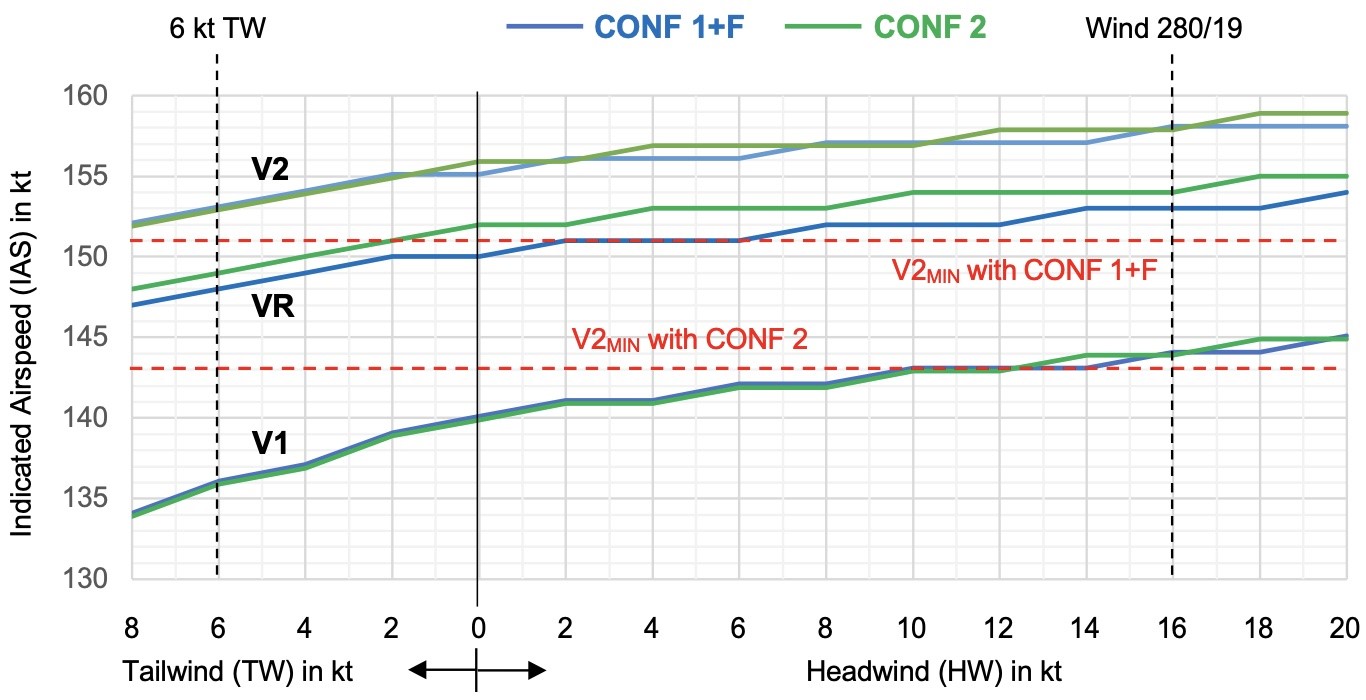 The effect of head/tailwind component on V speeds for the takeoff weight involved, [Reproduced from the Official Report]

However, although the V speeds themselves are not much affected by the chosen flap/slat configuration (CONF), since the VS increases with a lower flap setting, a significantly lower V2/VS ratio applied and this means a lower safety margin in relation to a stall (see the illustration below) as well as, importantly, rotation at a speed much closer to VS.

The effect of head/tailwind component on the V2/Vs ratio and in relation to flap/slat setting. [Reproduced from the Official Report]

Overall, it was concluded that the desire of the crew to increase safety reserves by entering “conservative values” into their EFB takeoff performance calculation had “ultimately produced undesirable effects, namely an increase in the risk of a tailstrike and a reduction of the stall margin”. In fact, the obvious way to create an effective safety reserve when this is considered appropriate is not to make a reduced thrust takeoff but use the maximum permitted rated thrust. It was observed that this decision, not taken appropriately in the investigated event, was “ultimately nothing more than a balancing of safety against economy (safety versus economy)”.

The Investigation noted a previously investigated similar tailstrike to a Lufthansa Airbus A330-300 which was also considered to have been “among other things, a consequence of the selected configuration and the dynamics of the rotation rate” and had also gone undetected by the flight crew and been followed by completion of the planned flight in an un-airworthy aircraft.

Four Contributory Factors to the tailstrike were identified as follows:

The Final Report was approved on 18 October 2021 and subsequently published on 26 November 2021. No Safety Recommendations were made.