On 24 April 2005, an Airbus A340-200 landed short of the temporarily displaced runway threshold at Perth in good daylight visibility despite their prior awareness that there was such a displacement. The Investigation concluded that the crew had failed to correctly identify the applicable threshold markings because the markings provided were insufficiently clear to them and probably also because of the inappropriately low intensity setting of the temporary PAPI. No other Serious Incidents were reported during the same period of runway works.

On 24 April 2005, an Airbus A340-200 (ZS-SLA) being operated on a scheduled passenger flight from Johannesburg to Perth landed short of the displaced threshold on runway 21 at destination in normal day visibility. There was no damage to the aircraft or to fixed equipment on the ground although a warning cone was damaged by impact with the aircraft. It was noted that the aircraft was being operated with an augmented crew.

An Investigation was carried out by the Australian Transport Safety Bureau (ATSB). It was established that the aircraft commander had been PF for the approach and landing at Perth and found that all three flight crew were experienced overall but all three had similar and relatively limited experience of the A340.

The displaced threshold was required to facilitate the reconstruction of runway 06/24 and taxiway intersections at Perth airport (see the diagram below). Prior to commencement of the programme of work, the airport operator had issued a description of the intended works which was distributed to all operators using Perth including the operator of the incident aircraft. The work notified included the reconstruction of the runway 03/21 intersection with runway 06/24 with work to be scheduled between 0130 and 0930 on each working day which would involve the threshold of runway 21 being displaced by 1331 metres to the south and the Instrument Landing System (ILS) GS for runway 21 being unavailable. The effect of this displacement of the landing threshold would be to reduce the available runway length by almost 40%. A temporary precision approach path indicator (Visual Approach Slope Indicator Systems) would be installed on the eastern side of runway 21 to provide visual guidance for a 3-degree approach to the new touchdown zone taking account of the position of the displaced threshold. It was stated that this temporary PAPI would be situated 395 metres to the south of the temporary threshold. It was further stated that “visual ground aids associated with the works would be supplied, marked, and located” in accordance with the requirements of the Aerodromes section of the Manual of Standards of the Safety Regulator, the Civil Aviation Safety Authority (CASA). 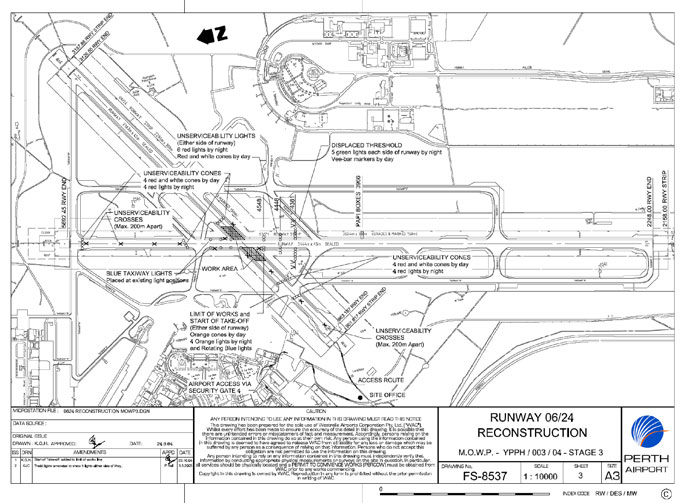 It was found that this description of intended works had also included details of Notice To Airmen issue which it was advised would be initiated through the Australian NOTAM Office 48 hours before the commencement of each stage of the works. The NOTAM for Stage 3 of the works during which the incident had occurred included “details of the linear displacement of the threshold of runway 21 and that the displaced threshold would be marked by five green lights on either side of the runway and also with V-bar markers”. This NOTAM also advised that the runway 21 ILS GS would not be available and gave the location of the temporary PAPI with the advice that it would be set to “Stage 2” intensity with five minutes notice required to change this intensity to an alternative setting.

It was noted that there was also a CASA ‘Manual of Operational Standards’ stated that “temporarily displaced thresholds on runways that do not display permanent threshold markings shall be marked by V-bar markers on each side of the runway” - which had been done. At the time of the incident, four red and white cone-shaped unserviceability markers were also in position over the threshold markings and four similar red-and-white cone-shaped unserviceability markers had also been placed diagonally across runway 21 within its out-of-use section immediately to the north of its intersection with taxiway D.

The initial part of runway 21 not available for landing and take off - between the permanent threshold and the intersection with taxiway D - was marked with four unserviceability crosses. However, from that point until the location of the displaced threshold, crosses of the same type were placed adjacent to the runway rather than along its centreline because this part of the runway 21 was still available for aircraft use when taxiing to the take-off point.

It was confirmed that the A340 flight crew had been supplied with the NOTAM about the runway 21 work in progress in their pre-flight briefing package. Their clearance to establish on a visual approach to runway 21 had been given when the aircraft was at about 4,000 feet. The flight crew subsequently stated that “although they were aware of the displaced threshold, they could not identify the displaced threshold markings during the approach”. They had asked TWR to confirm the location of the displaced threshold and had been (correctly) advised that it was to the south of the runway 06/24 intersection. The PF reported having then adjusted the flight path accordingly but “the crew then observed what they perceived to be a transverse white line across the runway just to the north of the intersection of runway 06/24”.

Because this line was close to the intersection of runway 06/24 referred to by the controller, the crew reported assuming that it was the displaced threshold and, having seen that the runway beyond was clear of obstructions, the PF landed the aircraft just past the line. It was determined that the actual touchdown point of the aircraft was about 670 metres short of the V-bar marked displaced threshold and just over 1000 metres from the temporary touchdown zone for which the temporary PAPI was set. The PF reported having recognised at a late stage that line which had been mistaken for the displaced threshold was actually a series of cone-shaped unserviceability markers. One of these was found to have been run over and damaged by the aircraft but the aircraft itself was undamaged.

The crew subsequently stated that “at no stage during the approach did they see any other markings that delineated the displaced threshold” and that “they could not distinguish the V-bar markers referred to in the NOTAM”. It was considered that “their perception that the unserviceability….markers were a line signifying the displaced threshold was probably heightened by the fact that it (marked the end of) the area of runway surface that was marked by unserviceability crosses”.

In respect of the visual glide slope guidance provided by the temporary PAPI to the correspondingly displaced TDZ, it was considered that the fact that the aircraft landed short of the displaced threshold meant that the final approach had been conducted below the correct approach slope without the corrective action which would be expected if the crew were aware of the PAPI. It was concluded that it was possible that the crew may not have been looking far enough down the runway to notice it. It was also thought that since “the PAPI was only set to Stage 2 in fine, daylight, overcast conditions, when Stage 4 was the optimum setting for those conditions” it may been insufficiently conspicuous as well as being “outside their area of concentration”. It was noted that there had been no request to alter the intensity of the PAPI setting during the approach.

The Investigation sought to explain the flight crew error by reviewing the way a PF conducts an approach to land. This was characterised as “a pilot attempts to create a standard approach situation using information from, among other things, cockpit instruments, glide slope guidance and runway aspect and markings” and it was further suggested that “when a pilot sees the runway picture (they) expect to see during (their) scan of these inputs, any unobtrusive temporary markings outside the normal areas of concentration may not (provide a sufficient prompt to generate a response) to them”. It was further observed that “temporarily displaced threshold markings must compete with normal threshold markings, centreline markings, fixed distance and touchdown zone markings, visual glide path information and all the other visual inputs which tend to guide a pilot to a touchdown zone close to the approach end of the visual runway”.

The corollary of this proposition was seen to be that “these existing cues must be disrupted and the temporary markings made obvious enough to direct the pilots’ attention to the displaced threshold.” The Investigation did not discuss the apparent lack of effective flight deck monitoring in facilitating the incident outcome.

The Conclusion of the Investigation was that “in this occurrence, the temporarily displaced threshold markings and the light signals from the temporary PAPI on the Stage 2 setting were not of sufficient salience to compete with the other visual inputs to the crew. Consequently, the crew inadvertently misidentified the position of the displaced threshold”.

It was noted that the ATSB had not received any other reports of aircraft landing short of the displaced threshold on runway 21 at Perth during the period in which the Stage 3 works were in progress.

The Airport Operator amended its procedure for daytime opening of the displaced threshold on runway 21 two days after the incident to require the temporary PAPI to be set to Stage 6 intensity when the runway lights were turned off at the end of each night.

The Final Report of the Investigation was published on 27 October 2005. No Safety Recommendations were made as a result of it.