On 5 July 2014, an Airbus A340-300 taxiing for departure at Barcelona was cleared across an active runway in front of an approaching Boeing 767 with landing clearance on the same runway by a Ground Controller unaware that the runway was active. Sighting by both aircraft resulted in an accelerated crossing and a very low go around. The Investigation noted the twice-daily runway configuration change made due to noise abatement reasons was imminent. It was also noted that airport procedure involved use of stop bars even on inactive runways and that their operation was then the responsibility of ground controllers.

On 5 July 2014, an Airbus A340-300 (LV-FPV) being operated by Aererolineas Argentinas on a scheduled passenger flight from Barcelona to Buenos Aires as ARG 1163 taxied across runway 02 en route to its departure runway in front of a Boeing 767-300 being operated by UTair on a passenger flight from Moscow Domodedovo to Barcelona which was on short final to land on the same runway. On sighting of the conflict, which occurred in day Visual Meteorological Conditions (VMC), the 767 initiated a low go around as the A340 accelerated to expedite vacating the runway.

An Investigation was carried out by the Spanish Civil Aircraft Accident and Incident Investigation Commission (CIAIAC). By the time the event was reported, "it was no longer possible to obtain information from the Flight Data Recorder (FDR)/Cockpit Voice Recorder (CVR) of either aircraft". However all relevant ATC recordings were available and were considered sufficient.

The five controllers on duty at the time were all Spanish native speakers and were as follows:

It was established that preparations were being made for the routine 0700L runway configuration change from 'night' to 'day' operations required to mitigate noise over sensitive areas around the airport. The A340 was usually an evening rather than an early morning departure but it was delayed inbound. It was initially cleared to taxi to runway 07L, an exception to the usual use of runway 07R for night departures due to the need for longer TODA of 07R. With the First Officer as PF, they began to taxi as shown on the diagram below. Then, when on taxiway 'D', ATC GND advised that take off would be on the opposite direction 25R (since the change to day time runway configuration would have taken place by the time take off would occur). The Captain took over control temporarily so that the First Officer could reprogram the FMS. They were asked to "cross runway 02 without stopping and then to turn right onto taxiway M and to stop at holding point M5". 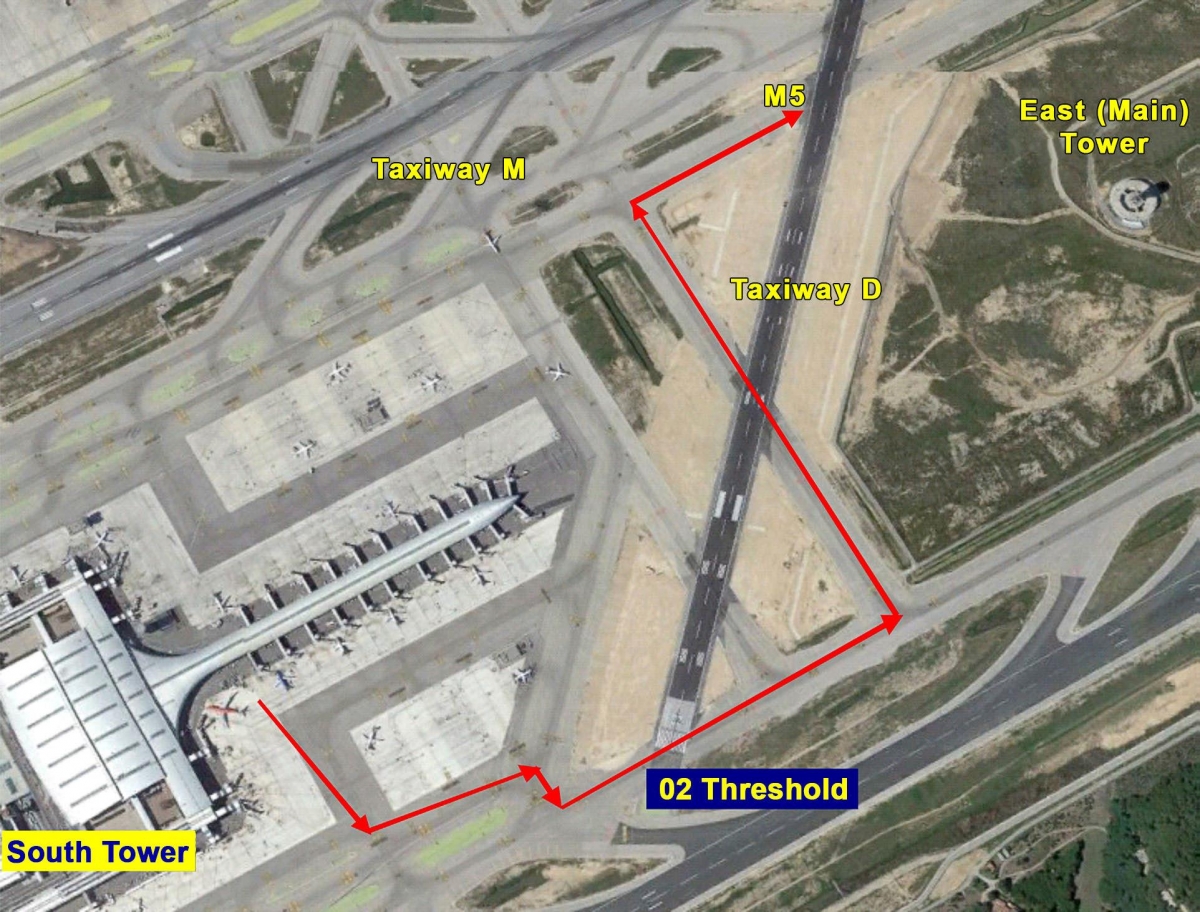 One minute after this, the 767 crew were cleared to land on runway 02 by TWR at exactly the same time as GND cleared the A340 to "cross runway 02 where it intersects taxiway M" so as to continue taxiing towards the holding point for runway 25R. Two minutes after this, the A340 crew had reached M5 but, since the stop bar was lit, queried this with GND. In response, the controller switched off the stop bar and cleared the aircraft to continue. As the aircraft entered the runway, the Captain reported having switched on the strobe lights and asked the crew to check if they were "clear" since "with the 110º angle between taxiway M and runway 02, he was unable to see clearly to their right". At that moment, he stated that the First Officer and the relief pilot who was occupying the supernumerary crew seat behind him (i.e. the two pilots were on the right hand side of the flight deck) warned him of an approaching aircraft on short final. He stated that this had "caused him to accelerate his crossing of the runway" and noted that "the (same) two pilots then told him that the aircraft had gone around". The rest of the taxi to holding point M1 for runway 25R, was reported to have been "uneventful, with no remarks from GND control".

The 767 Captain subsequently stated that in the vicinity of 1,000 feet aal, "he had noticed an Airbus A-340 approach the holding point for runway 02" i.e. to the left of the runway. He reported that "when he realised the A340 was not going to hold short of the runway and that it was continuing to taxi, he decided to go around" and that ATC had been notified accordingly. He estimated that they had been "between 200 and 300 ft agl" at the time a go around was initiated but with no FDR data, there was no data on the actual separation achieved. The Investigation noted that the height of the A340 tail plane is just over 55 feet. Radar recorded position data showed that "the minimum horizontal distance separating (the two aircraft)" as the A340 began to enter the runway during the incursion was 1.15 nm and the minimum vertical distance separating them at that time was 200 feet. The TWR controller in position at the time stated that "when (the 767) was over the threshold, he saw it go around and as he followed it visually, he stood up and looked to his right. It was then that he saw (the A340) crossing runway 02 where it intersects with taxiway M". He added that "he was shocked and he even became upset and let out a scream when he realised what had happened". It could not be established exactly where the 767 had commenced its go around but landing performance assumes that aircraft will be at 50 feet above the runway as they cross the threshold.

The Investigation was advised by the ANSP that "consideration is being given to allowing only the (TWR- runway) controller to turn off the stop bars" but this statement did not clarify whether the idea was to pass control of stop bars on non-active runways to these controllers or cease their use for such runways.

The Human Factors aspects of the controller errors made were also examined with reference to the SHELL and GEMS (Generic Error Modelling System) models.

The Investigation formally concluded that the Cause of the Serious Incident had been "a series of mistakes made at various control posts that were not detected in time due to a lack of coordination and due to the fact that they occurred during the night time to day time runway configuration change that takes place at the airport every day at 07:00".

The Final Report was approved on 26 October 2015 and subsequently made available in English translation.