On 19 August 2017, an Airbus A340-300 encountered significant unforecast windshear on rotation for a maximum weight rated-thrust night takeoff from Bogotá and was unable to begin its climb for a further 800 metres during which angle of attack flight envelope protection was briefly activated. The Investigation noted the absence of a windshear detection system and any data on the prevalence of windshear at the airport as well as the failure of ATC to relay in English reports of conditions from departing aircraft received in Spanish. The aircraft operator subsequently elected to restrict maximum permitted takeoff weights from the airport.

On 19 August 2017, an Airbus A340-300 (F-GLZO) being operated by Air France on a scheduled international passenger flight from Bogotá to Paris CDG as AF429 experienced significant windshear as rotation for takeoff was attempted and the commencement of climb in night IMC was then not possible until almost the end of the runway with angle of attack flight envelope protection being briefly activated. The associated 15 second reactive windshear warning ceased as the aircraft approached 200 feet agl and the remainder of the flight was without further event.

After being initially informed of the event by Air France, preliminary data analysis by both Air France and Airbus led the French Civil Aviation Accident Investigation Agency, the BEA, to classify it as a Serious Incident. The Colombian Safety Investigation Authority (GRIAA) were informed, asked to delegate the investigation to the BEA and agreed to the request. Relevant recorded ATC, meteorological and flight data were available.

The flight crew involved, all of whom were present on the flight deck for the takeoff under investigation, consisted of a Captain and two First Officers. As their performance of the takeoff was not considered relevant to the subject of the investigation, their pilot experience was not recorded.

The general context of the flight was as usual for Bogotá which is at a high altitude - 8,360 feet amsl - so that even with a 3,800 metre long runway, the takeoff performance of the A340-300 is sensitive to changes in the wind, temperature and runway condition. Whilst the crew were preparing the flight, it became clear that the prevailing weather conditions at that time meant that with the required fuel load, none of the four tonnes of checked baggage could be carried and they were advised by the airline’s operational control centre to delay the departure until conditions improved. Eventually this occurred, in particular a decrease in the ambient temperature from 18°C to 15°C which was enough to allow the flight to carry all the baggage.

Following engine start, the flight was cleared to taxi to the holding point for runway 13R. After waiting there for about ten minutes, the crew decided to shut down two engines to conserve fuel but as they did that, TWR controller asked if they could take off with a storm present at the airport to which the crew responded that this was not possible. A discussion then took place in Spanish between the same controller and an Avianca flight during which the controller said that from his position, he could not see the storm. However, this flight accepted a takeoff clearance and when subsequently asked by the controller, its crew reported only the presence of rain at the end of the runway without mentioning anything else. In the absence of any instructions from the controller, the A340 crew who had not understood the exchanges between the controller and the Avianca flight because they had taken place in Spanish, asked the controller for an explanation and in response were cleared to line up on runway 13R although the crew reminded him that they would have to restart the two engines which had been shut down earlier. The A340 Captain reported that his crew had monitored the path of other aircraft which had taken off on the Navigation Display (ND) and had observed that none of them had altered their heading immediately after takeoff which, had they done so may have indicated the presence of a storm.

Almost 20 minutes after arriving at the runway 13R hold, the A340 crew reported that they were ready for takeoff which the controller acknowledged and asked them to remain there. A couple of minutes later, a clearance to line up behind a departing Avianca flight was given. After becoming airborne, the crew of this flight reported (in Spanish) that they had experienced “quite heavy rain on the last quarter of the runway” but this information was not relayed in English by the controller and shortly afterwards, the A340 was cleared for take-off. The Captain subsequently reported having observed the wind sock indicating a complete calm at the time of take-off which was consistent with the subsequently-obtained and similarly timed reading from the anemometer at the threshold of runway 13R.

During the takeoff roll, onboard equipment does not allow the headwind component to be sensed until around 110 KCAS. Thereafter, the headwind component sensed was recorded as increasing from 3 knots to 11 knots by the time VR (138 knots) was reached. On reaching VR, the PF initiated rotation with a side stick input of around three-quarters of maximum deflection. Between the start of rotation and the moment when the main landing gear became airborne, the 11 knot headwind component changed to a 12 knot tailwind component and the calibrated airspeed decreased by 6 knots. After lift-off, the initial rate of climb was imperceptible as the tailwind component continued to increase to 25 knots. Pitch attitude remained between 11° and 13° and in the first six seconds airborne, the calibrated airspeed decreased to a minimum of 128 knots which was 13 knots below Lowest Selectable Speed (VLS). Only at this point did the Flight Management Guidance and Envelope Computer (FMGEC) detect windshear and generate a reactive windshear warning. The height above the runway remained stable at around 5 feet despite the PF continuing to apply the same nose-up input which resulted in a 13° pitch angle. 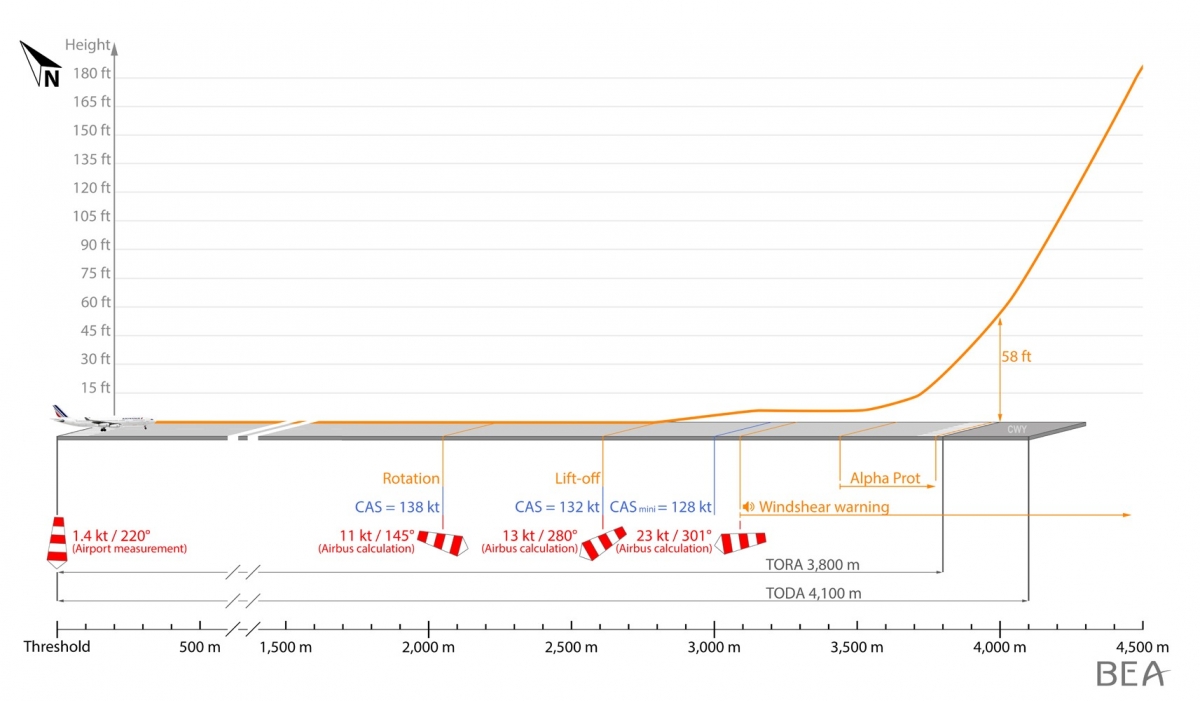 The annotated path of the aircraft during and immediately after lift-off. [Reproduced from the Official Report]

The angle of attack continued to increase and ‘Alpha Prot’ was activated and remained active for four seconds until the sensed tailwind component began to decrease. Thereafter, the calibrated airspeed and rate of climb started to increase. The upwind runway threshold was overflown at 58 feet agl thus exceeding the 35 feet agl regulatory requirement and safely clearing referenced climb out obstacles. After 21 seconds airborne, the reactive windshear warning ceased with the aircraft at 193 feet agl and pitch decreasing through 13° and five seconds after this the V2 of 145 KCAS was reached passing 258 feet agl. Before leaving the frequency, the crew reported the windshear to the controller and the crew of the next flight for takeoff decided to hold their position for three minutes as a precaution. The remainder of the A340 flight was completed without further event.

The BEA recreated the takeoff based on recorded flight data - see the animation below.

In addition to the sensed wind velocity available from recorded flight data, recorded wind velocity measured at 10 second intervals was also available from anemometers located at each end of Bogotá’s two parallel runways. In the ten minutes prior to the takeoff the runway 13R (and runway 13L) threshold wind speed was stable at around 2 knots and from a direction which varied between 360° and 210°. However, at the same time, at the other end of the takeoff runway, whilst the wind direction had hardly changed, it had steadily increased to a headwind component of almost 20 knots by the time of lift-off. It was observed that awareness of differences in wind velocity between the two ends of a runway in the period around the takeoff “could alert both flight crews and controllers to the possible presence of windshear”. However, whilst ATC had continuous real time access to this data, it was noted that although fight crew had equivalent access whilst in their flight briefing room, once they had left it, they were reliant on ATC to relay it when relevant.

The aircraft was equipped with both predictive and reactive windshear detection systems. Whereas the reactive system, which relies mainly on angle of attack and the wind velocity sensed by the aircraft systems, had functioned as would be expected, the complimentary predictive system had not. The latter analyses weather radar returns as a means to estimate air movement ahead of the aircraft and then derives a risk factor based on the wind velocity sensed by the aircraft but it was not possible to determine why it was not activated because “the parameters taken into account by the system were not recorded and because it was not possible to determine the weather conditions with enough accuracy”. The existence of various ground-based systems which can detect the presence of windshear close to an airport was noted. These include LLWAS, TDWR and LIDAR but Bogotá is not equipped with such systems.

Air France all fleets OFDM data was found to have recorded 21 takeoff or initial climb windshear events in a 32 month period ending on the date of the event under investigation which represented an approximate rate of occurrence of 1 per 33,000 flights with the windshear experienced during the investigated event being both the greatest in terms of tailwind variation and the one occurring at the lowest height. However, it was noted that Air France has not recorded any other windshear events at Bogotá in the 39 month period ending in March 2018.

The Conclusions of the Investigation were, in summary, as follows:

When a headwind component suddenly changes to a tailwind component and is associated with a downdraft before or shortly after the rotation as was the case in this event, the consequent reduction in airspeed and lift creates a risk of loss of control which may lead directly or indirectly to collision with terrain or obstacles. When rated rather than reduced thrust has been set for the takeoff as in this case, there are few options available which will restore normal safety margins. If automatic flight envelope protection is available, particularly against excessive angle of attack, then the crew are able to apply full nose up control input without the risk of stall. However, the main opportunity to limit these risks occurs before such windshear is encountered.

Pre flight briefing information available to the flight crew did not contain any message indicating the presence of windshear. In addition, the aircraft Predictive Warning System (PWS) did not detect the windshear despite its strength, its location on the aeroplane’s axis and the presence of rainfall. The crew were therefore reliant mainly on information from ATC prior to beginning their takeoff.

Safety Action taken by Air France as a result of the Investigation of this event was noted as having included restricting maximum takeoff weight on the basis that had windshear occurred after V1, the aircraft would have then been late in reaching VR. By reducing the risk which may arise in the event of a longer than expected takeoff roll, the aircraft control risk associated with hazardous windshear during takeoff was also indirectly reduced.

The Final Report was published simultaneously in English translation and in the (definitive) Spanish language version on 16 December 2019.