On 11 August 2012, the augmenting crew member in the flight deck of an Airbus A340 about to join final approach to Zurich in Class 'C' airspace as cleared suddenly saw a glider on a collision course with the aircraft. The operating crew were alerted and immediately executed a pronounced avoiding manoeuvre and the two aircraft passed at approximately the same level with approximately 260 metres separation. The Investigation attributed the conflict to airspace incursion by the glider and issue of a clearance to below MRVA to the A340 and noted the absence of relevant safety nets.

On 11 August 2012, an Airbus A340-300(HB-JMN) being operated by Swiss on a scheduled passenger flight from San Francisco to Zurich as SWR39 came very close to colliding with an ASW 20 glider (HB-1519) as it joined final approach at destination in day Visual Meteorological Conditions (VMC) whilst over Germany in accordance with its Swiss air traffic clearance. Only immediate and very positive avoiding action created minimal separation.

It was established that, with the Airbus passing 4700 feet Altimeter Pressure Settings for 4000 feet at 248 knots and about to join the Instrument Landing System (ILS) Localiser for runway 14 at Zurich, the augmenting crew member observing the approach from the central supernumerary crew seat suddenly saw a glider at the same altitude on a collision course. The operating crew were immediately alerted and the First Officer, designated PF took avoiding action. The Airbus was flying in accordance with its clearance from the Zurich APP controller but the glider was found to have entered the Class 'C' TMA in which the conflict occurred without permission.

Recorded radar data showed that "a pronounced avoidance manoeuvre" by the A340 was made 5 seconds prior to the closest proximity and had involved "a maximum bank angle of 36 degrees to the left and an increase in attitude to approximately 5 degrees, which generated a normal acceleration of 1.6 g". It was found that 13 seconds before the closest proximity, the glider had begun "an abrupt right-hand turn as an avoidance manoeuvre". The two aircraft subsequently "passed at approximately the same height at a lateral distance of approximately 260 metres" (850 feet) ten seconds after the A340 had initiated avoiding action. The situation is depicted on the diagram below included in the Official Report. 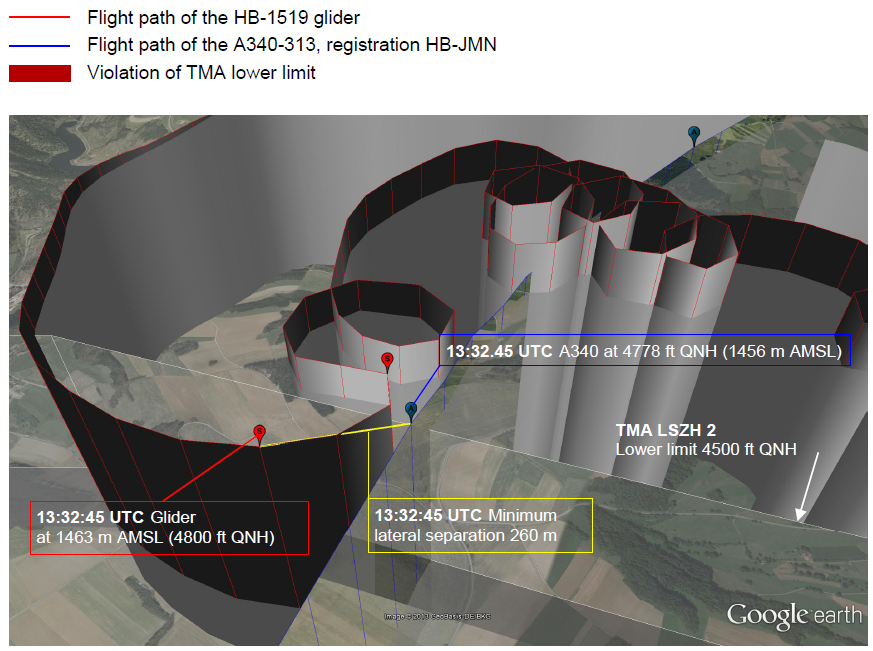 It was considered that the recorded flight paths of the two aircraft over the less than 15 seconds which had elapsed from the initiation of avoiding action until the position of closest proximity showed that "neither avoidance manoeuvre in isolation was decisive in avoiding a collision". It was also concluded that the dynamics of this encounter "clearly indicate(d) that that there are few opportunities for action to avoid a collision (when) in a relatively slow moving aircraft."

In respect of the danger posed to large transport aircraft by airspace incursions undetectable to radar surveillance or Airborne Collision Avoidance System (ACAS), it was observed that it was very difficult for the crew of a commercial aircraft to visually detect a potentially conflicting glider without prior warning since "it is almost impossible to detect small objects with low contrast to their background". It was considered that in the investigated incident, "detection of the glider was certainly helped by the fact that it was turning and that its bank angle changed abruptly, as humans can detect moving objects better than stationary ones". It was concluded that "the role of the observing pilot is likely to have been decisive."

After the glider pilot had failed to file a report or come forward in response to appeals from the Investigation, he was eventually traced and was reportedly cooperative thereafter. He stated that his airspace incursion had been intentional because "while circling….I needed some height for the onward flight." It was found that after landing at the Bohlhof glider airfield (from which he had earlier taken off) following the incident, the glider pilot "did not report the serious incident to the authorities or the club management". However, when, a few days later, "the flight data of all aircraft which had taken off from or landed at Bohlhof…on 11 August 2012 were inspected by the club management", he stated that he had "then informed the club management that he had been involved in the serious incident". It was found that he had been a member of the Bohlhof Gliding Club since 1968 "and was familiar with the airspace structure around the airfield". An analysis of the flights he had made between 15 June 2011 and 11 August 2012 showed "that he had flown into the (Zurich TMA controlled airspace) without verifiable clearance on at least five flights".

It was noted that the glider involved had not been visible on primary radar and, since it was not equipped with a transponder, had also not been visible on secondary radar or triggered an Short Term Conflict Alert (STCA) activation either. It was equipped with the FLARM collision avoidance system commonly carried by gliders in the area but only operative between aircraft carrying such equipment.

Also, the glider was equipped with a navigation computer and an older generation Global Positioning System (GPS) navigation system which did not display maps or give aural and visual warnings when approaching airspace boundaries. It was noted that these more advanced systems would have given an aural warning of the form "one hundred metres below airspace Charlie" which would need to be acknowledged by the pilot to prevent constant repetition.

The Investigation reviewed radar vectoring practices at ZRH APP in relation to the presence of the Temporary Reserved Area below the TMA which facilitated approaches to Bohlhof. It was noted that "operations at Zurich Airport have influenced the operation of Bohlhof glider airfield for quite some time, the first flight restrictions (having been) enacted in 1956". The Investigation reviewed ATC practice in respect of descent clearances in the TMA for aircraft being positioned for approach to runways 14 and 16 and noted that "according to the ATMM Switzerland…the vertical minimum distance from the base of the TMA for IFR aircraft is 500 feet" and that controllers have to "guarantee this minimum distance". In the case of this airspace, "this means that the limit below which an aircraft….may not descend is 5000 ft QNH when flying IFR, so thatif the ATCO issues an aircraft with an altitude which is lower than this limit, he must monitor the vertical flight path such that the aircraft does not descend below 5000 ft QNH". This requirement was not met in the case of the A340 involved in the investigated incident and further analysis of Zurich APP radar data indicated that this had not been an isolated instance.

The Investigation established that the investigated serious incident was not an isolated case and noted that "various dangerous convergences in connection with gliders have been recorded in recent years". Eight recorded similar conflicts in the controlled airspace around Zurich Airport were found have occurred between May 2008 and June 2011 and it was noted that "several lines of evidence suggest that there are a larger number of unreported cases in addition to these documented cases".

The Investigation made the following Safety-critical Findings in relation to the context in which the investigated event had taken place:

The Investigation attributed the Cause of the near collision to the fact that a glider, without a respective clearance, was in airspace class C in which a commercial aircraft was directed below the minimum radar vector altitude.

The Investigation also identified various Factors relating to the near collision:

Systemic Risk Factors which were neither causal nor contributory:

Two further Recommendations were made at the conclusion of the Investigation as follows: