On 27 November 2010, a Finnair Airbus A340-300 unintentionally attempted a night take off from Hong Kong in good visibility from the taxiway parallel to the runway for which take off clearance had been given. ATC observed the error and instructed the crew to abandon the take off, which they then did. The Investigation attributed the crew error partly to distraction. It was considered that the crew had become distracted and that supporting procedures and process at the Operator were inadequate.

On 27 November 2010, an Airbus A340-300B being operated by Finnair on a scheduled passenger flight from Hong Kong to Helsinki with a relief pilot occupying the supernumerary crew seat began its take off roll at night in normal visibility from a taxiway parallel to the runway from which take off clearance had been given by ATC. The ground movement controller noticed the error on his Advanced Surface Movement Guidance and Control System screen and alerted the TWR controller who ordered the crew to stop. The aircraft came to a stop after travelling 1400 metres with no injury to the occupants or damage to the aircraft or ground facilities. After the overheated brakes had cooled, the same three man flight crew operated the aircraft to the planned destination.

An Investigation into this Serious Incident was carried out by the Accident Investigation Division of the Hong Kong SAR Civil Aviation Department. DFDR data was available for the use in the Investigation but Cockpit Voice Recorder (CVR) data had been overwritten because it was not downloaded after the event and the aircraft had subsequently departed again for the planned destination. It was noted that due to runway maintenance taking place on runway 25L/07R at a relatively quiet time, single runway operation prevailed. It was also confirmed that the runway and taxiway lighting, marking and signage system was fully compliant with current ICAO SARPs

It was established that the aircraft had been cleared to taxi from the main terminal area at the eastern end of the airport to the Holding Point A1 for Runway 07L via taxiway ‘B’, one of two parallel taxiways on the south side of runway 07L. When the aircraft was approaching the western end of taxiway ‘B’, take off clearance was given. On reaching the end of taxiway ‘B’, the aircraft made the normal right turn onto taxiway A1 towards the runway but before it reached the runway, it took a premature right turn onto taxiway ‘A’, a second taxiway parallel to the runway located between the runway and taxiway ‘B’. Once the aircraft was on the same alignment as the runway, it began a rolling take-off on taxiway ‘A’. The Ground Controller detected this with the aid of their A-SMGCS and alerted the TWR controller who immediately instructed the aircraft to stop rolling. It did so and came to a stop abeam taxiway ‘A5’, approximately 1400 metres eastwards along the taxiway.

DFDR data showed that the ATC stop call had been made 11 seconds after the aircraft started to roll and after a further 6 seconds, the rejected take off was initiated. The aircraft then took 14 seconds to stop after achieving a maximum speed of 75 knots. 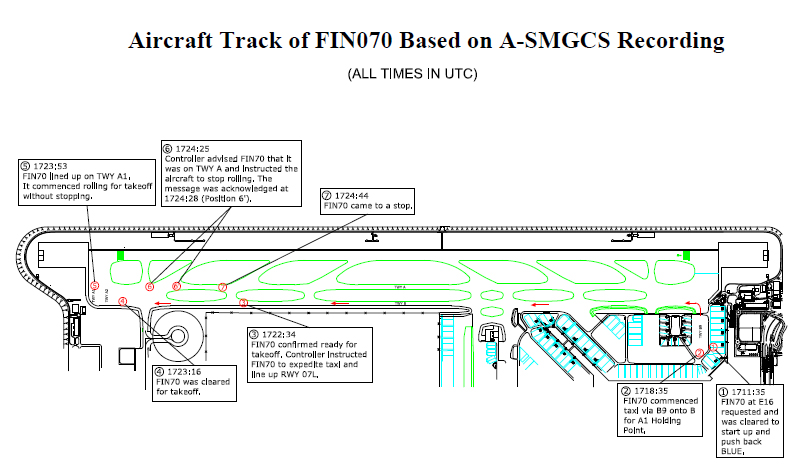 Aircraft track, reproduced from the Offical Report. Click to enlarge

After allowing sufficient time for brake cooling, the flight departed for the intended destination 50 minutes later with the same crew. No comment was made by the Investigation on this continued operational duty by the incident crew - many operators would have required that alternative crew be found for the second departure pending an internal review of the event.

It was found that, in accordance with Finnair policy, only the Captain was trained to taxi the aircraft. Since the incident flight was to take place with the First Officer as PF, this procedure required transfer of control to take place once lined up on the runway - in this case for a rolling take off. Such a transfer of control whilst the aircraft was moving was in accordance with Finnair procedures.

It was also found that the required stowage of the EFBs prior to completion of the taxi checklist effectively meant that the opportunity for checking ground position by reference to a chart was removed prematurely even though a hard copy was, in theory, available. There was also some concern about the ergonomics of EFB stowage arrangements for the operating pilots.

It was noted that the specific duties of the Relief Pilot whilst occupying a supernumerary crew seat in the flight deck during the departure and arrival phases of the flight were not clearly defined in Finnair operating procedures. In the absence of such a definition, it was considered that “all three pilots had the general understanding that the Relief Pilot had a role to monitor the operations, including during the taxiing phase”. However, it was also considered that the neither the position of the occupied seat at the rear of the flight deck and the consequently limited view of the external environment nor the fact that the Relief Pilot had not been trained for ground taxi as operating crew was conducive to effective monitoring.

Three previous similar events of attempted take off on Taxiway ‘A’ were found to have occurred since the opening of the airport in 1998. In the first two incidents, the pilots had realised their error and rejected the take-off. In the third incident, the error, as in this latest case, had been promptly detected by ATC and a stop take off call issued. As with the incident under investigation, the previous three events had all taken place after midnight, in good visibility, during a period of slack traffic when there was no time pressure to begin take off, when all ground equipment and lighting was serviceable, after the aircraft had taxied along taxiway ‘B’ to enter runway 07L at taxiway A1 for take off and when the take off clearance had been issued before the aircraft reached taxiway A1. Various safety actions in respect of lighting and signage had been taken as a result of these previous events, including the designation of the location as a hot spot and promulgation of this in the AIP since 9 April 2009. It was noted that at the time of the incident, Finnair still had not added this information on the Runway 07L entry area hot spot to the latest Crew Briefing for Hong Kong dated 16 November 2010. Despite this, the pilots indicated that they were aware of the existence of the hot spot, although it had only been quickly mentioned during their crew briefing and no attention had been given to the written explanation of the hot spot on the proprietary taxi chart used which had been updated in line with the current AIP.

The formal statement of Findings of the Investigation included the following:

The following Causal Factors were identified by the Investigation:

Six Safety Recommendations were made as a result of the Investigation:

The Final Report of the Investigation Serious Incident Report 1/2011 was published in December 2011.