On 26 December 2016, the wing of an Airbus A340-300 being repositioned by towing at Copenhagen as cleared hit an Avro RJ100 which had stopped short of its stand when taxiing due to the absence of the expected ground crew. The RJ100 had been there for twelve minutes at the time of the collision. The Investigation attributed the collision to differing expectations of the tug driver, the Apron controller and the RJ100 flight crew within an overall context of complacency on the part of the tug driver whilst carrying out what would have been regarded as a routine, non-stressful task.

On 26 December 2016, an Airbus A340-300 (OY-KBC) being repositioned out of service by towing at Copenhagen in normal day (but twilight) visibility was in collision with an Avro RJ100 ( SE-DST) which had just arrived from Gothenburg on a non-revenue positioning flight and which had stopped short of its assigned parking stand to await stand entry guidance. Both aircraft were damaged, the Avro sustaining substantial damage to its empennage and the A340 minor damage to its right wingtip.

An Investigation was carried out by the Aviation Unit of the Danish Accident Investigation Board. Data from the Avro SSCVR were recovered but found to be of no use as the controlling circuit breaker had not been tripped after the collision and the recording only commenced 23 minutes after it had occurred. However, ATC communications and A-SMGCS data and Security Camera recordings were available. It was determined that the prevailing weather conditions “had no influence on the sequence of events” and noted that appropriate aerodrome charts had been available to both the Avro flight crew and the A340 tug driver. However, it was also noted that natural light levels were low and 'night' conditions were imminent at the time of the collision.

It was found that the 41 year-old Avro RJ Captain (9,613 total flying hours including 5,663 hours on type) had made regular but infrequent visits to Copenhagen over the previous 12 years but had no previous experience of using stand E77 or either of the similarly-configured adjacent stands E76 or E78. The tug driver involved had 15 years of operator aircraft towing experience at Copenhagen and the Investigation considered that “the towing of (the A340) was a routine and non-stressful task”.

It was established that the Avro had arrived at its designated parking stand E77 after following the correct taxi instructions six minutes after landing but the crew had then found that the expected ground handling personnel were not in attendance. They reviewed the apparent wing tip clearances in respect of both their arrival and the subsequent self-manoeuvring which would be required to depart from the stand and decided that they were not sure these were sufficient. They had therefore decided to stop their aircraft on the stand lead-in line approximately 14 metres short of the stand painted stop mark and call their handling agent to attend. This meant that the aircraft was not within the designated stand area and that the tail was sticking out into to the taxiway. Whilst waiting for the arrival of the handling agent, the crew kept all engines running, the anti-collision lights on and maintained a listening watch on the promulgated APRON frequency on which they had received their taxi-in clearance. There was no response to their (several) calls on the handling agent frequency.

Meanwhile, a clearance had been requested and given by the APRON controller using a discrete radio communication channel for the Airbus 340 to reposition along a route which passed stand E77. At that point, “it was the perception of the controller that (the Avro) had fully parked at aircraft stand E77”. The repositioning was being undertaken using a towbarless tug whose driver was in contact with ATC and in charge of the movement with another person on the flight deck of the aircraft to operate the APU and the aircraft external lights. It was noted that there was no radio means of communication between the tug driver and the person on the flight deck.

As the tug driver towing the A340 was about to pass stand E77, neither he nor the person on the aircraft flight deck had noticed the presence of the Avro protruding from stand E77. 18 minutes after the Avro had landed and 12 minutes after it had stopped partly in the E77 stand position, the A340 right winglet hit the Avro tail. The impact caused “substantial damage to the Avro but only relatively minor damage to the A340". 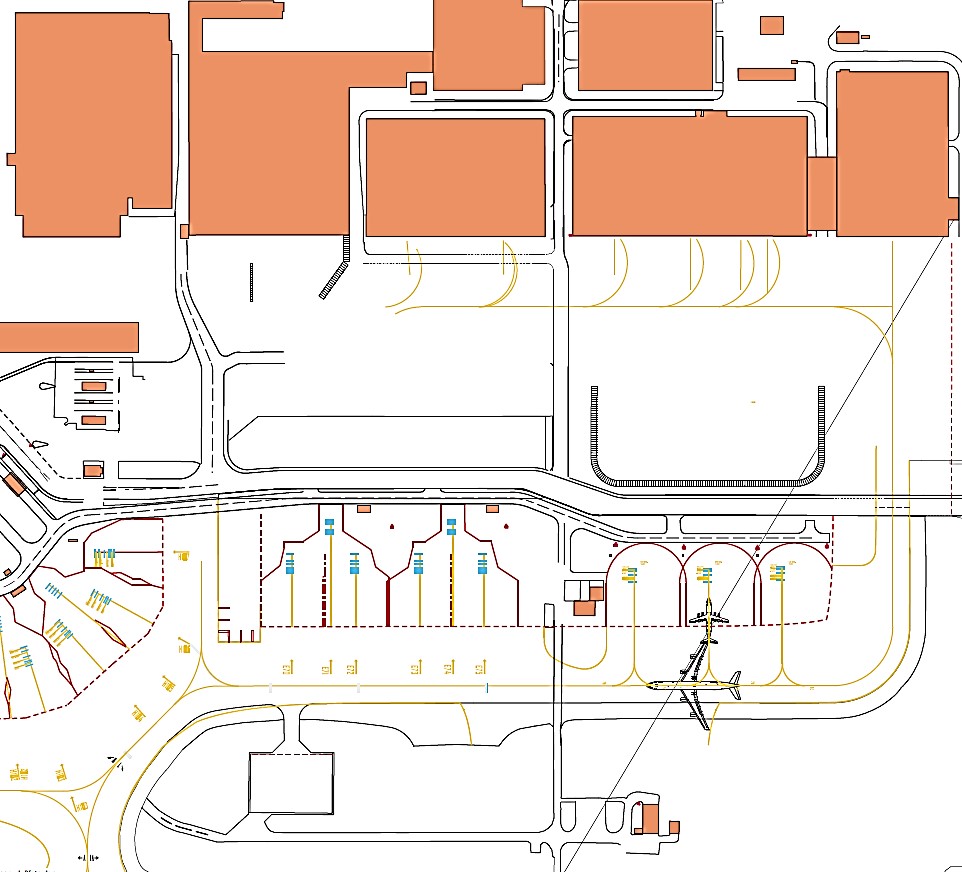 The relative positions of the two aircraft at the point of collision. [Reproduced from the Official Report]

The Investigation considered that a number of “latent risk factors” may have contributed to this including poor natural light, an assumption that the Avro was actually within the marked area of stand E77 and an assumption that the Avro was a departing awaiting permission to push back onto the taxiway he was using after his tow had passed. An overall context of complacency whilst carrying out a “non-stressful and routine task” was considered to have been likely.

The unfamiliarity of the Avro flight crew with both stand E77 and the fact that a positioning flight would not automatically be met on arrival by their handling agent had collectively resulted in the aircraft being partly outside the marked area of the stand for an extended period which meant that by the time the collision occurred, its A-SMGCS target had reverted from a (white) data-tagged secondary one to a (blue) primary one showing just the aircraft registration even though the aircraft transponder had remained on in accordance with SOP. It was found that this post landing reversion to a primary target - a built-in feature of the installed A-SMGCS at Copenhagen - had occurred in between the request made by the tug driver for A340 repositioning clearance and the issue of the requested clearance by the controller.

The Conclusions of the Investigation as to the Cause of the Accident were that “independent expectations had led to three diverging mental realities affecting the sequence of events”. These were identified as:

The Final Report was published on 23 March 2017. No Safety Recommendations were issued.