On 18 April 2013, an Airbus A340-300 was unintentionally taxied off the side of the runway during a 180° turn after backtracking the departure runway at Tabriz at night. The Investigation found that the prevailing wet runway conditions meant that the runway width alone was insufficient for the turn and full advantage had not been taken of a wide taxiway at the runway displaced threshold. It was also found that the technique used to turn had not been optimum and that the runway involved was for daylight use only and had a strength rating not compatible with A340 use.

On 18 April 2013, an Airbus A340-300 (9M-XAC) being operated by Air Asia on an international passenger flight from Tabriz to Medina for Saudi Arabian Airlines as SVA 2869 failed to complete an attempted 180° turn to align with the cleared take off direction in normal night visibility after backtracking the full length of the runway and the nose gear departed the side of the paved surface into soft ground and became stuck. The 295 passengers were disembarked and the aircraft subsequently recovered using ground equipment. On subsequent inspection by the Air Asia engineer accompanying the aircraft, it was found to be undamaged. 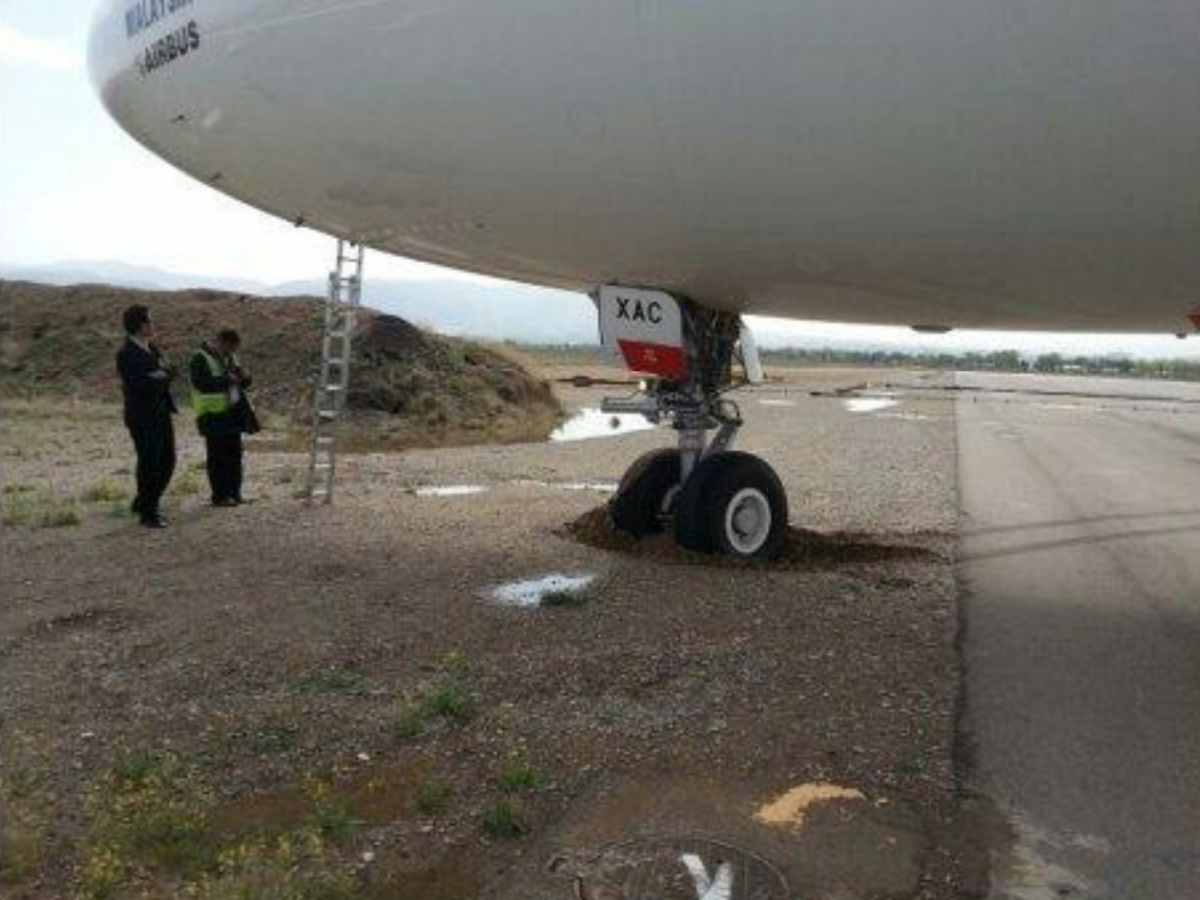 The nose gear stuck into soft ground outside the paved surface. [Reproduced from the Official Report]

An Investigation was carried out by the Aircraft Accident Investigation Department of the Iran Civil Aviation Organisation (CAO). CVR and QAR flight data, the latter with equivalent parameter recording to the FDR, were successfully downloaded and used to assist the Investigation. It was specifically noted that the downloaded data was consistent with the accounts given by the pilots.

It was established that after leaving the apron, the aircraft had been cleared to taxi onto departure runway 30L via taxiway 'A' and then backtrack to the beginning of the 45 metre-wide runway in order to perform a full length (3,757 metre) take-off (see the illustration below). As the aircraft approached the end of the runway, the Captain began a clockwise 180° turn but when he detected skidding, judged that there was now insufficient room to safely complete the commenced turn and decided to change to an anti-clockwise turn. However, the turn in this new direction continued, the crew reported having become concerned that it may not be possible to complete it whilst maintaining sufficient clearance for the No 4 engine to pass safety over the jet blast barrier located just to the south east of taxiway 'C' on the north side of the runway and requested and obtained the assistance of a marshaller. Although the marshalling guidance was given to continue the turn, the crew were concerned at both the likely engine clearance over the jet blast barrier and the position of the nose landing gear in relation to the edge of the paved surface and the aircraft was stopped because of this concern rather than a marshaller signal. Once the aircraft had stopped, the Captain had asked the Company Engineer travelling with the aircraft to exit it via the avionics compartment access door to check the situation and once outside the aircraft he was able to see that the nose landing gear was already off the runway.

It was found that although the surface wind had been very light at the time of the excursion, it had been raining at the time and the asphalt surface of the runway had been wet. It was noted that the FCOM stated that the actual turn on a dry good condition runway for the aircraft involved "without margin" was exactly the same as the actual runway width. However, the prevailing wet runway surface would have meant that additional width for the turn would have been required despite the Captain's use of the full steering capability - a 72° angle - and his maintaining an appropriate ground speed whilst turning. 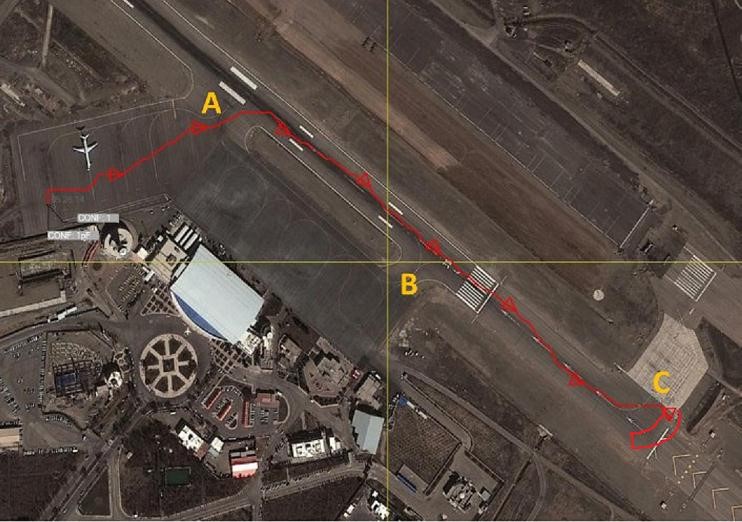 The aircraft track to the runway 30L threshold after entering via taxiway 'A' showing that little use was made of taxiway 'C' during the attempted turn near the threshold. [Reproduced from the Official Report]

QAR data confirmed that skidding had occurred during both the initially attempted (and SOP-recommended) clockwise turn and the subsequent anti-clockwise turn. In both cases, the Captain had used differential braking with ground speed 5 knots below the recommended minimum whilst significantly increasing engine thrust with the aim of tightening the turn "due to the low turning speed". Runway marks showed that in one of these episodes, the action had actually increased the turn radius by 0.3 metres. It was noted that the SOP for the turn detailed in the FCTM explicitly recommended not using differential braking and highlighted the importance of maintaining a minimum ground speed not less than 8 knots "so as to avoid the need to significantly increase thrust in order to continue moving". It was also noted that during the Captain's attempt at an anticlockwise turn, the aircraft had passed beyond the displaced runway threshold which had led directly to its closeness to the jet blast barrier and, having "not made much use of" the additional space provided by the presence of the very wide taxiway 'C' during the initial turn attempt, had resulted in this space being no longer available.

The Investigation also found that:

The Conclusion of the Investigation was that the wet surface of a runway which was "unsuitable" for use by an A340 had resulted in the aircraft skidding during the attempted 180° turn despite the use of full nose wheel steering capability and use of a very low groundspeed.

A Contributory Factor was identified as the need to backtrack to the full length of the departure runway because the pilots did not have the necessary take-off performance data for a departure from taxiway 'B'.

Ten Safety Recommendations were made as follows:

The Final Report of the Investigation was "released" on 8 April 2013 and subsequently (2017) made available online.