On 2 August 2005, an Airbus A340-300 attempted a daylight landing at Toronto on a rain-soaked runway during an active thunderstorm and overran for 300 metres ending up in a ravine from where, despite its destruction by an intense post crash fire, all 309 occupants escaped. The Investigation recommendations focused mainly on improving crew decision making in adverse weather conditions and issues related to the consequences of such an overrun on survivability, the latter including one for a 300 metre RESA requirement to be implemented.

On 2 August 2005, an Airbus A340-300 being operated by Air France on a scheduled passenger flight from Paris CDG to Toronto landed at destination in daylight during a thunderstorm and failed to stop before reaching the end of the runway. It exited the airport perimeter and crossed a main road before ending up in a ravine approximately 300 m beyond the end of the runway. Although an intense post-crash fire began immediately and smoke began to enter the cabin, all 309 occupants were able to evacuate before the fire took significant hold. The fire eventually consumed most of the upper fuselage, the adjacent wing sections and the vertical stabilizer. 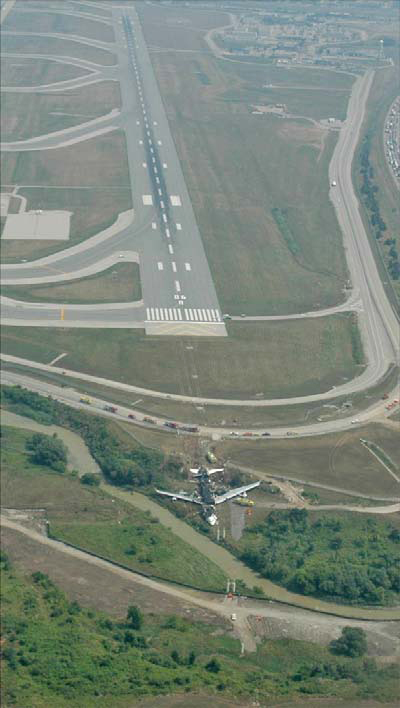 A340-300 accident at CYYZ, 2005. The picture of the accident site in relation to the runway is taken from the official TSB report of the investigation which followed.

An Investigation into the Accident was carried out by the Canadian Transportation Safety Board (TSB). It was established that all aircraft systems had been serviceable and working as designed throughout the approach and landing and that, therefore, no mechanical malfunction contributed to the accident outcome.

It was established that the First Officer had been designated Pilot Flying (PF) for the approach and landing. It was noted that forecast weather for the arrival had included the possibility of thunderstorm activity at both destination and alternates and that the flight crew had been aware of weather-related delays for their arrival and that other aircraft were having to divert because of them. It was found that the approach briefing had not included any reference to either runway length or the missed approach procedure and no runway distance calculations for a wet or contaminated runway were included.

When the aircraft was on short finals, it was evident that an active thunderstorm was in the vicinity of the airport and the previous landing aircraft reported that braking action was poor. FDR data showed that after the PF had disconnected the autopilot at 323 feet (above ground level), the aircraft had begun to deviate above the ILS GS. It crossed the runway threshold still high and, as the flare was commenced, it entered heavy rain which reduced visual reference - recorded visibility just after the accident was 2000 m. Numerous lightning strikes were occurring, particularly at the far end of the runway. The aircraft did not touch down until it was 3800 ft from the beginning of the 9000 ft runway and did so with the right main landing gear slightly left of the runway centerline and the aircraft axis about six degrees to the right of it. Autobrake had been set to Medium, but the crew immediately applied maximum manual braking and attempted to align the aircraft with the centreline. FDR data showed that Idle reverse was selected 12.8 seconds after main gear touchdown and full reverse 3.6 seconds later. There were no standard callouts for spoiler and reverser deployment from the aircraft commander. The aircraft was not able to stop on the remaining runway and overran the end at a groundspeed of approximately 80 kts It was concluded that there was no information to indicate that the aircraft had encountered windshear during its approach and landing. 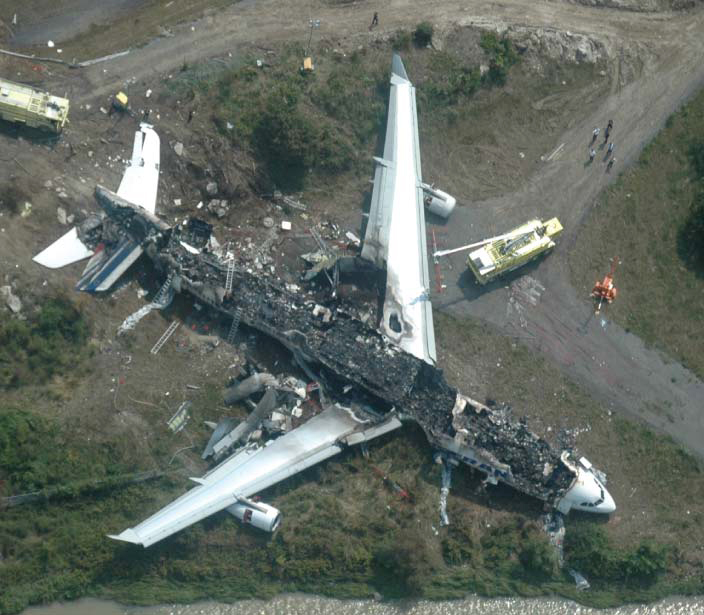 The Investigation considered that:

"The point at which the situation changed from normal and manageable to abnormal and critical was near the runway threshold when the aircraft entered the perimeter of the cell activity. At this time, a number of circumstances combined, leading directly to the accident. The PF was monitoring the airspeed trend vector and responded to an indication of decreasing airspeed by adding power; however, he kept it there too long. Had the autothrust been engaged, the engine power would have been adjusted to maintain the proper airspeed, and it would have been more likely that the aircraft would have been landed closer to the target touchdown point. At that very time, both pilots became preoccupied with the reduced forward visibility, and airspeed scanning rate decreased. Without the airspeed control provided through the autothrust, the increase in energy from the extra thrust increased the airspeed and groundspeed. As they crossed the runway threshold, with the heavy rain, low visibility, lightning, and shifting winds, the flight crew members became overwhelmed by the severe weather conditions and became task saturated, making a normal landing difficult… While they were in the flare and the initial float, the pilots did not appreciate how much of the runway was being used up… The delay in the selection of the thrust reversers and the subsequent delay in the application of full reverse thrust added to the landing distance needed.”

It was noted that whilst the surface water on the runway reduced the braking action available, calculations during the Investigation had shown that the aircraft could not have stopped in the runway distance remaining after the late touchdown even if the runway had been wet instead of contaminated. Given that the flight crew had “observed the runway to be shiny, like the surface of a lake” which suggested that there would probably be more than 3 mm of water on the runway it was considered that they “either did not take this into account… when they continued with the approach and landing, although they knew that the crosswind exceeded (the allowable limit for contaminated runways).

It was also noted that "Air France Airbus A340 crews have the option of conducting a go-around during an approach when it becomes evident that it is unsafe to land. In theory, the decision to go around can be made as late as when the aircraft is on the ground, as long as reversers are not yet selected.” However it was considered that “when the aircraft was near the threshold… the crew members became committed to landing and believed that their option to go around no longer existed”.

The non use of available rain repellent was considered by the Investigation. The flight crew had been unaware of this capability and ”a survey among other pilots flying aircraft that have this system revealed that many of them either do not use or do not know under what conditions it would be advantageous to use it.”

The fact that under Air France SOPs the decision on whether to initiate a go-around, missed approach or a balked landing could at the time be made only by the Captain, regardless of who is flying the aircraft, was noted and it was considered by the Investigation that “having more than one pilot responsible for making the call about a missed approach can increase the likelihood that an unsafe condition will be recognized early and decrease the time it might otherwise take to initiate the missed approach”.

In respect of the evacuation, it was noted that:

The investigation considered the question of the limited Runway End Safety Area which had existed at the end of the accident runway and the opportunities which were available and which could have reduced the potential consequences of an overrun such as the one which occurred. It was noted that had the Runway 24L RESA met neither the ICAO Recommended Practice, US FAA standard or the FAA alternate means of compliance Engineered Materials Arresting System, both aircraft damage and occupant injuries may have been reduced. The effect of these alternatives in respect of the overrun are illustrated on the diagram below taken from the official report: 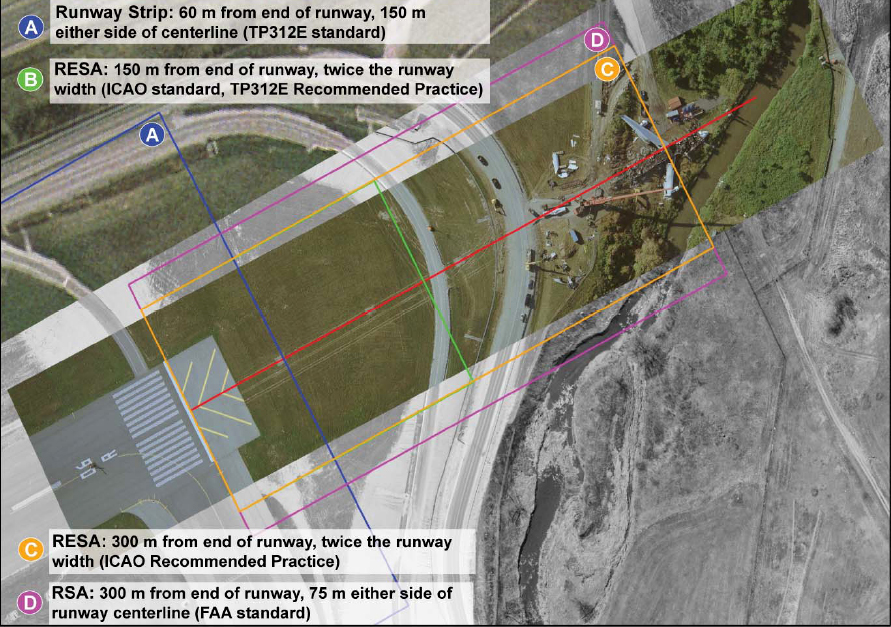 The Findings of the Investigation included the following:

A number of Safety Actions were taken by Air France, Transport Canada and Airbus in response to the findings of the Investigation.

A total of 7 Safety Recommendations were made as a result of the Investigation as follows: