On 13 March 2012, an A340-300 crew cleared for a Cat 3 ILS approach at Paris CDG with LVP in force failed to descend at a rate which would allow the aircraft to capture the ILS GS and at 2nm from the runway, when still 2500 feet above runway height, the ILS GS mode engaged on a false upper lobe of about 10° and as a result of the consequent rapid pitch up and speed reduction, aircraft control was almost lost. After a period of further confusion, a go around was initiated and the subsequent approach was uneventful.

On 13 March 2012, an Airbus A340-300 on a scheduled passenger flight from Bamako, Mali to Paris CDG, with LVP in force due to fog, continued a night Category 3 ILS approach to runway 08R in Instrument Meteorological Conditions (IMC) beyond the point where there was any possibility of a landing before initiating a go around after which a second approach to the same runway was completed uneventfully.

An Investigation was carried out by the French Bureau d'Enquêtes et d'Analyses (BEA) based upon flight data from the DAR and interviews with the crew and the controllers involved. By the time the event was notified to the BEA, the Cockpit Voice Recorder (CVR) recording of the event had been overwritten.

It was confirmed that the aircraft commander had been PF throughout and that, with the aircraft stable at FL090 and about 30nm from the threshold of the allocated landing runway 08R, APP had cleared the aircraft to intercept the ILS LOC. Soon afterwards as the aircraft reached the 3° GS, a clearance to FL080 and then FL060 was given. As a slow descent began in OP DES (Open Descent) mode rather than the SOP VS mode, the ILS LOC was captured, speed remained at 250 knots and deviation above the height of the ILS GS continued to increase. As it passed 7220 ft QNH, the aircraft was still at 250 knots and 17.5nm from the threshold (equivalent to about 1125 ft above the ILS GS) when ATC requested that speed should be maintained at “more than 200 knots” and gave further descent to 3000 ft. The crew selected 220 knots and 3000 ft whilst remaining in OP DES mode so that the rate of descent decreased since in that mode, acquisition of the selected speed takes priority. The rate of descent was increased to 1840 fpm after airbrake deployment but at 10nm from the threshold, the aircraft was at 5500 ft Altimeter Pressure Settings when instructed to maintain a speed of not less than 160 knots and change to TWR. Selection of a lower speed in OP DES mode again had the effect of reducing the rate of descent and increasing the deviation above the GS.

Following clearance to land, the second AP was engaged, slats/flap config 2 selected and at 4nm with the aircraft 2100 feet above the ILS GS height for that range, and with the PFD indicating that the GS was being approached from above, the ILS GS was armed by selecting APPR mode. At that point, the Investigation calculated that the aircraft was within a false lobe radiating at about 10°. About 30 seconds later, when the aircraft was 2nm from the threshold and 2500 feet above it and just after the landing gear had been selected down, the aircraft AP suddenly pitched the aircraft up (towards the captured false GS). Over 12 seconds, pitch increased from 1° to 26°, the vertical speed changed from 1600fpm down to 3300fpm up and airspeed dropped from 160 knots to 130knots. At that point, with the thrust levers at idle, the crew disconnected both autopilots, the PF pushed the control column forward “almost down to the stop” and the airbrakes were stowed. With airspeed increased to 147 knots, AP1 was re-engaged with LOC and GS modes active and CL thrust was selected with the reported intention of commencing a go around. With the aircraft at a height of about 2360 feet directly above the runway threshold, pitch decreased from 2° to -5° and the aircraft began to descend. At this point, by now at about 1600 feet above the runway, “the PF stated that he realised that the modes displayed on the FMA were not appropriate”. He had then disconnected AP1 some 8 seconds after having engaged it, pitched up to about 6° and placed the thrust levers in the TOGA setting. Whilst this pitch attitude was significantly less than the 12.5° specified for a go around, the climb out and a subsequent further approach and landing were found to have proceeded without further difficulties. 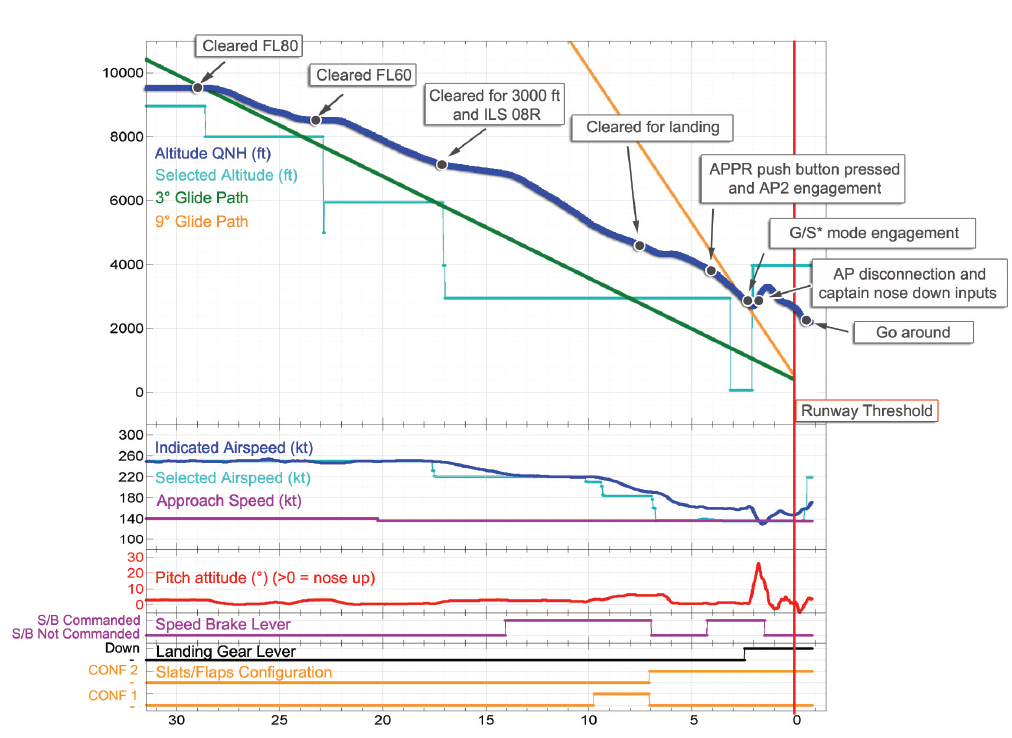 The DAR record of the approach reproduced from the Official Report

The crew testimony was summarised as follows:

“The crew knew that they were above the ILS glide path. They explained that they tried to correct the path when the controller cleared them to intercept the ILS. The controller’s clearance strengthened their conviction that they were in a situation enabling them to meet this request. The crew stated that they were tired on approach and not really aware of their distance in relation to the runway threshold. They had planned to continue the approach as far as the stabilisation altitude (1,000 ft).”

It was noted Air France pilot training included use of an SOPs for intercepting the ILS GS from above in an A340 with the AP engaged but it was observed that it had not been followed in this event and in any case did not include any operational limits for its use. It was noted that the FAP for a vertical clearance to 3000 feet QNH as given in this case was at 8.2nm.

It was also noted the slight delay in giving descent clearance from FL090 had been the consequence of traffic simultaneously positioning for an approach onto parallel runway 09L.

It was noted that the APP controller’s confidence that the approach for which clearance had been given was achievable had been strengthened by the absence of any mention of difficulties by the pilots. It was also noted that the visual reference points on the controllers radar screen were only applicable for the ‘standard’ descent on the GS from 5000 feet with no equivalent guidance in the case of clearance being to the GS at lower altitudes as in this event.

The formal Conclusion of the Investigation was that the serious incident was due to:

And that the following factors contributed to it:

It was additionally considered that given the time of the event - 0550 local time - flight crew and controller fatigue may have been a factor.

The Final Report of the Investigation was published September 2013 after its earlier publication in French in March 2013.