On 21 August 2019, an Airbus A340-600 encountered sudden-onset moderate to severe clear air turbulence whilst in the cruise at FL 360 over northern Turkey which resulted in a serious passenger injury. The Investigation found that the flight was above and in the vicinity of convective clouds exhibiting considerable vertical development but noted that neither the en-route forecast nor current alerting had given any indication that significant turbulence was likely to be encountered. It was noted the operator s flight crew had not been permitted to upload weather data in flight but since this event, that restriction had been removed.

On 21 August 2019, an Airbus A340-600 (G-VFIT) being operated by Virgin Atlantic Airways on a scheduled international passenger flight from New Delhi to London Heathrow with an augmented crew was in the cruise in day IMC when it unexpectedly encountered transient moderate to severe turbulence whilst the seat belt signs were off. As a result one passenger sustained a serious injury and one member of the cabin crew a minor injury. The flight thereafter was completed without further event with a medical emergency declared for arrival and a priority approach granted.

An investigation was carried out by the UK AAIB. Relevant recorded data was available from the FDR but that on the CVR had been overwritten. It was noted that the relief First Officer was acting as PF at the time of the event and the 54 year-old Captain, who had a total of 18,062 hours flying experience including 5,722 hours on type, had just returned from his rest period, as PM.

The flight was in clear and smooth air at FL360 at M 0.82 with the seat belt signs off as it approached an area over the central Black Sea which was shown on the forecast significant weather chart which the crew had obtained prior to flight as likely to be affected by isolated embedded cumulonimbus clouds with tops at FL320 (see the first illustration below). The Captain reported that as the flight approached the waypoint ‘OLUPO’ just prior to reaching this area of forecast convective cloud, (see the ground track followed on the illustration below), he had seen “a single ‘non-threatening’ cloud on their track which was not showing on the aircraft weather radar”. At this time he stated that although there were cumulonimbus clouds on the horizon, there were no other clouds in their immediate vicinity. 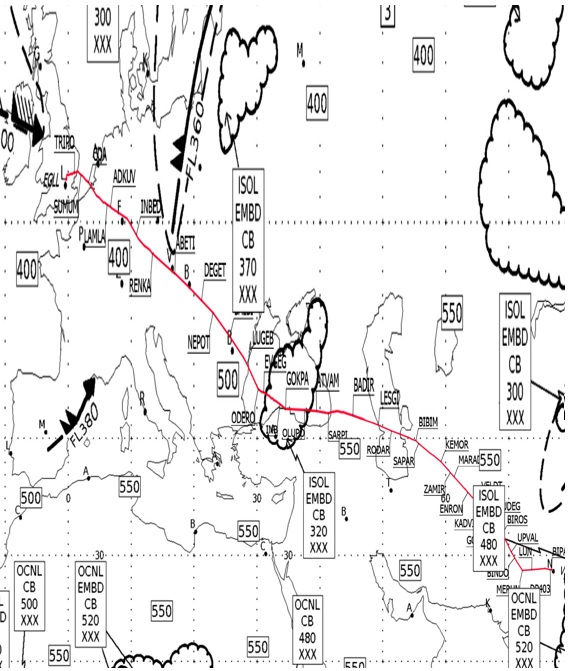 Part of the forecast significant weather chart with the flight planned route superimposed. [Reproduced from the Official Report]

The aircraft was then cleared from ‘OLUPO’ direct to waypoint ‘ODERO’, located at the border between Turkish and Bulgarian airspace, and following this track took the aircraft clear of the single cloud. However, as the flight passed north abeam of this cloud, a sudden onset of “moderate to severe turbulence” occurred. The First Officer reported having seen the speed trend arrow “indicating +40 knots and the speed increasing rapidly” and in response had immediately selected a lower Mach number and extended the speed brakes to prevent an overspeed. The Captain “recalled seeing the wind shifting from a 40 knot tailwind to a 20 knot headwind in 2-3 seconds”.

The worst of the turbulence lasted for around five seconds and was followed by light turbulence which continued for six minutes until clearance to climb to FL380 was given. QAR data showed that the reported turbulence had caused “vertical acceleration varying between +0.64 g and +1.56 g” as the airspeed had increased to M 0.86 and the aircraft rolled +/- 5°. It also confirmed that the seat belt signs had been switched on 1 minute and 49 seconds after the onset of turbulence.

The serious injury occurred to a passenger who was waiting to use the toilet in the rear galley who recalled that he had “suddenly found himself lying on the floor not knowing what had happened”. He stated that his right ankle was extremely painful and had swelled up within a few seconds. He was initially assisted back to his seat before being moved to a different seat with more space and was provided with an ice pack and painkillers. Nevertheless, his ankle continued to be extremely painful and after a priority approach at London Heathrow, he was hospitalised where “it was found that his ankle was dislocated and broken in two places”. After recovery from surgery, he was discharged from hospital a week later. The member of cabin crew who sustained the minor injury reported having injured his shoulder when falling against a bulkhead during the turbulence.

The question of when it is generally appropriate for the seat belt signs to be on was briefly discussed and it was recognised that “flight crew must balance the need to ensure the signs are on prior to any significant turbulence with the need to ensure they are not on unnecessarily” since it could be frustrating for passengers if the signs were routinely on for extended periods in what then turned out to be smooth conditions.

The determining feature of the atmospheric situation in which the un-forecast Clear Air Turbulence (CAT) had occurred was a low pressure centre over northwest Turkey around which winds of up 65 knots were circulating (see the illustration below) in the southeast quadrant which the flight was transiting. The operational flight plan provided to the crew corresponded to this with the forecast wind velocity for OLUPO given as 202° at 63 knots and showed a gradual change to easterly over the next 300 nm. It also gave an upward vertical shear rate expected to increase from 1 knot per 200 feet at OLUPO to 4 knots per 200 feet over the next 300 nm as the flight passed to the north of the low pressure centre. The Captain stated that in his experience, he had found that “shear values in single digits do not normally indicate significant turbulence”. SIGMETs which were valid at the time of the event had been issued for the presence of thunderstorms in the area but these had made no explicit reference to turbulence. 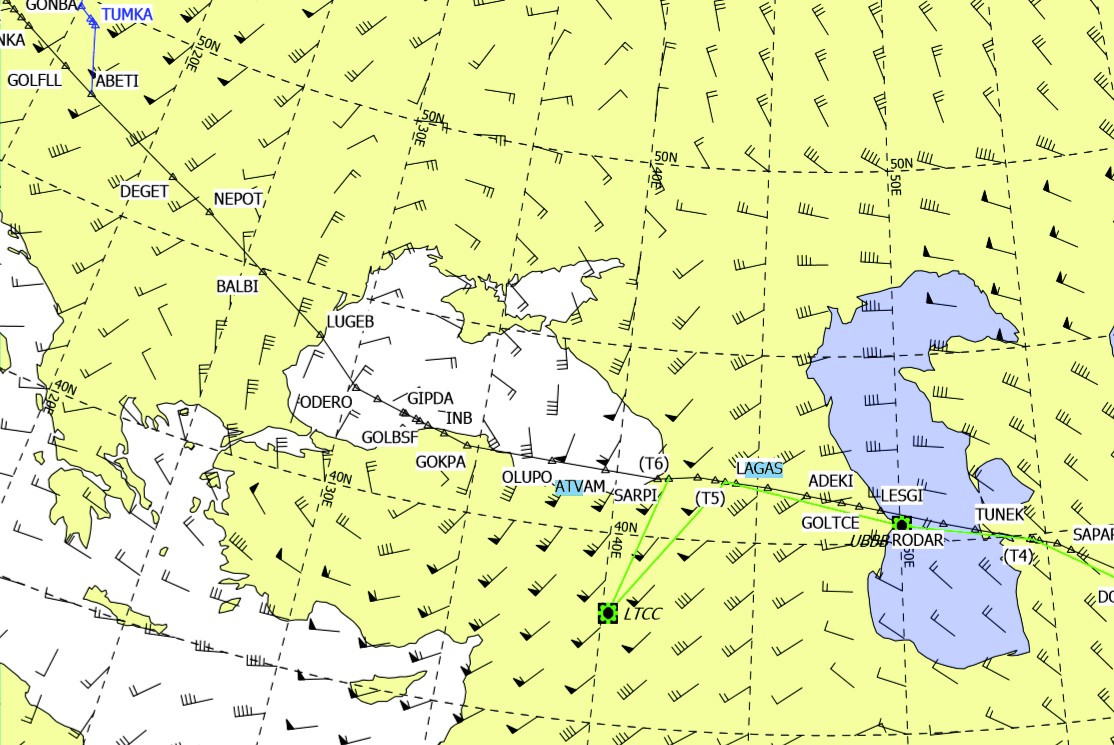 Part of the wind chart valid at the time of the turbulence. [A partial reproduction of the one in the Official Report]

A satellite-derived image showing cloud top heights at the time of the turbulence (see the illustration below) showed that “there was a large area of cloud with tops between 30,000 ft and 35,000 ft across the area in question”.

A satellite-derived image showing cloud top heights at the time of the turbulence encounter. [A partial reproduction from the UK Met Office image in the Official Report]

The Captain reported that subsequent to the encounter, the crew had “used a charting application on their tablet devices which showed en route weather layers, forecast winds and areas of turbulence” and found that it “did not show any turbulence in the area”. However, it was found that at that time, the aircraft operator only approved uploading of data to the tablet when the aircraft was on the ground, so the finding was unsurprising.

The Conclusion of the Investigation was that the turbulence encountered was caused by a rapid wind shift prior to which no information was available to the flight crew, either in the pre-flight paperwork, from the weather radar or visually to forewarn the flight crew that they were approaching an area of turbulence and so the seatbelt signs were off when it occurred.

Safety Action: since the event, Virgin Atlantic Airways has approved flight crew use of the onboard WiFi system to update the meteorological application in flight so that they have access to the most up-to-date weather information.

The Final Report of the Investigation was published on 13 February 2020. No Safety Recommendations were made.