On 18 October 2014, an Airbus A380 descending at night over north east India unexpectedly encountered what was subsequently concluded as likely to have been Clear Air Turbulence after diverting around convective weather. Although seat belt signs were already on, a flight deck instruction to cabin crew to be seated because of the onset of intermittent light to moderate turbulence was completed only seconds before the sudden occurrence of a short period of severe turbulence. Two unrestrained passengers and two of the cabin crew sustained serious injuries. There were other minor injuries and also some cabin trim impact damage.

On 18 October 2014, an Airbus A388-841 (9V-SKJ) being operated by Singapore Airlines on a scheduled passenger flight from Singapore Changi to Mumbai was in night VMC when a sudden and brief period of severe turbulence occurred during descent at FL 150. Two passengers and two members of the cabin crew sustained serious injuries and a number of other passengers sustained minor injuries. Medical assistance on arrival was requested through the airline's handling agent but ATC were not advised. Damage was caused to parts of the cabin trim.

It was established that the Senior First Officer had been acting as PF and that it had been expected that descent into Mumbai might need to involve deviation around adverse convective weather. During descent on track from FL380 to FL150, the weather radar was seen to show isolated convective activity on the intended track and having reached FL150 about 86nm from destination, ATC were advised that a deviation would be needed to avoid this with the objective of remaining at least 10nm clear of the green edge of the area showing weather returns. This was approved at the commencement of the deviation and the seat belt signs were switched on as a precautionary measure. During the deviation, ATC twice asked the aircraft to resume a direct track to the next waypoint but this was declined because it would have compromised the weather avoidance objective. Eventually, clear of the weather returns, ATC approved a direct track to the next waypoint at FL 150. Shortly afterwards, some light to moderate turbulence occurred. Then, about 4½ minutes after the seat belt signs had been turned on, and "sensing that the ride was getting bumpier" the PF made an announcement over the PA requesting the cabin crew to be seated. FDR data showed that 5 seconds after this PA had finished, a single sudden brief period of severe turbulence occurred. A number of passengers and members of the cabin crew "were thrown up towards the cabin ceiling" - the cabin crew had not had sufficient time to ensure all the passengers were seated and secured or to get themselves seated. FDR data showed that the turbulence had lasted just over 2 minutes and that vertical acceleration had fluctuated between +1.77g and - 0.42g during that time. Some cabin trim was superficially damaged by bodily impact but there was no other damage to the aircraft and flight path control was maintained.

Once the turbulence had ceased, the Flight Deck was informed of the occurrence of injuries and that some appeared to be relatively serious. The flight crew took the decision to arrange medical assistance on arrival through the airline's handling agent. They also decided not to inform ATC of the situation because it was "considered unnecessary" given that the aircraft was "almost on the final approach into Mumbai Airport and that ATC was already giving them a direct route to join final approach". This latter decision was noted as contrary to the airline requirement to "inform ATC of any significant event or serious incident". There was no further turbulence and the remainder of the flight was without further event. 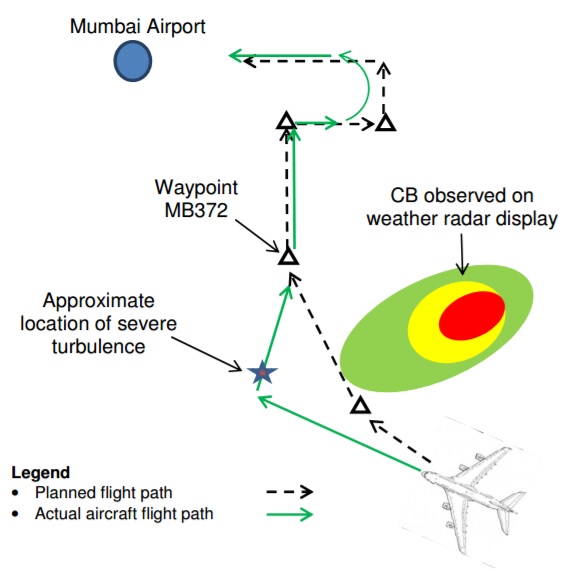 It was noted that both Airbus and Aircraft Operator procedures recommended that "all yellow, red and magenta cells should be avoided by at least 20 nm" and that in addition, the Operator had further recommended avoidance of all adverse weather "by at least 10nm when flying below FL 230". The flight crew stated to the Investigation that "they had assessed from the weather radar display that the edge of the green cell was at least 10 nm from the edge of the yellow cell" so that by staying clear of the green edge of the weather by at least 10 nm, at least 20nm of separation from the nearest yellow edge had been achieved.

The Investigation did not note the overall or aircraft type flying experience of the two pilots involved or the Captain's time in command and on type. Also, the meteorological situation at the time was not examined in detail but neither the nature of the FDR data nor the disposition of other traffic supported the possibility of a wake vortex origin for the turbulence.

The Probable Cause of the event was determined as "most probably a case of encounter with clear air turbulence, given that there were no clouds in sight and no sign of adverse weather on the weather radar display when the severe turbulence was encountered".

The remainder of the Investigation considered two safety issues related to the event:

Safety Action was taken by the Operator to remind its flight crew of the importance of informing ATC of any emergency situations or injuries encountered in flight.

The Final Report of the Investigation was published on 27 May 2016. No Safety Recommendations were made.