On 10 September 2017, an Airbus A380-800 cleared for an ILS approach at Moscow Domodedovo in visual daylight conditions descended below its cleared altitude and reached 395 feet agl whilst still 7nm from the landing runway threshold with a resultant EGPWS ‘PULL UP’ warning. Recovery was followed by an inadequately prepared second approach which was discontinued and then a third approach to a landing. The Investigation attributed the crew’s difficulties primarily to failure to follow various routine operating procedures relating to use of automation but noted that there had been scope for better presentation of some of these procedures.

On 10 September 2017, an Airbus A380-800 (A6-EEZ) being operated by Emirates on a scheduled international passenger flight from Dubai to Moscow Domodedovo as EK 131 failed to establish on the ILS LLZ for runway 14R in day VMC before continuing descent below its cleared altitude. When the controller noticed this, they instructed it to stop descent but when the initiation of a go around was delayed, an EGPWS ‘PULL UP’ Warning followed during which a minimum of 395 feet agl was reached. On being informed of the intention to discontinue the approach, the controller instructed the aircraft to maintain its present (200°) heading and commence a climb. A second approach was discontinued from a safe altitude and a third was subsequently completed successfully. 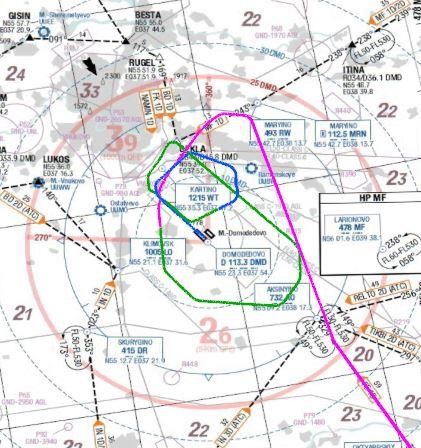 The aircraft ground track during the three approaches in sequence (magenta, green and blue) superimposed on the Runway 14R STAR Transitions Chart. [Reproduced from the Official Report]

The flight crew involved “did not consider the event to be a ‘serious incident’, despite the available evidence” and only notified the Operator of it by submitting an ASR after the aircraft had taken off for the return flight to Dubai which “did not mention the seriousness of the event”. Once this became apparent, the Russian authorities were contacted and agreed to delegate the Investigation to the UAE AAIS as the State of Registry and of the Operator and the GCAA Air Accident Investigation Sector (AAIS) commenced an Investigation. Relevant DFDR data were downloaded but that from the CVR had been overwritten during the return fight to Dubai and was therefore unavailable. However, FMS BITE data and recorded ATC data were also available.

It was found that the 54 year-old Captain, who was acting as PM for the flight, had a total of approximately 18,000 flying hours of which 7,940 hours had been whilst an Emirates employee, initially as a co-pilot. He had a total of 4,855 hours in command on all types and had obtained his A380 type rating in December 2014 after experience on the operator’s A330/A340 fleet and had 2,615 hours on type. The 39 year-old PF First Officer had a total of 7,280 flying hours of which 700 hours were on type. Prior to joining Emirates to fly the A380, he had been employed elsewhere as a Boeing 737NG First Officer. It was noted that both pilots were recorded as having received all required training which in particular included that provided on glideslope interception from above in accordance with the OM Part ‘D’.

Whilst approaching Domodedovo from the southeast on track towards the ‘AO’ NDB (see the illustration above) in CAVOK (cloud and visibility OK) conditions, ATC began providing radar vectors towards the Runway 14R ILS (see the illustration below) leading direct to the ILS final approach point (FAP) (point ‘P’ on the ILS14R approach chart below) on a track approximately parallel to a line linking the initial approach fix (IAF) at 'AM TAM' and the ILS IF but 2.9 nm closer to the runway. To facilitate establishing on the ILS LLZ at that range, the controller offered a descent to 500 metres QFE (equivalent to 2230 feet QNH) at the flight crew’s discretion which the crew accepted and set 2300 feet as the target altitude. ATC instructed the flight to establish on the ILS LLZ from the present heading 220° maintaining 170 KIAS for as long as possible to avoid minimum separation from following traffic.

The descent was commenced in ‘Open Descent’ mode but almost immediately, as the aircraft was passing through approximately 3000 feet pressure altitude, the controller advised that there was no longer a separation issue and the speed requirement was cancelled. With the gear down and the slats/flaps at position ‘3’, the airspeed mode was changed briefly to ‘speed managed’ mode with the target speed reduced to 143 knots, which resulted in a slow decrease in speed. However, nine seconds later, this was changed back to ‘selected speed’ mode at 170 knots and speed began to increase to that level from a minimum of 158 knots. Approximately ten seconds later, with the aircraft about to capture the 2300 feet target altitude, the target was changed from 2,300 feet to 3,000 feet (which was above the procedure initial go-around altitude) and vertical speed setting was selected to 2,000 fpm.

As the descent continued without having established on the LLZ, the radar controller instructed the flight to maintain the 220° heading to the final approach point (P) at 500 meters QFE (2230 feet QNH), provided the airport QNH of 1015 and instructed the crew to contact TWR. The crew did not reply to this transmission and 10 seconds later, the aircraft had just descended through 2000 feet QNH at 170 KCAS and was now on a heading of 210°. A few seconds later, the Radar Controller called again and instructed the flight crew to “maintain 500 metres height at QFE 994 (QNH 1015) and stop further descent”, repeating this three times and following with the advice that their transponder readout indicated a height of only 110 metres (360 feet) above the runway elevation. As this 17 second-long communication from the controller commenced, FDR data showed the flap being changed from configuration ‘3’ to ‘full’ with the aircraft 1,660 feet pressure altitude. Four seconds after it had finished, the selected vertical speed was changed from -2,000 fpm to +2,500 fpm and two seconds after that with the aircraft descending at 1,600 fpm, a go-around was initiated and declared by the Captain to ATC. 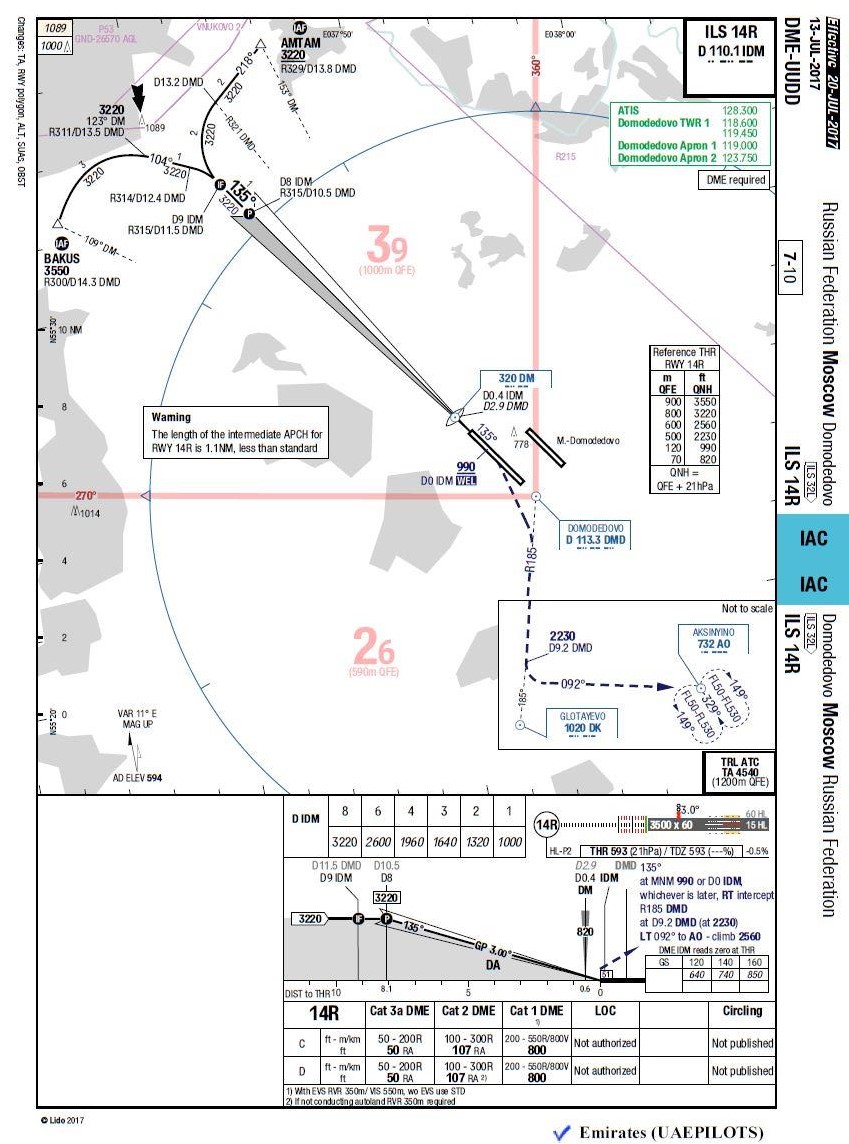 The 14R ILS Chart as used by the flight crew. [Reproduced from the Official Report]

At this point, the aircraft was turning left through 197° towards the ILS LLZ and descending through 1,140 feet QNH (504 feet agl) but still over 7nm from the runway. Almost immediately, a 6 second long EGPWS ‘PULL UP TERRAIN AHEAD’ Warning was annunciated at 474 feet agl and at 7.3 nm from the runway threshold. The minimum radio altitude recorded during EGPWS activation was 395 feet agl.

The Radar Controller responded to the go-around declaration by instructing the flight to initially continue on its present 200° heading climbing to the equivalent of 3,550 feet QNH and when he subsequently asked for the reason for the go-around. The Captain replied that the approach had been unstable.

Radar vectoring was then provided to a second approach and this time, the track passed approximately over the IAF at waypoint ‘AMTAM’ and followed the procedural track to the ILS 14R LLZ as shown on the chart. A closing radar heading of 220° was given and the flight transferred to TWR. The aircraft started to descend below the IF procedure altitude and was established on the LLZ at the final approach point ‘P’ and 100 feet below the GS. Ninety seconds after this, the Captain declared another go-around and the aircraft levelled off at 2,600 feet QNH, the final altitude for the MAP. The flight was instructed to turn onto 070° and contact radar. Vectoring for a third approach was then commenced and when the radar controller asked for the reason for the go-around, the Captain again replied that the approach had been unstable.

Vectoring for the third approach followed a similar base leg track to the first and on reporting fully established on the LLZ, the flight was transferred to TWR and the sector completed without further event.

It was noted that the observed weather conditions were VMC throughout and were benign in all other respects including visibility in excess of 10km and no cloud below 4000 feet which would have ensured that the landing runway lights would have been visible during all three approaches. No evidence was found that indicated that fatigue played any part in the investigated events.

It was concluded from the FMS ‘BITE’ data that the reason for the second approach being discontinued was that following the go-around, the FMS had not been reconfigured in accordance with the applicable SOP and that this precluded LLZ capture.

Absence of the CVR data meant that it was difficult to assess flight crew communication, flight deck authority gradient, the efficiency and effectiveness with which checklists, briefings and call outs were performed and in the interaction between the two pilots. Nevertheless, the following findings were made in respect of the way the aircraft was managed:

The Causes of the Serious Incident were formally determined as:

A total of 7 Contributory Factors were also identified as follows:

Safety Action taken by Emirates as a result of this event was noted to have included enhancements to relevant pilot training and to the way in which related procedures were documented.

A total of 6 Safety Recommendations were issued as a result of the Investigation as follows: