On 29 July 2017, an Antonov AN-74 crew sighted several previously unseen large eagles rising from the long grass next to the runway as they accelerated for takeoff at Sao Tome and, concerned about the risk of ingestion, made a high speed rejected takeoff but were unable to stop on the runway and entered a deep ravine just beyond it which destroyed the aircraft. The Investigation found that the reject had been unnecessarily delayed until above V1, that the crew forgot to deploy the spoilers which would have significantly increased the stopping distance and that relevant crew training was inadequate.

On 29 July 2017, an Antonov AN-74TK-100 (UR-CKC) being operated by CAVOK Airlines on a non-scheduled international positioning flight from Sao Tome to Accra as CVK 7087 overran the departure runway in normal day visibility after the crew attempted a high speed rejected takeoff following the sighting of multiple large birds ahead and ended up in a ravine just beyond the end of the runway and was destroyed by impact forces. One of the six occupants sustained a minor injury, the others were uninjured. 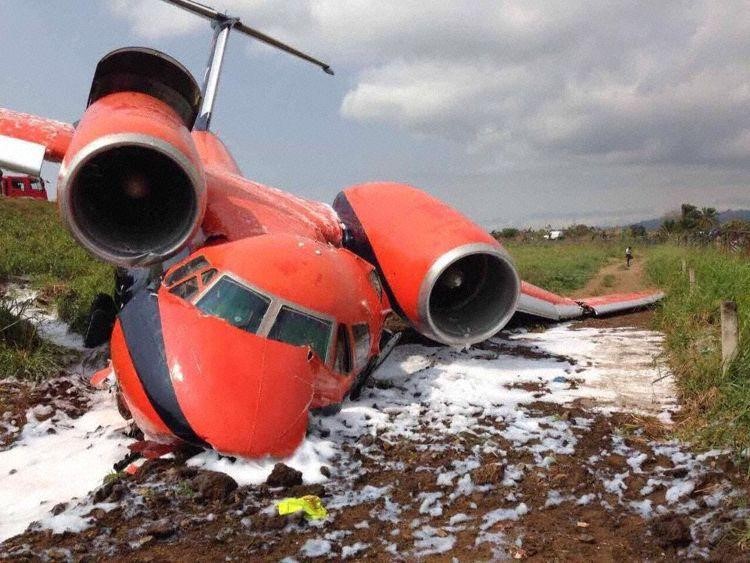 The wrecked aircraft in its final stopping position after the excursion. (Reproduced from the Official Report)

It was established that the previous day, the aircraft had arrived in Sao Tome from Stavanger via Luxembourg and Ghardaia (Algeria) as a non-scheduled cargo flight. The following morning, the same crew prepared the aircraft for a flight to Accra which included refuelling the aircraft with an uplift of 5,700kg. Once ready to go, TWR initially issued a clearance to taxi to runway 11 as marginally favoured by the very light surface wind across the runway but the crew expressed a preference for runway 29 and their request was approved. It was noted that no information about the possible presence of birds on the runway, which is the subject of a cautionary note in the AIP entry for the airport, was given.

Once cleared for takeoff, it was commenced with the First Officer as PF. According to the subsequent statement of the Captain, "five or six eagles had flown up from the runway and been dangerously close to the aircraft". He had instructed the Flight Engineer to check that the runway lights were on and to carefully monitor the engine instruments. The crew “asserted” that the birds had appeared from the grass next to the runway as the aircraft was accelerating through about 100 knots and had not previously been seen. The Captain took over control of the aircraft from the First Officer and reported that after assessing the situation for around four seconds that it was appropriate to abandon the take-off due to the risk of losing both engines. At that same moment, the crew heard a bang, which they suspected was a bird strike and it was followed by warnings of “Left Engine Failure”, “Dangerous Vibration” and “Takeoff is prohibited”. The available recorded data showed that the rejected takeoff began from 120 knots about five seconds after the birds were first sighted. The Captain instructed the Flight Engineer to deploy the thrust reversers and began braking but at about 70 knots, realising that this braking was not enough, he used emergency braking. Then, with about 200 metres of runway left, and having realised that it would not be possible to stop on what was left of the runway, he had begun to intentionally turn to the right with the intention of extending the available stopping distance and trying to avoid entering the ravine located just 15 metres beyond the end of the runway.

It was found that the crew had failed (presumably inadvertently) to deploy the speed brakes/spoilers during the rejected take off and noted that this action would have made a significant contribution to slowing the aircraft both directly and by indirectly facilitating enhanced braking effectiveness which may have enabled the aircraft to be stopped on the runway. Just before the aircraft left the end of the runway at its right hand edge at a speed of approximately 40 knots, the Captain instructed the Flight Engineer to close the fuel emergency shutoff cock. After leaving the runway, the aircraft then continued for about 95 metres as it plunged into the ravine (see the illustration below) at which point impacts led the forward fuselage to separate from the bulkhead located immediately to the rear of the flight deck. The TWR controller saw the aircraft leaving the runway and immediately alerted the ARFS who went to the crash site and applied foam to the wreckage to prevent any risk of fire breaking out before rescuing the occupants.

The initial post-crash inspection conducted by the Investigation did not find any immediate physical evidence of a bird strike in the vicinity of the engine or visible within the left engine, although bird remains were visible embedded in the nose landing gear. However, a subsequent engine inspection by the manufacturer’s representative found “fragments of birds feathers” at various locations within the left engine - fan blades, slots between the guide vanes, the cavity of the lower engine mount strut and embedded in the main engine cowling - which confirmed that a bird encounter of some sort had occurred. 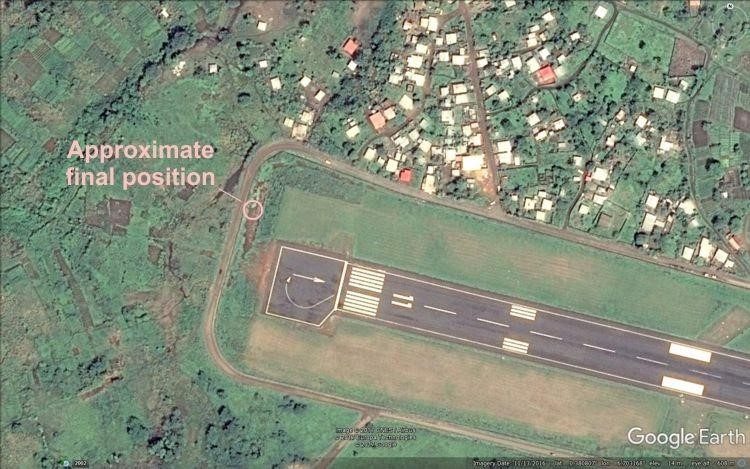 The western end of the runway showing the aircraft final stopping position in the ravine. [Reproduced from the Official Report]

The recovered bird fragments and photographs of a dead bird found on the runway were sent to specialists in Ukraine. Their report suggested that the fragments of feathers probably belonged to the recovered dead bird which “might have been ingested into the left engine as a result of being ‘overtaken’ by the aircraft from behind during takeoff”. Noting that the engine had failed immediately after surging for no apparent reason, it was also considered equally possible based on the nature of the impact that the aircraft had impacted and ingested part or all of a bird in flight during the take-off roll just before the left engine surge occurred. No final conclusion as to the origin of the bird remains which had entered the engine was therefore drawn but the bird species involved was likely to have been a juvenile Common Honey Buzzard, Pernis apivorus, a diurnal carnivorous species in the area known to be a ground feeder which seeks insect food in grass not kept short.

NB: Although not mentioned in the Official Report, the mass of a juvenile Common Honey Buzzard would have been significantly less than the 1.8 kg up to which current EASA and FAA certification requirements are that ingestion of a single bird at takeoff thrust shall enable at least 50% thrust to be obtained for at least 14 minutes provided there is no thrust lever movement on an affected engine for at least 15 seconds after impact.

Although it was not suggested that it would have necessarily have prevented the accident bird strike, it was noted that the usual runway inspection to check for the presence of the birds was not carried out prior to the departure despite this being a requirement of the Airport Wildlife Control Programme.

The Investigation considered that having taken control when the birds appeared ahead, the Captain had unnecessarily delayed initiating a rejected takeoff until the aircraft was 10 knots above the applicable V1. He stated that his action was “motivated by a state of emergency and aimed at minimising the consequences of the occurrence, since an aircraft overrun during the takeoff is obviously less dangerous than an aircraft impact at failure of two engines at the initial stage of the climb”. However, it was noted that he had specifically requested runway 29 when runway 11, also 2130 metres in length, was equally suitable when aware that there was a steep ravine just over 30 metres from its end with a “major road” just beyond it outside the perimeter fence.

It was also found that none of the sequence of normal checklists required to be completed prior to takeoff included the item “Take-off Briefing” despite the fact that the Ukrainian CAA had reviewed these checklists on 21 February 2017 and approved them. There was therefore no definition of the responsibilities of individual members of the four man flight crew in the event of any unexpected emergency or abnormal condition - or adequate crew training in support of safe rejected takeoffs. This alone was considered to have resulted in degraded CRM with the consequence that interaction between crew members was not optimal.

In respect of the overrun, it was determined that if the rejected takeoff had been initiated at or before the correctly calculated V1 of 108 knots the aircraft, which was almost 7 tonnes lighter than the MTOW of 34.8 tonnes, should have been able to accelerate normally and then stop within a total distance of 1500 metres, some 660 metres before the end of the runway as long as maximum braking was applied and the spoilers deployed. It was also concluded that even with delayed and moderate braking, initiation of the reject by V1 and use of the spoilers/speed brakes should have resulted in the aircraft being brought to a full stop without leaving the runway. It was only “the combination of the reduced braking effectiveness and RTO initiation speed which resulted in the runway excursion”.

It was noted that as published in the AIP, 2160 metre long runway 29 has neither a RESA, nor a Stopway and did not meet the applicable ICAO standards for a runway strip which only extends 10 metres beyond the end of the runway - a 60 metre strip which extends before the threshold and beyond the end of the runway or stopway is required. Only 30 metres from the end of runway 29, there is the steeply sloped ravine followed by a major road adjacent to the airport perimeter fence. It was noted that although the Captain of the accident aircraft was aware of the ravine and had sought to avoid it, it was not included in the Sao Tome AIP entry.

The Cause of the Accident was determined as “the rejection of the takeoff at a speed above decision speed V1 due to the presence of birds on the runway which is inconsistent with the Standard Operating Procedures (SOPs) of CAVOK Airlines”.

The Final Report of the Investigation was published on 5 December 2018.