On 1 April 2009, the flight crew of a Bond Helicopters Eurocopter AS332 L2 Super Puma en route from the Miller Offshore Platform to Aberdeen at an altitude of 2000 feet lost control of their helicopter when a sudden and catastrophic failure of the main rotor gearbox occurred and, within less than 20 seconds, the hub with the main rotor blades attached separated from the helicopter causing it to fall into the sea at a high vertical speed The impact destroyed the helicopter and all 16 occupants were killed. Seventeen Safety Recommendations were made as a result of the investigation.

On 1 April 2009, a Eurocopter AS332 L2 Super Puma being operated by Bond Helicopters on a scheduled passenger flight from the Miller Offshore Platform to Aberdeen in the cruise at an altitude of 2000 feet in day Visual Meteorological Conditions (VMC) crashed into the sea after a sudden and complete loss of control caused by a major mechanical failure. The helicopter was destroyed and all 16 occupants were killed. 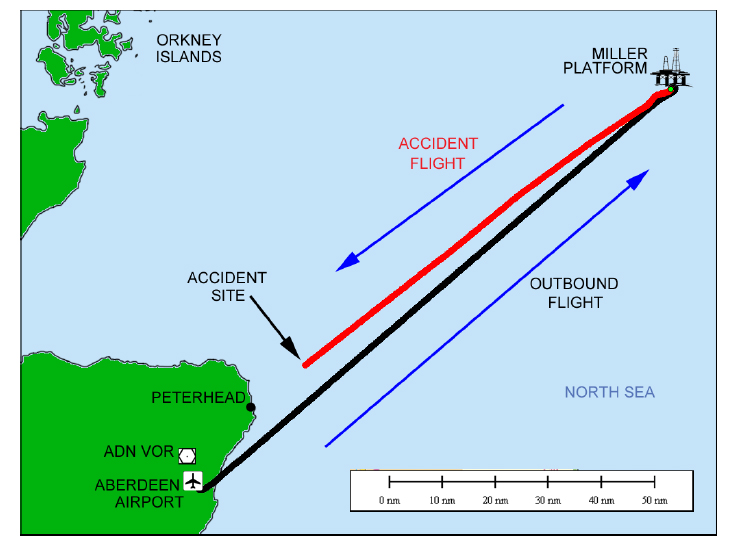 An Investigation was carried out by the UK AAIB. During the first four months of the work, two Interim Reports and one Special Bulletin were published to highlight critical airworthiness matters and present corresponding Safety Recommendations which prompted Manufacturer and Regulatory safety action.

The helicopter was equipped with a Combined Voice and Flight Data Recorder (CVFDR) which was recovered and successfully replayed. Non Volatile Memory (NVM) Data from the Health and Usage Monitoring System (HUMS) data card containing information from the operations conducted on the day of the accident was also recovered. This information was then merged with the rest of the operator’s ground station maintenance database to form a complete record. NVM data was also recovered from the Digital Engine Control Units (DECU), the Flight Deck EFIS Displays, the Digital Flight Data Acquisition Unit (DFDAU) and the Helicopter Operations Monitoring Programme (HOMP) data card (HOMP is the helicopter equivalent of fixed wing OFDM).

It was established that 12 seconds after the First Officer had made a routine transmission, a MAYDAY call was made from the helicopter. With the benefit of a credible eyewitness report from a ship approximately two nm from the accident site in the prevailing good visibility, it was apparent that that the hub with the main rotor blades attached had separated from the helicopter at altitude since they could be seen descending to the sea surface separately.

The analysis of all the evidence showed that there had been a catastrophic failure of the helicopter Main Rotor Gearbox (MGB) with the loss of all its oil pressure just 2.5 seconds after the end of the First Officer’s routine radio transmission. Twenty seconds after that, the main rotor and part of the epicyclic module attached to it had separated from the fuselage and the main rotor blades had struck the tail boom in several places severing it from the fuselage. The subsequent impact of the fuselage with the surface of the sea had occurred at a high vertical speed and had been non-survivable. 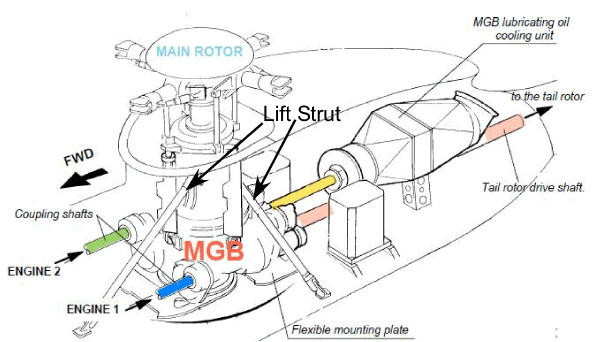 A diagram of the transmission layout - reproduced from the Official Report where it appears as Figure 4.

The Investigation found that the failure of the MGB had been initiated in one of the eight second stage planet gears in the epicyclic reduction module of the gearbox. One of these planet gears had fractured as a result of a fatigue crack for which a precise origin could not be determined. However, analysis did suggest that the crack was likely to have been in the loaded area of the planet gear bearing outer race.

The Investigation noted that reduction of the 23000 rpm output from the turboshaft engines to the 265 rpm main rotor blade speed takes place in the MGB in two stages. The lower section of the MGB, referred to as the ‘main module’, reduces the input shaft speed to around 2,400 rpm and the epicyclic reduction module, located on top of the main module, then reduces this output to around 265 rpm.

It was found that there was one aspect of maintenance history which was relevant to the eventual failure sequence:

“A metallic particle had been discovered on the epicyclic chip detector during maintenance on 25 March 2009, some 36 flying hours prior to the accident. This was the only indication of the impending failure of the second stage planet gear”

In respect of this particle, it was noted that the possibility of a material defect in the planet gear or damage due to the presence of foreign object debris could not be discounted. It was also noted that this particle had been released from a position near the edge of the outer race of the failed gear which had not been recovered.

Other findings included that:

The Investigation formally identified the Causal Factor as “the catastrophic failure of the Main Rotor Gearbox was a result of a fatigue fracture of a second stage planet gear in the epicyclic module”.

In addition, the Investigation formally identified the following Contributory Factors:

The following six initial Safety Recommendations were made during the course of this Investigation.

A further 11 Safety Recommendations were issued at the conclusion of the Investigation: