On 21 November 2006, the crew of a Bristow Eurocopter AS332 L2 making an unscheduled passenger flight from an offshore platform to Den Helder in night VMC decided to ditch their aircraft after apparent malfunction of an engine and the flight controls were perceived as rendering it unable to safely complete the flight. All 17 occupants survived but the evacuation was disorganised and both oversight of the operation by and the actions of the crew were considered to have been inappropriate in various respects. Despite extensive investigation, no technical fault which would have rendered it unflyable could be confirmed.

On 21 November 2006, a UK-registered Eurocopter AS332 L2 being operated by Bristow Helicopters on an unscheduled passenger flight from a Dutch offshore platform K15B to Den Helder in night Visual Meteorological Conditions (VMC) made a controlled ditching after the crew perceived flight control difficulties which would preclude the completion of the flight. A PAN and subsequently a MAYDAY were declared. All 17 occupants were subsequently located and rescued and just one sustained a minor injury. 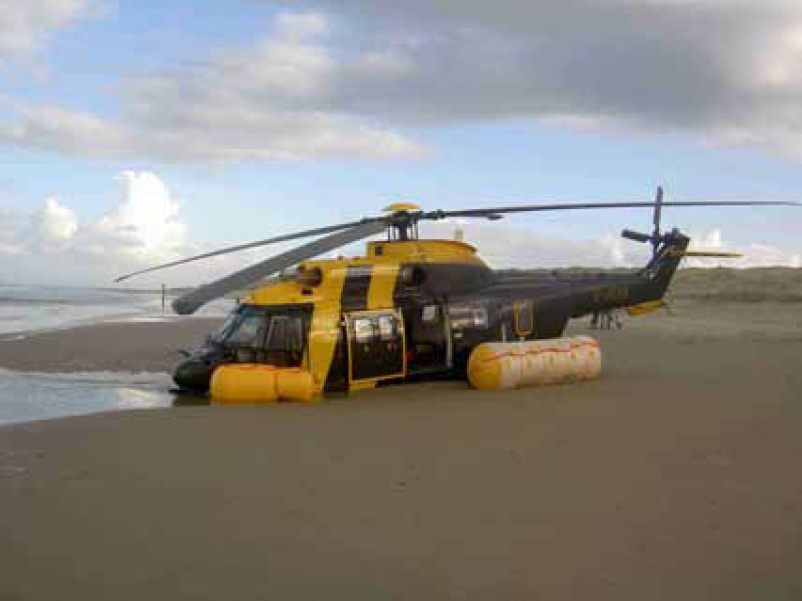 An Investigation was carried out by the Dutch Safety Board. Their investigation - and the resulting Final Report - was concerned not only with the immediate malfunctions which led the aircraft commander to decide to ditch the aircraft and the consequences which followed but also with the circumstances which led to the flight being conducted. The latter aspects are not covered by this summary. Whilst the Investigation was in progress, a ‘Preliminary Report’ was published on 21 December 2006 followed by an ‘Intermediate Report’ on 29 March 2007. The aircraft was fitted with a combined CVFDR which was recovered and successfully downloaded.

It was established that the flight was being operated at the request of the Dutch Coastguard as a SAR operation because of a power failure on the offshore platform which it was considered required the evacuation of personnel there. The helicopter had positioned to the platform concerned from its base at Den Helder with the pilots and two rear crew members, the winch operator and the winchman, on board. The 13 passengers were boarded at the platform with engines and rotors running and the flight then departed for the 25 minute flight to Den Helder. Four of the passengers took the only available passenger seats and the remainder sat on the floor. The two rear crew members, who were wearing headsets and were able to communicate with the pilots had knelt on the floor in the middle of the cabin.

It was established that the PF throughout the accident flight, including the ditching that eventually occurred had been the 39 year old First Officer who had a total flying experience including licence training of 1200 hours of which all had been on helicopters and 200 had been obtained in the accident type in the year since joining the fleet. The 33 year old aircraft commander had been a professional helicopter pilot for nine years. She had been given a command on the Bristow SAR operation at the beginning of 2006 without previous experience of the aircraft type to be flown since when she had acquired 165 hours experience in that role.

Seven minutes after take off, in the cruise at an altitude of approximately 3000 feet, abnormalities in the instrument indications, particularly the rotor rpm, for the no 1 engine began to be observed by the crew although there were no corresponding warnings and normal response to power lever movement continued. When, a minute later, the PF stated that he was going to slow down because of this, the commander responded by declaring a PAN and requesting descent to 1000 feet. The PF disconnected the AP ‘upper modes’ and asked the commander to get out the Emergency Operating Procedures (EOPs). The commander responded by saying that she did not know where to look for them and the First Officer said he didn’t either.

Two minutes after the PAN declaration, a warning triggered by a difference in rotor rpm between the engines of more than 7.5% was annunciated. Normal engine control was still available but a minute later, the PF stated that he “had some restrictions on the (flight) controls” and thereafter stated that this appeared to be getting worse. Soon afterwards the commander transmitted a MAYDAY advising of “steering and engine problems” and stating that a diversion to the nearest land, the Island of Texel, was intended. Shortly after this message had been passed, the First Officer “announced that he was going to ditch the aircraft because he was losing control” and the commander immediately responded by advising ATC of this. The rear crew transmitted a MAYDAY direct to the Coastguard on a different frequency but did not give a position and shortly afterwards, at the second attempt, a successful ditching was accomplished 15 minutes after lift off from the platform. FDR data indicated a 6° nose up attitude and a groundspeed of 19 knots shortly before water contact. The Automatically Deployable Emergency Locator Transmitter (ADELT) deployed as designed after ditching and began transmitting.

The evacuation in a sea state estimated to have been 4/5 was problematic and a key subject of interest for the Investigation. All occupants managed to leave the helicopter but neither of the life rafts could be released and by the time one of the rear crew had re-entered the cabin and retrieved bag containing the air-droppable life raft. The extraction and inflation of this raft was eventually achieved but not before it and the two crew had drifted away from the helicopter and the other occupants who had meanwhile formed several small groups. Eventually, one group of 10 and another of 5 formed, with the latter remaining at the helicopter using one of the float grab ropes.

Recovery of all occupants from the water was achieved by a combination of surface vessel and helicopter resources, by which time the group of ten were some 500-800 metres distant from the still-afloat helicopter. The final recovery was the two rear crew on the life raft who were picked up by a surface vessel just over an hour after the ditching. Difficulties in deploying both life rafts led to the Investigation issuing three interim recommendations (only referred to in Appendix ‘C’) relating to the problems encountered. Two were resolved by the issue of Eurocopter SBs and the actions proposed by the third were deemed inappropriate by European Aviation Safety Agency (EASA).

The Investigation noted in respect of the apparent technical malfunctions affecting the helicopter:

“Both Eurocopter and Bristow confirmed that given the initially observed engine readings, the flight crew could have abandoned troubleshooting and continue the flight normally. However, neither Eurocopter in its AS332L2 Flight Manual nor Bristow in its Operating Manual provide clear and unambiguous information on what is expected from flight crews when non-standard operating conditions emerge. The Safety Board emphasises the need to provide flight crews with clear information and handling instructions if system behaviour noticeably differs from the standard. In the investigation of a serious incident with a Super Puma in the North Sea in 1998, it was already concluded that there is a need for flight crews to improve theoretical understanding of the engine control system.”

In respect of the perceived flight control problem, the Investigation concluded that there was insufficient evidence to conclude that autopilot hydraulic switching took place in the minutes before the ditching and that it was unlikely that an intermitted switching of the autopilot hydraulic system could have resulted in the reported control restriction. It was therefore concluded that, although a technical cause could not be found for the reported control problem, the existence of a cause could not be excluded.

It was also observed that:

In respect of the flight crew and their decision making, it was concluded that:

The Investigation devoted considerable attention to an analysis of the situation once the ditching had occurred and found various safety-related issues and deficiencies.

Other findings included that certain aspects of crew training at Bristow were inadequate and that the Company’s “supervision and management review of the Den Helder SAR base unit operations had shortfalls associated with documentation, procedures, training, feedback and analysis”. It was also considered that “the UK Civil Aviation Authority oversight repeatedly reported shortfalls regarding Bristow’s Quality and Safety System in 2006-2007, but did not (lead to) the necessary structural improvements”.

Eleven Safety Recommendations were made by the Transport Safety Board as a result of the Investigation as follows:

The Final Report of the Investigation (which includes the Factual Information in accordance with ICAO Annex 13 reporting format as Appendix ‘C’ of the complete Report and which contained three Safety Recommendations not also replicated in those included in the Recommendations in Chapter 9 of the Report) was published on 23 February 2010.