On 23 August 2013, the crew of a Eurocopter AS332 L2 Super Puma helicopter making a non-precision approach to runway 09 at Sumburgh with the AP engaged in 3-axes mode descended below MDA without visual reference and after exposing the helicopter to vortex ring conditions were unable to prevent a sudden onset high rate of descent followed by sea surface impact and rapid inversion of the floating helicopter. Four of the 18 occupants died and three were seriously injured. The Investigation found no evidence of contributory technical failure and attributed the accident to inappropriate flight path control by the crew.

On 23 August 2013, a Eurocopter AS 332 L2 Super Puma helicopter being operated by CHC Scotia on a contract commercial passenger flight from the Borgsten Dolphin drilling platform to Aberdeen was about to complete a non precision approach to runway 09 at Sumburgh in day Instrument Meteorological Conditions (IMC) when, already below the applicable instrument approach minima, a sudden and rapid descent from low altitude occurred which resulted in the helicopter striking the sea surface about 1.7nm west of the airport. The airframe became inverted on impact but remained afloat. Four of the 18 occupants died and 14 survived, three of whom, including the aircraft commander, sustained serious injuries. The airframe subsequently broke up and became partially submerged. 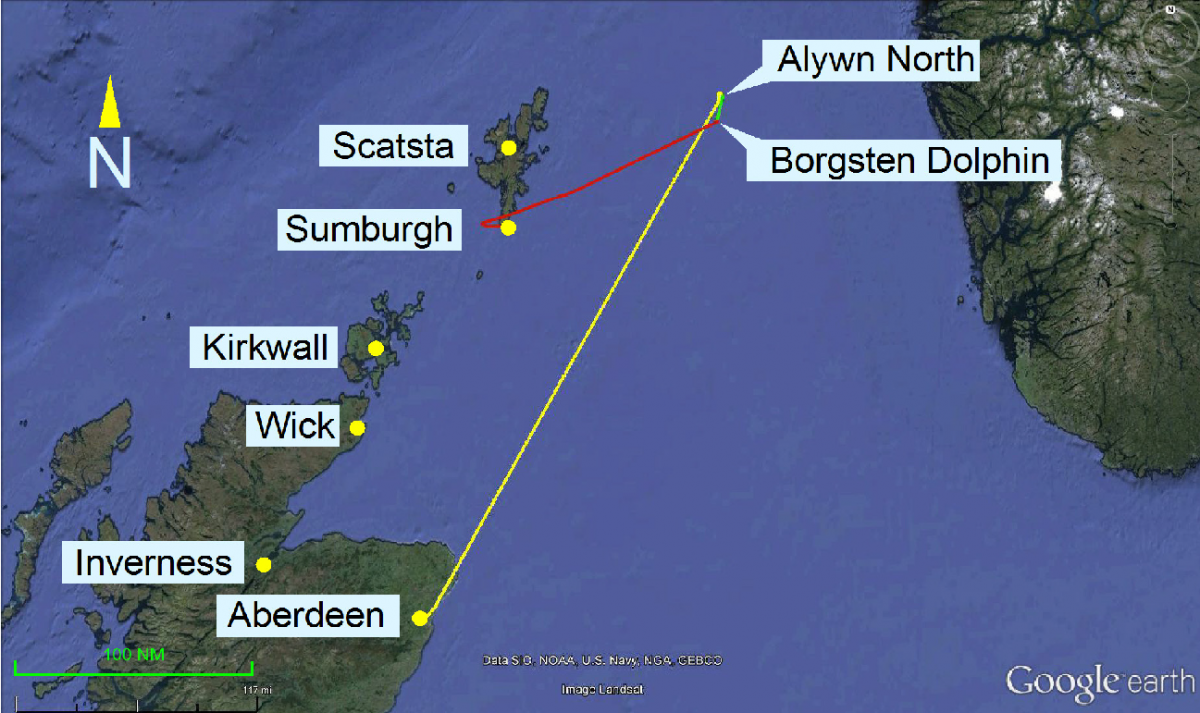 An Investigation was carried out by the UK AAIB. Recovery of significant parts of the wreckage including the tail boom containing the Combined Voice and Flight Data Recorder (CVFDR) was completed on 29 August. The CVFDR was found to contain a complete record of the accident flight and some items of avionics equipment, identified as containing potentially useful Non Volatile Memory content were retrieved from the recovered wreckage and their data recovered. A radar record of the approach was available which was found to continue until just before impact.

It was found that the 51 year-old aircraft commander had 10,504 total flying hours which included 1894 hours on type. He had been employed by CHC on offshore operations for 16 years and was familiar with operations into Sumburgh. The 40 year old First Officer was found to have joined CHC just over a year earlier following experience flying small single-engine, single pilot helicopters and had qualified as a line pilot on the accident type in late February 2013.

It was established that the aircraft had been en route from the Borgsten Dolphin Platform to Aberdeen and had been planning to land at Sumburgh only to refuel. On nearing Sumburgh, it had been radar vectored onto the final approach track for the LOC/DME approach to runway 09 (see the corresponding chart included below). The Sumburgh Airport weather conditions passed to the crew by ATC half an hour prior to the accident were a surface visibility of 2800 metres in mist and cloud SCT/200 feet and BKN/300 feet and these were found to correspond to the conditions promulgated in the METAR timed three minutes after the accident had occurred. The aerodrome elevation was noted as being 21 feet amsl.

It was established that the aircraft commander had been PF for the accident flight and had flown the approach entirely in IMC with the AP in 3-axes using V/S Mode. MDA for the approach was 300 feet. It was found that "although the approach vertical profile was maintained initially, insufficient collective pitch control input was applied by the commander to maintain the approach profile and the target approach airspeed of 80 kt". As a result, insufficient engine power was available and airspeed reduced continuously as the approach continued. Despite the First Officer's 100 above (MDA) call and automated CHECK HEIGHT call outs at MDA both verbally acknowledged by the commander, descent continued below MDA. As airspeed continued to reduce, the First Officer "drew the commander's attention to the airspeed which was now about 35 knots and the helicopter was descending at 1000fpm". The commander acknowledged and "began to increase the collective" but shortly after the automated 100 feet above the surface automated call out had occurred, control was lost and water impact at around 1800 fpm occurred. Shortly before impact, the First Officer armed the helicopter's Emergency Floatation System so that although it had "rolled upside down and rapidly filled with water" on impact, it had remained afloat. The four fatalities included two who "did not escape from the upturned fuselage" and two died before being rescued.

Both pilots were interviewed during the Investigation but “neither pilot was able to explain exactly what had happened during the latter stages of the approach to Sumburgh, nor why it had happened". The Commander "stated he had no recollection of events between the time the helicopter passed 4 DME and just before impact, when he caught sight of the sea surface and attempted a recovery" and that "it had been his intention to carry out up to two approaches at Sumburgh and then decide on where to divert". The Investigation found that during the accident flight, there was "no attempt to obtain an up-to-date weather report for Scatsta, the nominated alternate airport, or any other potential alternate airport during the accident sector, even though the weather at Sumburgh was deteriorating" and that "the approach was commenced without the crew having established that there was an available alternate with acceptable weather" when in fact, the nominated alternate, Scatsta was no longer viable due to poor weather conditions. However, the Investigation did subsequently estimate that the helicopter had had sufficient fuel available at the time of the accident to reach Wick or Kirkwall (although not Inverness or Aberdeen). At that time, the weather conditions at Wick were favourable for a diversion. 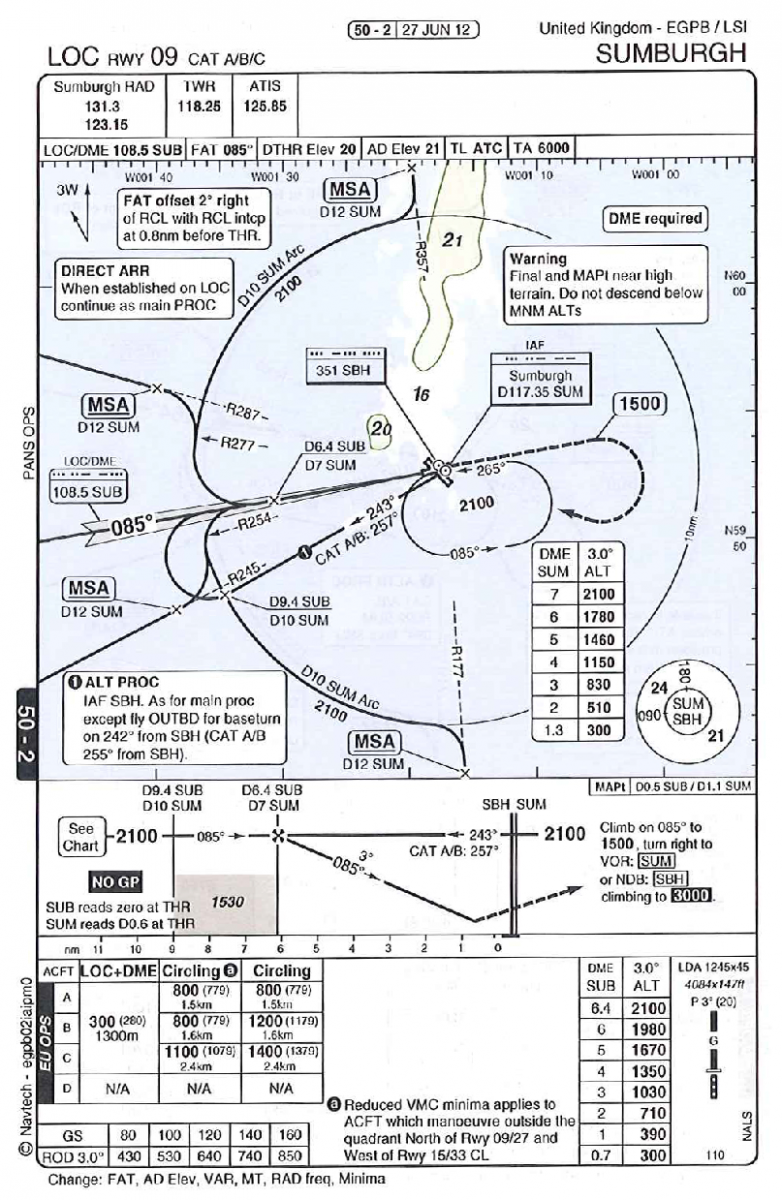 Noting that, although the First Officer had raised the possibility of a diversion due to the deteriorating weather at Sumburgh, the Investigation found that the Commander had "expressed several times the view that a diversion would not be necessary and they were likely to be landing at Sumburgh" which, it was considered, "suggests that, despite his earlier briefing, he had not formulated an alternative plan and his focus had narrowed to landing at Sumburgh". The possibility that there was any previous case of the Commander continuing an onshore approach to land in weather below the applicable approach minima was examined and it was found that during the year preceding the accident, there was no evidence of this in respect of his 29 approaches to Sumburgh or his 267 approaches to Aberdeen.

The Investigation noted that the First Officer had stated after the accident that "he did not consider that he had received training on the specific duties of the Pilot Not Flying (PNF) in respect of how to monitor the progress of an approach, or of how to monitor the other pilot during an instrument approach". He had also stated that "he considered that he had not received guidance as to when, as PNF, he should look outside during an approach to acquire the visual references required for landing".

Having established that there was "No evidence....of a causal or contributory fault with the helicopter either before or during the accident flight" the Investigation focussed on the operational aspects and the post crash response. A review of the recorded flight data by the helicopter manufacturer concluded that the loss of control had been a direct consequence of combination of a nose-high attitude, low airspeed, high rate of descent and high power which had placed the helicopter in a Vortex Ring entry condition (also known as “settling with power”). The Investigation concurred with this explanation of the loss of control and noted that, given the limited height available at that point, recovery to controlled flight would have been "difficult, if not impossible".

It was noted that the helicopter was not fitted with a GPWS/TAWS, nor was it required to be. It was also noted that similar helicopter types operating in the UK Offshore sector, such as the Airbus Helicopters EC225, were fitted with a Honeywell Mk XXII EGPWS compliant with the applicable RTCA/DO-309 standard for 'HTAWS' and certified by EASA.

Operation of the helicopter at the time of the accident was noted as having been subject to an AOC issued under JAR-OPS 3 with oversight of the Operator being the sole responsibility of the UK CAA who, in that capacity, had therefore approved the CHC Operations Manual (OM). The Investigation found variously that:

In respect of the accident sequel - the evacuation of the occupants and survivability issues generally, the Investigation found that whilst the water impact was survivable, different specifics had led to the four fatalities:

In respect of those who evacuated successfully and survived, it was found that:

In addition, the following four Contributory Factors were identified:

The Investigation "determined that the causal and contributory factors identified in this accident are unlikely to be particular to this flight crew and therefore appropriate safety action should be taken in order to prevent future similar accidents".

Extensive Safety Action was taken on various issues highlighted by the Investigation whilst it was in progress by CHC Scotia, the UK CAA and Eurocopter (since renamed 'Airbus Helicopters') and is detailed at various points in the Official Report.

A total of 28 Safety Recommendations were made as a result of the Investigation as follows:

On 18 October 2013, two Recommendations were made as follows:

A further 26 Recommendations were made at the conclusion of the Investigation as follows:

Three Special Bulletins were published during the course of the Investigation to report progress - on 5 September 2013, 18 October 2013 and 22 January 2014 - and the Final Report was published on 15 March 2016.